Anybody use a turning /moldboard plow? 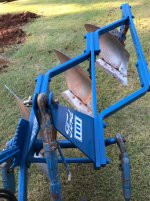 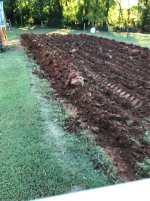 running a moldboard is one of my favorite things to do but I do it very rarely. Sod-breaking and that is it. If the disc or tiller can break it up I'll run that every time but thats because my soil is pretty sandy and only about 8 inches of topsoil.

I don't know what it is but there is something methodical about watching the soil roll and seeing a field of perfectly straight furrows. Doing it with an old gasser and having the governor kick down and pour a little more fuel in getting that tractor to lug makes it just that much better.
Nov 26, 2019 #14

Just used a 16" single bottom this fall to turn part of my property that was pasture into a garden. Probably won't use it on that area again for a few/several years as I'm trying to build up a nice thick layer of topsoil, and wanted to start by burying the grass and planting a winter cover crop as the biggest problem with my soil seems to be the lack of organic matter.

Use and frequency of tillage equipment (and practices) varies greatly by area and soil type. Overall the trend (in the US at least) is toward doing as little tillage as possible, the driving reasons being: preserve soil structure, prevent erosion, reduce soil compaction (from both driving across the field as well as the implement's shearing along a bottom soil layer), and reducing fuel overall usage.

Most of that has resulted in use of implements other than a moldboard plow ....however, I have heard of a few exceptions (in Australia) this being one: GCTV12: Mouldboard Ploughing - Pros & Cons - YouTube
Nov 26, 2019 #15

OP is loosening 65 years of compacted top soil as well as killing 65 years of sod root base. Moldboard plow would certainly be my choice. Being in LA I'm assuming he doesn't have the benefit of freeze/thaw during the Winter to mellow this turned sod. The plowing will be the easy part of this project. Maybe a Roto-Tiller after the sod has died?
Nov 26, 2019 #16

ovrszd said:
OP is loosening 65 years of compacted top soil as well as killing 65 years of sod root base. Moldboard plow would certainly be my choice. Being in LA I'm assuming he doesn't have the benefit of freeze/thaw during the Winter to mellow this turned sod. The plowing will be the easy part of this project. Maybe a Roto-Tiller after the sod has died?
Click to expand...

Well folks the plowing is going well, I didn't wuiet get through to day but weather permitting tomorrow I will be dome with it in a couple hours. My plan is to llet the patch set a few months before I disc it . here are a couple pics !

This year I converted 6 acres of fields that were in hay for the last decade, disc harrow would barely scratch the root base. I bought a double turn plow and turned it all over- then disked and crossed disked until the field was leveled and smoothed.
You are doing the right thing with the moldboard/turn plow.
Nov 28, 2019 #19 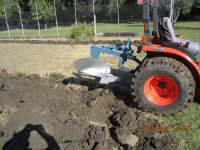 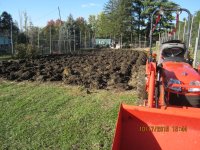 Did you get all your Fall work done Mike?? Farmers up here are still struggling to get their crops out. Very little Fall tillage work done.

Happy Thanksgiving to you my friend.
You must log in or register to reply here.