Art of the dump trailer

Just got a 12' dump trailer to go along with the 16' equipment trailer I've been using and there is definitely a learning curve. I've made about 14 dumps so far and I'm figuring it out.


So far all of dumps have been good expect the last two. One before last I loaded too tail heavy and things got interesting when I got up to speed... The one after that I loaded too front heavy and it wouldn't dump. Glad I kept my 16'er so I could go get the mini ex and remove a piece of concrete sidewalk and one scoop of soil.

My son has a 16ft tandem dump trailer; I do know we front loaded it too heavy once and it wouldn't dump. Now we keep it light up there and a bit heavy in the back.
May 27, 2021 / Art of the dump trailer #5

I overloaded my Big Tex 10LX with gravel once. It didn't look like that much until we crossed the scales. I figured we'd have to open the gates and shovel some out but it lifted it right up with the tailgate open about 4 inches so I could meter it on the driveway.
May 27, 2021 / Art of the dump trailer #6
N

If you do enough loads, you’ll get an idea on how much weighs which amount. In the last year, I’ve started working on a lot of demo sites. When I ordered my trailer, THAT activity wasn’t even on my radar. I monitor the loader closely, while loading. Loaded correctly, my job is easy, minus the amount of nails in tires I have to deal with.

One mistake people tend to make is they like to put the heavy stuff at the bottom. This makes sense, during transport, but makes unloading more difficult.

Tree brush goes on the bottom, logs or heavy parts go on top. This keeps the stuff in the trailer, during transport, and makes tarping easier. When you go to dump, the small twigs (in the brush) will easily slide past and break on the D-rings, if the heavy stuff is on top, using the brush to slide on. If the heavy stuff is on bottom, it gets stuck easier. Be careful that all logs are laid in front to back. If you don’t, they can roll, when the trailer is lifted up. I’ve heard of some rolling out and hitting the doors, causing damage. I’ve had a couple roll out, but no damage. It can also be dangerous.

For concrete or big rocks, put a layer of dirt down. Again, if you use the heavy stuff as a cap, instead of a base, dumping is much easier.

Heavy loads get put over the axles, as possible. This is good for towing and dumping. I’ve had enough variety in what I’ve put in my trailer I have a pretty good idea how to load it, for proper weight distribution. Of course, doing demo work, you don’t always get to go in the ideal order.

Take note of where your lift points and hinges are. Keep those in mind, while loading heavy stuff.

Keep a shovel handy. I keep at least one in the toolbox. It’s handy when you’re loaded too front heavy or when stuff gets stuck, inside. Remember, do not stand where the load will land. Major safety issue. If stuff is stuck, use a shovel to break it up, but stand to the side as much as possible.

Also keep a 24-36” prybar handy. I had a log get stuck in the ramp mounts and it was much too heavy to move, by hand. Me and another guy put out weight behind a 36” bar and got it to move enough to come off.

I ran a 2 AWG set of cables from my truck battery to trailer battery. If you’re using the trailer much, do this. I did a detailed write-up, on a couple of other forums, which I’ll come back and link. I also have a high idle setup, on my gas F-350. I use it when I know the load is heavy or loaded poorly. It further retards voltage drop.

Upgrading to 14-ply tires was a huge benefit. I went with Hercules H901’s and won’t use a lesser tire ever again. There are a few other brands built to at least the standard of the H901. I do sone work with a guy who bought the comparable “Americus“ brand. They are holding up well, too.

I’ve had one blowout, while traveling. Of course, I was loaded at around 4.5T (not far from payload capacity). Lifting a loaded dump trailer, in summer, is a terrible experience. Have a proper bottle jack handy as well as a way to get lug nuts off. Also, have a proper spare that’s weight rated, for your load.

Make sure you locate ALL of the grease zerks. Grease often. Use the safety bar, when you’re under the bed. The lift linkage has several zerks, you’ll be under there a while. Don’t risk your life unnecessarily.

Low battery is the cause of most problems, with electric over hydraulic pumps. If you don’t have gravity down, the first sign of a low battery is the fluid will come back into the reservoir too quickly and will blow out the relief. On the power down (opposite of gravity down, some pumps offer both), the pump controls the fluid return rate and a low battery doesn’t control it enough. The next most likely problem is a solenoid giving out. My first one burned up within a couple of weeks. That was replaced, by KTI (the hydraulic pump maker). That one lasted around two years. I am on my third (first one was bad off the shelf, for the most part). I also have a backup I keep, in the truck.

For fluid, I use the least expensive ATF Wal-Mart has.

Im going to post this, now. Scared I’ll accidentally delete it and I don’t want to type it all, again.

Here is a link, to the 2 AWG setup, on a forum you can see the pictures without having an account.

Here is the tree limb that got stuck. It wouldn’t have happened, had we out it on top. this was after we used the pry bar. 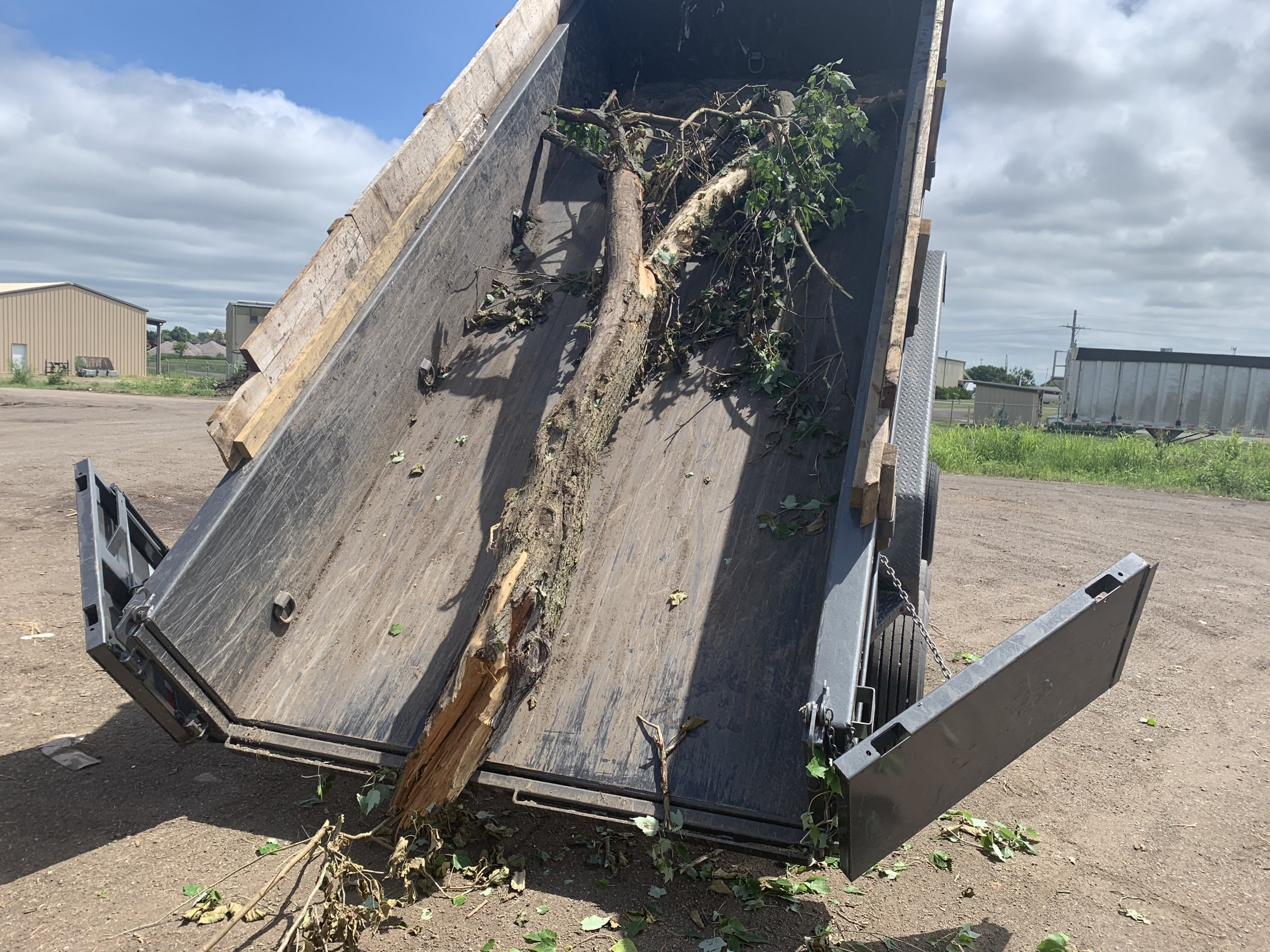 This is how I currently have my trailer toolbox set up: 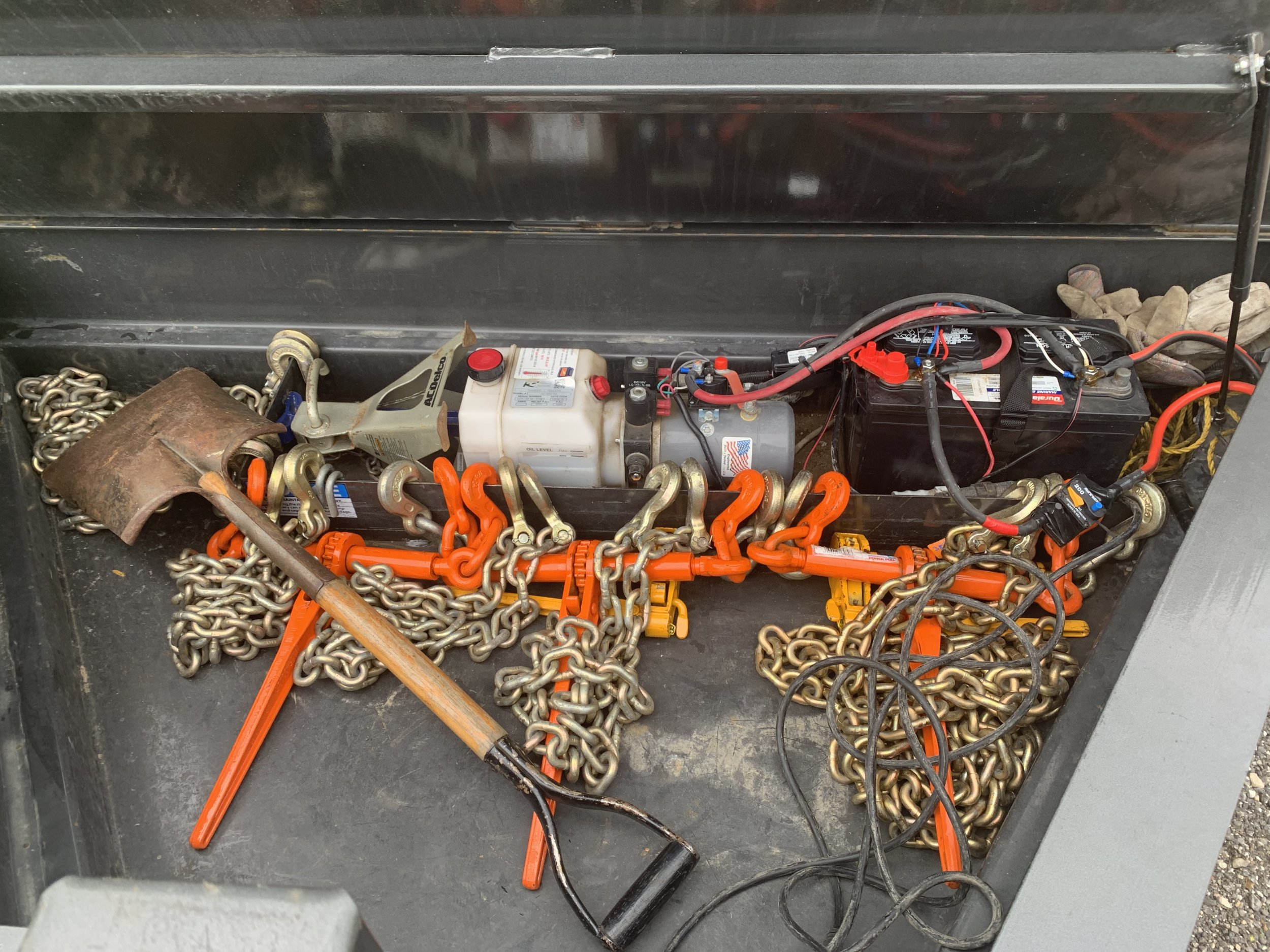 From the blowout. I was able to back it onto the blacktop. 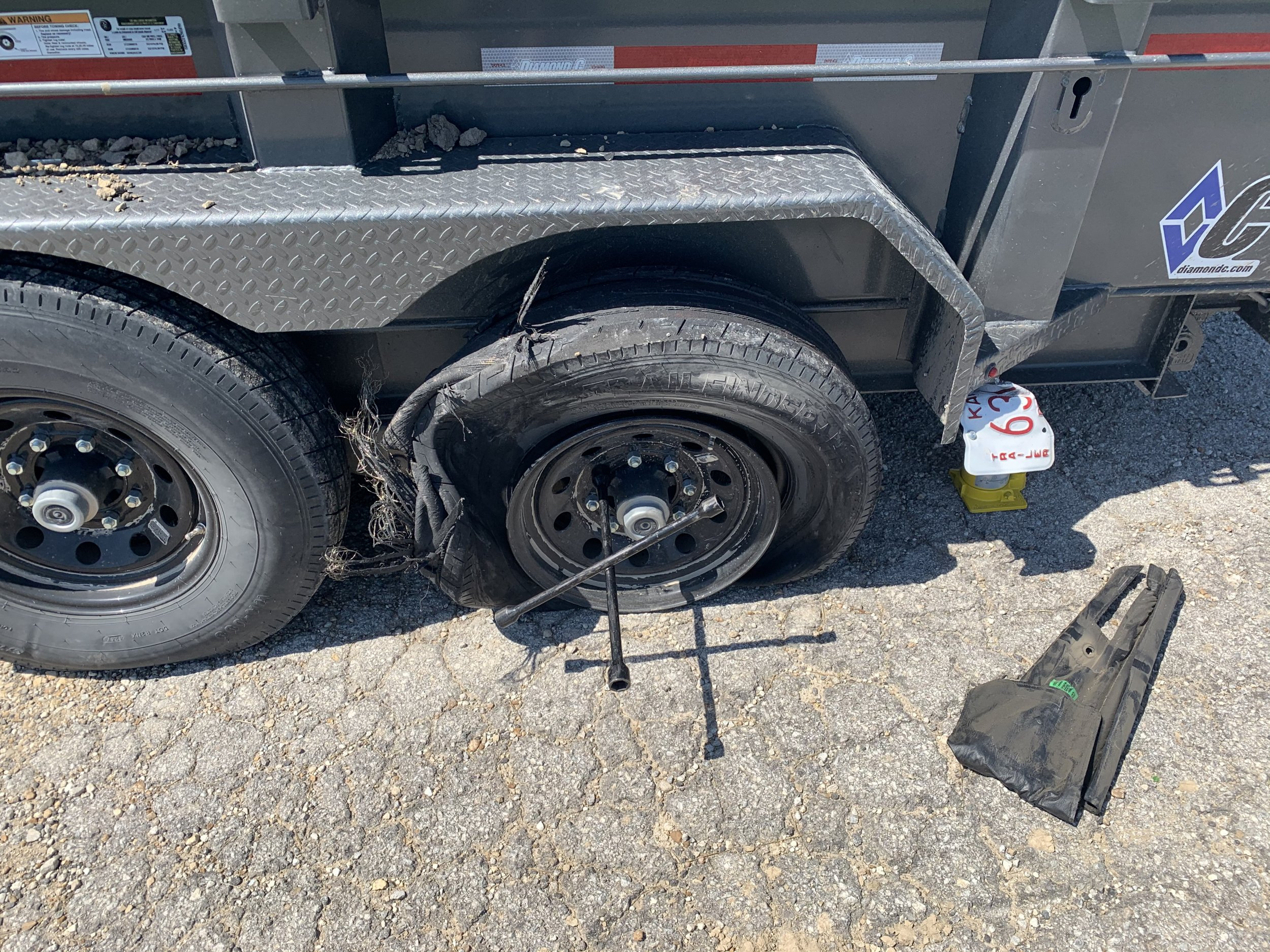 What I bought it for (this was my first load, 3T small river rock): 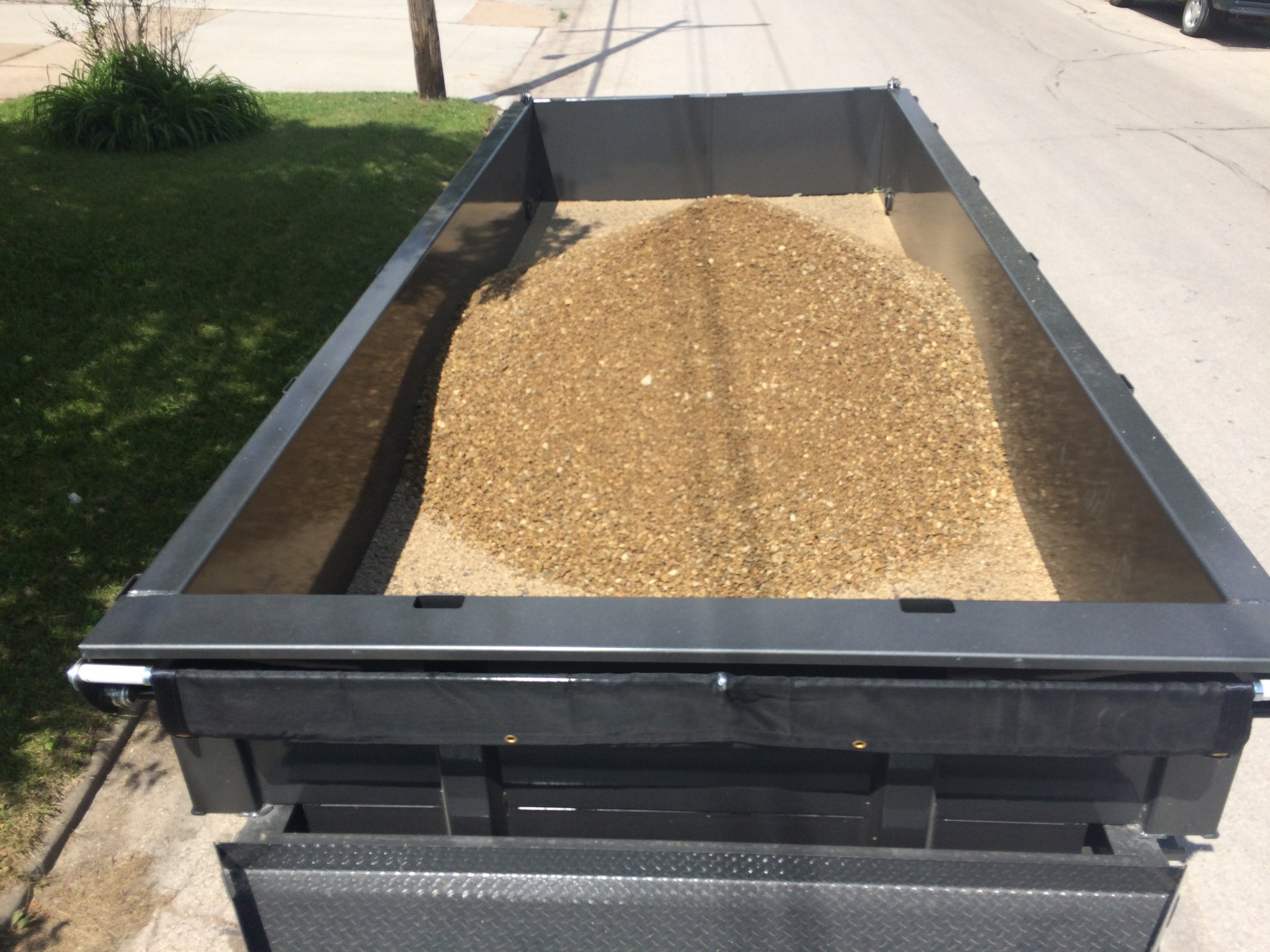 Thus us what I’ve been doing, lately: 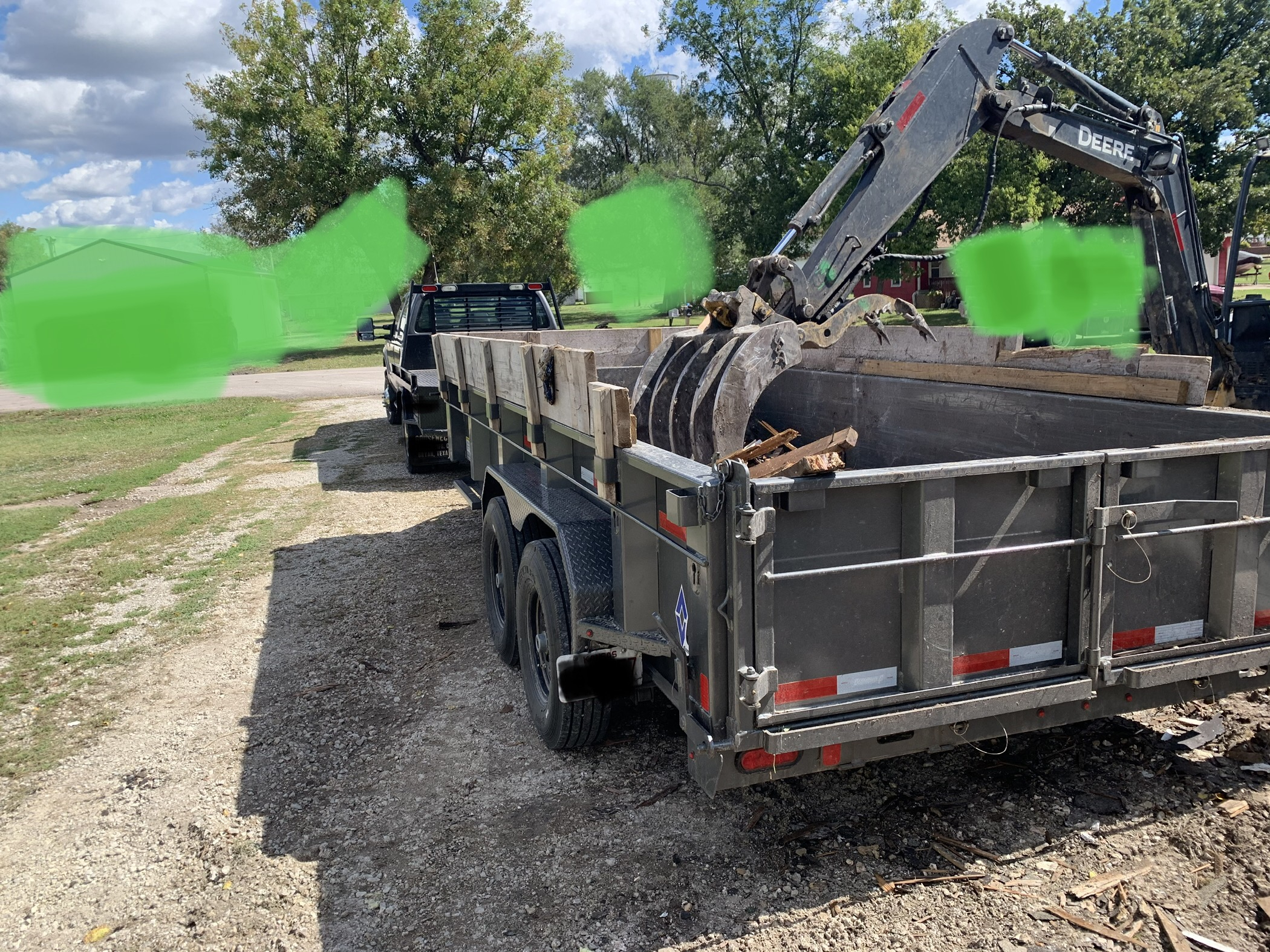 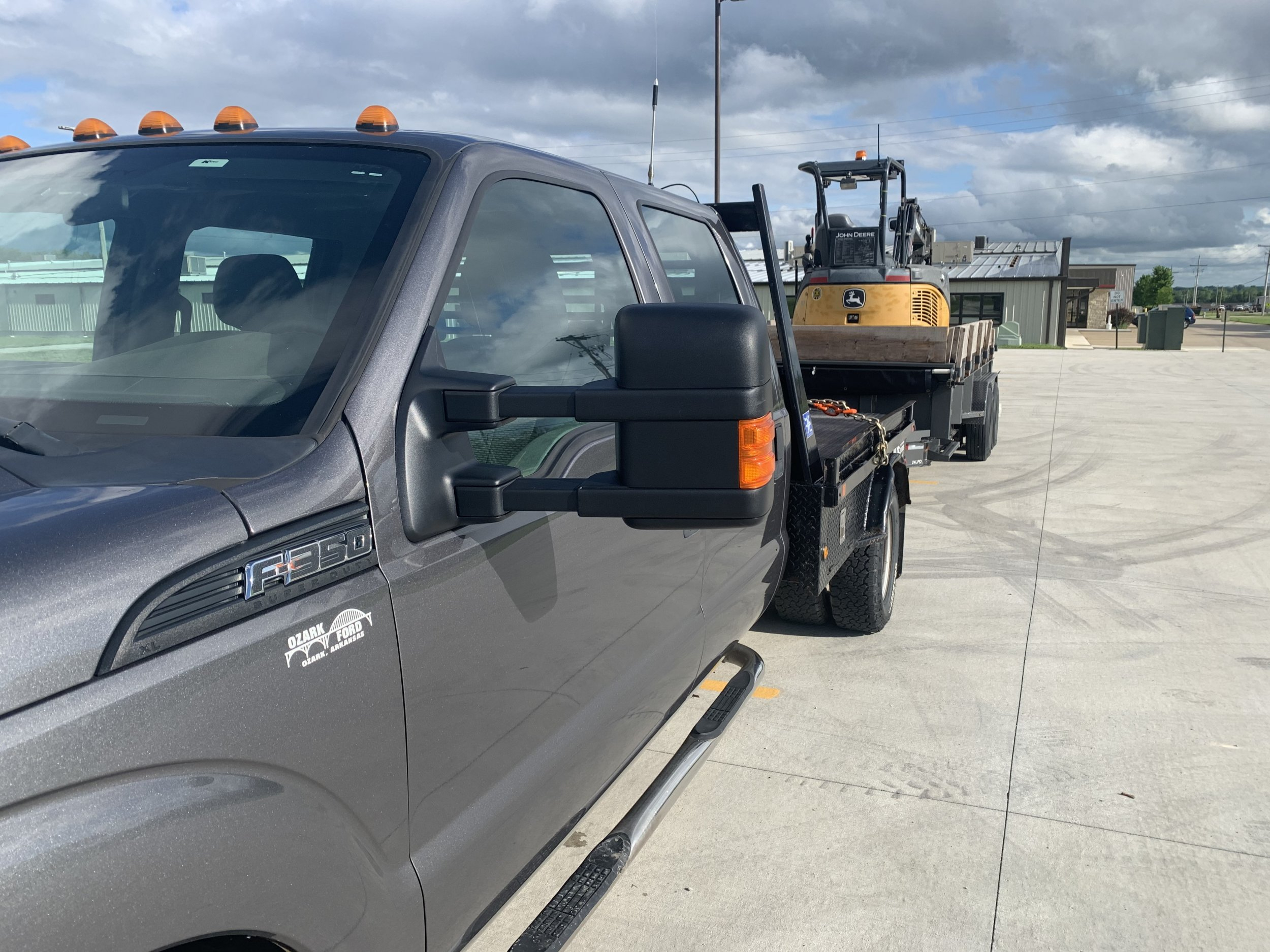 nikerret said:
Here is the tree limb that got stuck. It wouldn’t have happened, had we out it on top. this was after we used the pry bar.

This is how I currently have my trailer toolbox set up:

From the blowout. I was able to back it onto the blacktop.

What I bought it for (this was my first load, 3T small river rock):

Thus us what I’ve been doing, lately:

I would be scared to death working around those thick green clouds
May 28, 2021 / Art of the dump trailer #9
N

dirttoys said:
I would be scared to death working around those thick green clouds
Click to expand...

If you're hauling wet dirt to mud spray down the bed with wd-40 and will all slide right out. Doesn't take as much wd-40 to coat the bottom of the bed as you would think.

Generally any wet material will stick to the bed and not want to slide out. I've had freshly dug moist dirt freeze to the bed once before I learned the wd-40 trick.

As mentioned, on a tandem axle dump center your load on the front axle or when you buy get an end dump. That's the one with the telescopic cylinder on the front. usually way more dump capacity than the trailer can handle. I can put an extra 2k or so on the pin and it dumps just fine.
You must log in or register to reply here.
Share:
Facebook Twitter Reddit Pinterest Tumblr WhatsApp Email Share Link