Hello all,
I purchased my CK2610HST May of 2020. The glow plug light on the dash has not worked since I purchased the tractor. It does not work when I turn the key backwards and hold or when I turn it forward to the first position. The tractor starts every time.
Can anyone with a newer CK2610 please describe how their glow plug light works with key in either direction.
Any help would be greatly appreciated.
Jun 17, 2021 #2

I am not familiar with the dash on CK models but are you sure the glow plugs are working?

I also am not aware that it should come on in both directions with the key. I would think it is one or the other. Models with a glow plug timer usually will have a light and that comes on with key and turns off with glow plugs.

Manual ones usually has some other element that glows when energized. Hopefully someone with a CK model will chime in.
Jun 17, 2021 #3

Thank you guys for the replying. I just checked again tonight and the glow plug light still does not come on in either position. Does anyone know where the glow plug relay is?
Thanks again guys. I greatly appreciate the help.
Jun 21, 2021 #5

Look under the right side of the dash above the brake pedal and make sure all the plugs are plugged together. My hour meter wire was unplugged from the factory. Might be somewhere else, but there are several on that side.
Jun 21, 2021 #6

The glow plug relay is on the left side, if needed. 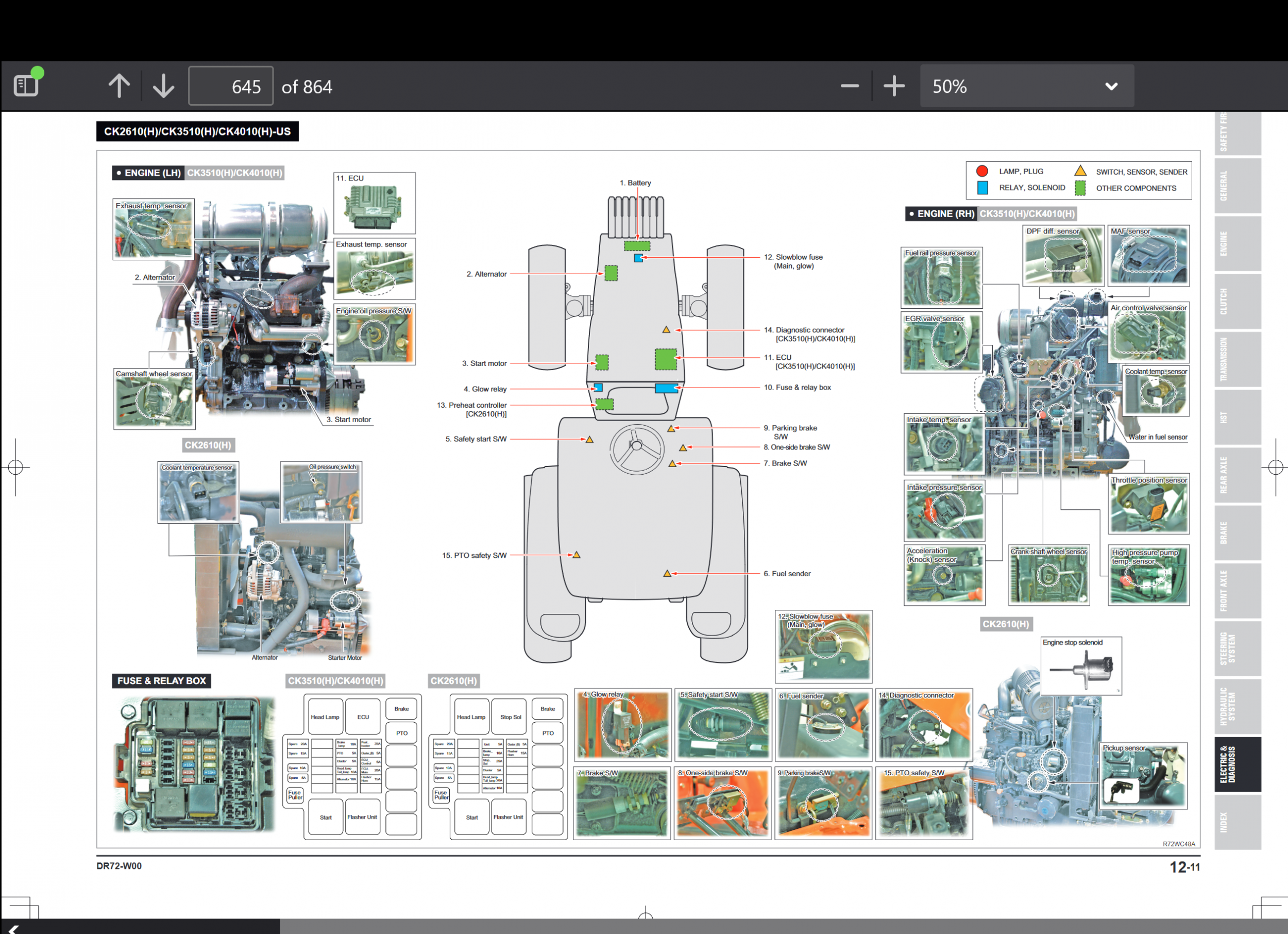 Hi Paul,
I have a 2018 and I believe there may be an ambient/coolant temp sensor in the circuit. Since it's been hot outside, I've noticed my glow plug light doesn't illuminate, but the engine fires off in an instant. When the temps are cold, the light is on for a short time, or longer if it's really cold and I turn the key to the left and hold it. I just searched my owners/operators manual and there's nothing about the light not coming on when it's warm.
Patrick
Jun 22, 2021 #8

Is your dealer local to fix it?

Looking at the schematic, I do not see how the glow plug relay would affect the light indication on the dash, but maybe it's internal to the Preheater Controller seeing current flow to the glow plug relay coil. I would look above the glow plug relay (it's the one in photo with large red wire), located as stated on the left side just above the clutch pedal. I was going to say check that the connector shown is fully engaged, BUT it also controls fuel related components, so the tractor would not run.

I do love Kioti documentation- on page 12-71 they call the box 'Preheat Controller', then on page 12-73 it is now called the 'Safety Controller'. The box is making sure the coolant is less than 20 C/ 68 F to initiate the glow plug energization by picking up the glow plug relay via pin 12, and turns on the dash light via connector pin 11.

Seems like the box is working functionally on everything else, just not the glow plug light. I would check that the temperature sensor is fully connected (appears to be a three wire connector) but haven't a clue where it is. In the factory service manual page 12-11 it shows it on the block just above the alternator as posted above, but mine only has a allan type plug installed there. Gotta love it!!

For what it's worth, Toukow

Didn't mean to submit the above post, but oh, well.....I would do a quick check and put a finger on the glow plug relay and see if it clicks when turning the key on and temperature below 68 degrees indicating a light LED issue. Oh, I did find the temperature sender and it's located just underneath where the top radiator hose connects to the engine, on the right side of the block. Good hunting.....
Jun 25, 2021 #10
OP
P