So I've got a very, very nice set of Craftsman USA made sockets with assorted goodies. Both in 6 point deep and shallow and 12 point deep and shallow in 1/4, 3/8, and 1/2 inch drive. Along with all the 6 and 12 point box wrenches. All made in the USA. My father and I pitched in the early 2000's to basically "build up" this fantastic set of tools. I have never lost a socket or wrench, I've busted a few being young and dumb, but always head on eBay to source USA stamped replacements. Although now that it's starting to get up there in years since Craftsman was making them in the USA, they are harder to find in certain sizes if I do happen to bust one. (Hasn't been recently, cause I've been careful knowing how hard they are to locate!)

I know that the newer Craftsman products are made in China. Has anyone had any issues with sockets or box wrenches failing?

I've also been getting some other odds and ends from Pittsburg/Kobalt/Tekton. Pretty much mostly Pittsburg, because I've broken stuff before and I go right into Harbor Freight and they just allow me to get a replacement. Tekton is mostly made in Taiwan, but some stuff made in China, but I've had to send their stuff in, because Lowes was weird about it.

My question is, was it a mistake to buy an alternate set of Pittsburg (and some of the other brand) tools? Like offset wrenches, extra sockets, long reachers, and odd tools? Or should I have went somewhere else?

I mean they work, and I've never had an issue with HF tools for the most part.

I'm sorry if I don't buy the vanity branded Snap-On or Matco... I can afford it, but with the money spent on the main Craftsman stuff, I've never had an issue. So please don't start a war on that topic/label me...

It's also interesting, I recently tried finding an alternate set of shallow 6 point 1/2" drive sockets, and very, very few manufacturers make them. Everything is all 12 point -- with the exception of impact grade Cr-Mo sockets.

Now I do wrenching for friends and neighbors, but I'm not in it for actual business, like doing it everyday to make it as my primary job. Although, I got two vehicles on yard that are two friends that need brake jobs and some front end work, I am waiting parts for them. Due to cost and job problems, folks are leaning on friends like me to do auto work at a "realistic" cost. So I expect to be wrenching more into the Winter and Spring. With the extra cash I get, I build it into more gizmos and tools to make my life a heck of a lot easier.
Sep 12, 2021 #2

i have as much harbor as craftsman tools, i honestly never broke either, also have a kobalt set. use what makes you happy, not what other people say.
Sep 12, 2021 #3

Even some of the high end (Snap, Mac, etc) tools are now being made in China. I guess it comes down to how easy it is to get replacements if they do break.
Sep 12, 2021 #4

Tekton are good tools. US company with most tools made in Taiwan, most of the rest in the US, and few in Canada or China.

We’re a family-owned company in Grand Rapids, Michigan. We’re dedicated to making the best hand tools you’ll ever own, and we start by designing the products that we personally believe in and want to own ourselves.

Best part though is their guarantee with is pretty much like the Craftsman's was: If it has their name, they will replace it. Period.

Once a tool becomes yours, we're available to help you no matter where you got it or how long ago. If your tool doesn't work like it should, let us know and we'll make it right.


That said, I have never broken a Pittsburg or Kolbalt or even a Stanley. Use what you want, like and/or can afford and be happy.
Sep 13, 2021 #5

I bought a large Craftsman set years ago, sockets and wrenches, all USA made. I recently wanted to expand my wrench set to include sizes > 18mm ( I already had SAE up to 1-1/4"). Ironically, it was $100 cheaper for me to buy a new 15pc set which included the 11 wrenches I already had plus the 19-22mm, and the Jumbo set which had 23, 24, 25 , 27, 30mm rather than to buy the 5pc Jumbo set and the four 19-22 wrenches individually. Although the "new" duplicate wrenches had the same Craftsman part number, they were missing the "Forged in the USA" stamp and there was quite a noticeable difference when comparing same size wrenches side-by-side. The "ring" of the metal sounded very different too. The older wrenches were more polished and the box end was much finer, less "clunky" looking. I wound up keeping the old duplicate wrenches and selling the new 8-18mm "11pc" set on Craig's List. I figure that absolute precision is not as critical once you get to 20-30mm. I don't know if Craftsman still has lifetime replacement but I've never broken a wrench or socket so that doesn't matter.

I agree with @Midniteoyl that at this point it doesn't much matter since nothing is as it was a dozen or so years ago. Tekton or HF as far as I am concerned since they at least stand behind their products. Even if quality-wise they are throw-away tools at least you aren't throwing your money away with them.
Sep 15, 2021 #6
OP
D

Great replies. Thanks for the advice folks gave.

I think having what I'm running now is sufficient.

For what it's worth, Craftsman is still lifetime. Just if you were to trade a broken USA stamped tool, you'll get a Chinese clone with the exact same part number. Lowes has no problem doing it.

I also found out that there is a secret way to get "specialty" tools like for example shallow 1/2" drive 6 point sockets from Craftsman and that is by going to/calling one of their independently owned stores and special ordering them. I had a little time on my hands earlier this week, cause I was curious. Supposedly there is a catalog for Sears dealers only at least according to one Sears store owner I spoke with. Quite and interesting going about doing business. But if I recall correctly, even in a regular Sears store they had those Craftsman full catalogs with every single part number of tool.

There are a couple other Craftsmen special tools I might order... we'll see. It's just easier to go to HF and get the Pittsburgh. lol
Sep 16, 2021 #7

Hmm, about 15yrs ago, maybe more, I was told by Sears they quit honoring the 'no questons asked' warranty and required a receipt and you be the original owner. Then later I was told the lifetime was no more, even for the original owner. Thats when I quit buying.. Then they went through their bankruptcy thing and all of them around here shut down. Of course, Craftsman is not Sears anymore but is Stanley Black & Decker and is sold every where.

Wiki says that they are still suppose to be lifetime, but that there have been problems getting it, so who knows.. Nice that Lowes around you is honoring it.

This all works well but is cheap stuff. Why worry endlessly about a warranty on a socket with a 2$ value. People pay 2$ for a bottle of water but have a fit if they bust a 2$ tool that is basically a consumable anymore.
Got to wonder, pay 3$ for gas and piss and moan and 16$ a gallon for water.
Sep 16, 2021 #9

My sockets and ratchets are -Snap On, Mac and Proto. I've got a set of impact sockets for the REALLY tough stuff. They are much tougher than "normal" sockets and can take all the abuse.
Sep 16, 2021 #10

As for the tools, use them. The made in China is as good as the Sears has been prior to 1980 when they figured to chase HF and
Walmart to the bottom instead of trying to swipe the SK spot and catch Target. All this stuff is basically the same anymore, the Kobalt, Cman, the Klutch, same stuff different stamp. The good news is it has all got better and way cheaper, I use it, every day for decades. 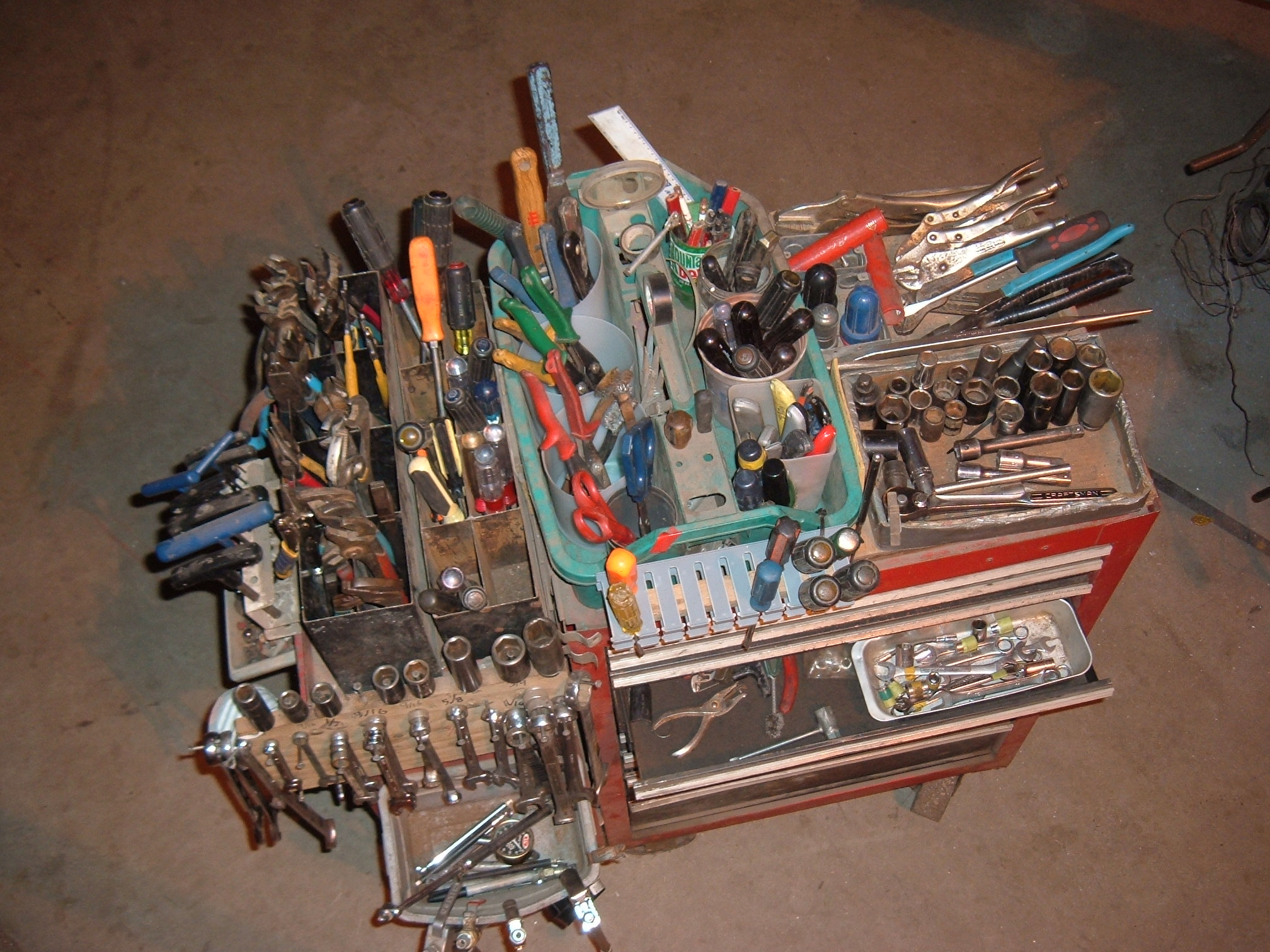