Assuming the grit in the head is the common ingredient found in many types of head gasket fix, I don’t need to worry about it remelting below 800c

“Liquid glass” (sodium silicate) is added to the system through the radiator, and allowed to circulate. Sodium silicate is suspended in the coolant until it reaches the cylinder head. At 100–105 °C sodium silicate loses water molecules to form a glass seal with a re-melt temperature above 810 °C.
Jan 13, 2023 / CT225 head gasket? #22
OP
C

The ck25 kioti is the closest equivalent to the ct225. The trick is both the Bobcat and the kioti have mid model changes that happened on different schedules. The engine in my rig is a daedong td1300lxe. The ck25 head bolts and gasket was a match. The kioti dealer had most of what I needed I stock, whereas the bobcat folks were telling it takes months for them to receive in stock parts from the big warehouses and no expectations for made to order stuff. For instance, the instrument cluster shroud that showed in stock, that was ordered from a bobcat dealer, took 10 weeks to be delivered to them. I’ll work twice as hard to find a kioti cross referenced part before I call bobcat again. The coolant hose and intake gasket that the kioti didn’t stock was a 5 day lead time and they offered to ship it to me because I told them they are an hour + drive from my house.
Jan 23, 2023 / CT225 head gasket? #23
OP
C

Gator6x4 said:
If that is a photo from your expansion tank, if mine I would pull the radiator and take it to a radiator shop and have them to clean it. That is a lot of gunk floating around in a radiator.
Click to expand...

I took your advise and had the radiator checked by a local shop. Thank you, I would have never thought to have it checked without you're suggestion! The shop tried to "boil it out", next they pulled the tanks off an tried to clean the passages my mechanical means both attempts to save the radiator was a fail. They said it was like "cement" and plugged up beyond repair. One week and $750 later they had the unit re-cored. I was shocked but it's still better than a new one at $1314.24 and god knows how long till Bobcat bothers to ship it out.
Jan 23, 2023 / CT225 head gasket? #24

Clearly prev. owner did not take good care of this CT225, sorry you started tractor ownership with these experiences. Like me and snowmobiles.
Jan 23, 2023 / CT225 head gasket? #25

Wow! I feel bad for you. Can you identify a failure in the head gasket? The reason I ask, is the real chance of a crack in the head or block. The head can be magnaflux checked for cracks, but the block can't (unless it's all apart...). The lower section of the block is probably caked up pretty good with that gunk, as well. It'd probably be a good idea to pop out the freeze plugs and get in there with some strong brushes and/or scrapper tools.

gstrom99 said:
Wow! I feel bad for you. Can you identify a failure in the head gasket? The reason I ask, is the real chance of a crack in the head or block. The head can be magnaflux checked for cracks, but the block can't (unless it's all apart...). The lower section of the block is probably caked up pretty good with that gunk, as well. It'd probably be a good idea to pop out the freeze plugs and get in there with some strong brushes and/or scrapper tools.

I am no expert, I was hoping to see something obvious like a blowout. What I identified to be the problem was a an area on the rear most cylinder. The cylinder itself is discolored and the piston has more carbo. In my unprofessional opinion, the tell was the head gasket. on the front two cylinders the metal part of the gasket that mates with the surface around the cylinder was clean and shiny, the rear most was covered in soot/carbon. I think this is consistent with the symptom as well. The oil and the coolant never mixed and the coolant never seemed to be burning off, or not enough to give me the tell tail sign of white steamy "smoke" from the exhaust. When I would pressure test the coolant system, it would hold 15PSI all day but when I would run the tractor, it would start to bubble up into the overflow tank. At one point the overflow tank was clogged and the pressure has no where to go so It blew the top hose.

On that first drive, it over heated and the top hose started to expand, when I hit it with an IR temp gun, it was showing well 150-160°F at the radiator. Now I know the rad was plugged up from this head gasket BS!

Cleaning the head and block, at this point with the cost involved in recoring the radiator, I think I will drop the head off a at a machine shop and have it magnafluxed and skimmed if it's warped. When I started pulling the head I was looking at at $150 for head bolts and a head gasket. I work at a machine shop so I could easily have one of the machinist block the head up on a surface plate and indicate it for me. Now that several other gaskets, a coolant hose and a $715 radiator repair was added to the mix might as well have the head checked I am well over $1000 into it at this point. I am still rolling the dice on the block, but I suspect that is a relatively low risk.

I picked up a set of bottle brushes from the jungle website like these and plan to spend a very boring evening cleaning all the coolant passages out. What has me on edge about cleaning it up is the sodium silicate the is going to be flung in every direction, if enough of it gets in the block an into the bearings, the motor will be cooked. My plan is to use tape and plugs to block all the passages to the oiled areas of the block as best I can. Once I get as much of this crud out of the engine as possible, I will run several gallons of drain oil through the block, hoping it will grab any sodium silicate that made it past my tape and plugs. Then I will top it off with a fresh filter and Rotella. I might even dump the oil and coolant after 2-3 heat cycles. 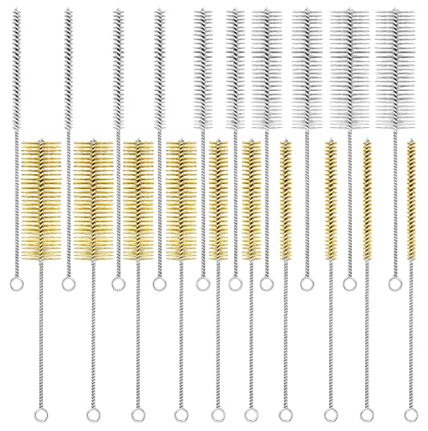 My radiator shop told me that whatever was in there was like cement and the only option was to recore. He said that he tried to boil and ultrasonic it, once he did that it started to spring leaks. I asked him for the core back because I am curious, anyone ever see a core cake up like this? I can tell you it didn't look like that when I dropped it off. There was some buildup but nothing like this! 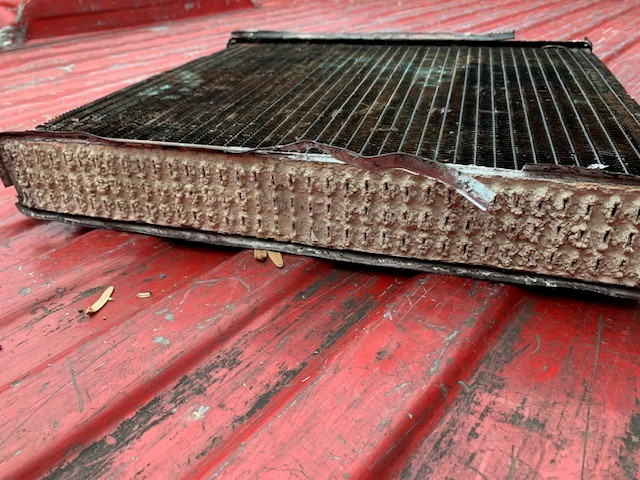