My Foton/europard FT254 snapped in April - and my dealer has proven to be as much use as a chocolate teapot. only for nine months though... they may get better?

They say they are told by the manufacturer (lovol) that the 4wd gearbox casing isn't made any more ... and received a 2WD casing instead.... and sent it to me.

Nope. 4wd transfer hole is missing. I explained this, and was then sent the 2WD transmission case ASSEMBLY.

I know have two anchors, a fast-approaching winter, and no tractor.

The goood news is that the quality of these 2WD casings is amazing compared to the crumbly iron/sand-mix lump that broke.

Their solution is "keep the parts at
No cost, and machine a hole in it?" Obviously there isn't enough material thickness for that...

If you take the free one to a machine shop and tell them what you need you might end up with a working unit again. And probably for less cost and hassle overall. I'd try.
Thursday at 12:31 PM / Desperately trying to find casing for Foton 254 #3
E

Greetings Nick,
It does indeed look like there isn't enough material. However, it also looks like the hole through the case is just cast and not machined. If this is the case then the critical dimensions would just be for any locating dowels. A competent machine shop should be able to determine where these dowels should go from the bad case. Then the new case can be machined and a spacer plate made to make up the missing case thickness. The plate would probably need to be bolted to the new case. Before I retired this is a job I could have done in my shop.
Eric
Thursday at 1:26 PM / Desperately trying to find casing for Foton 254 #4
P

Yup, agreed with the other responses. It is very unusual for the manufacturer to use two different castings for this kind of production. It is understandable that the newer ones might be of higher quality and look nicer.

I would take all 3 to a machine shop and ask if they can make either one of the new ones work. Having the old one to measure from should give them enough information. The new castings may be stronger and better made but they still have to connect to the same parts so the dimensions should be there to allow the milling of the missing face and hole. A competent machinist should be able to quickly determine if the new castings have enough material in them to allow milling of the missing face.

If the thickness isn't there, then it becomes a fabrication attempt at either beefing up the new casting or perhaps making a new one from scratch. That would involve welding up the box then milling and line boring. Not impossible but probably impractical due to costs.

One other thought: Have you looked for salvage yards or "dead" tractors? You may find one for cheap because it has a bad engine or broken axle or something else that would make it a good parts donor.

Best of luck and let us know how it comes out.
Friday at 2:39 AM / Desperately trying to find casing for Foton 254 #5
OP

Thanks for the replies so far fellas!

While I agree that it's *possible* to bore a hole and reverse-engineer the two pin positions and mating surface, (I used to design assembly and machining fixtures for JCB Transmissions in the UK - I'm used to this stuff), I'd rather end up with the right part, instead of one that's been welded and machined. (The casing needs about 5/8" or 17mm of material adding so that the surface can be machined at the right height). As piper184 points out, the entire operation would be more costly than paying for the right part.

In the grey casings, you can see the area of the outline where the hole/surface should be. There's clearly a part of the core that can be swapped out when they're casting the 4wd version.

The detail is good enough to be able to see the shape of the bits of tape that hold the polystyrene core components together, and the injector-marks from the manufacturing of the core.

The older castings had terrible alignment, leading to serious issues. This is where I believe the old casting's crack started. The bolt/screw that had been used in this hole was longer than the threaded portion, and had blown out the thin wall.... and it propagated from there.

Photos of the failure here. 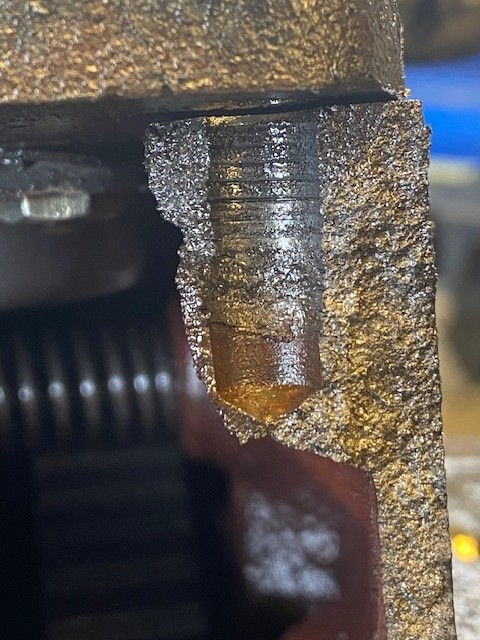 I'm now in touch with the UK dealer, and he seems to know exactly how to handle this. The future is looking bright
Sunday at 7:59 PM / Desperately trying to find casing for Foton 254 #7
D