Looking a a Titian( TN made) flail mower, do you think I should get the 64 or 72 inch flail?

foxbat21 said:
Looking a a Titian( TN made) flail mower, do you think I should get the 64 or 72 inch flail?

dealer thinks I should get the smaller cut, thinks flails eat up a lot of HP.
Click to expand...

I use a very heavy 72" flail mower (Flaco over 1000lbs) on a Kubota 3940 HST about 32 HP at the PTO. When the weeds are very tall and green, it slows down, so must I slow down the speed. The HST makes this so easy to instantly slow down. My only concern about using larger flail mowers especially with the loader off (the way I almost always do it) is the light weight on the front end. Adding weight is great but I can't do that with the given configuration and loader attached. I did have a 6" X 6" X2 ' tube I filled with concrete and welded under the weight rack, adds about 100lbs out front. Another thing is I mow in 2WD 99% of the time. If I strike an object like a old stump that went between the front wheels and I could not feel, I am more likely to spin the tires. That is what I want. The wider the cut the easier it is to bend the flail tube as well. Even the slightest bend will vibrate the heck out of the mower and tractor. Unless you know what you are mowing, it is best to go slow anyway for that reason alone.
May 10, 2021 #4

foxbat,
What size tractor? What will you be mowing and how much?
Slopes or flat? Any rocks?

I'm running an 7'+ flail on my Kioti5510HC: engine 55hp, PTO 43hp (I believe). Manufacturer recommends a minimum tractor of 60hp. I took the risk because my grass isn't nasty thick stuff (though it can get really tall); also, my ground, though pretty flat, is bumpy as heck and no matter what you're doing you're NOT going to be running fast on it[AND, there's a LOT of trees]- I am running in low gear with the flail)- reducing speed reduces the required applied power (you can go out and cut stuff up by hand, but it's going to take a LONG time!).

I'd say that the 6' flail isn't out of the question as far as being in a general spec-range. I'm a big fan of hydraulic side-shift, so if you can get it and you think it would be something of use to you then get a flail with it.
May 18, 2021 #8

No issues with my 3510 (35 engine hp, 29.7 pto) pulling this heavy monster. Hst, I typically mow flat out in medium. Except for drinking more diesel per hour it runs just fine and I love the better cut. I’m mowing thick pasture grass up to 3’ tall to 2” height.

My ground is very up and down similar to bar ditches due to the old drainage profile. When I have a longer run uphill, my forward speed does slow but no big deal.
Aug 4, 2021 #10 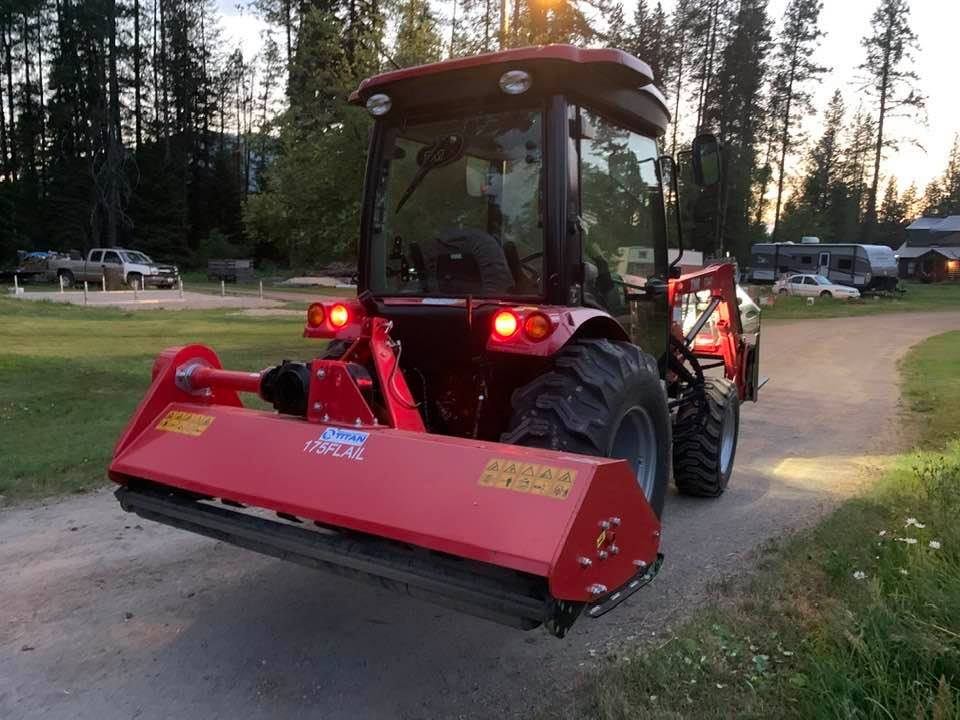 Yes, flail mowers to seem to require a little bit more ooomph........mine is rated as 30-60hp. My tractor only rated at 35.9hp at PTO (48.3Hp) and in extremely thick pasture grass it slowed down a lot. Mine is a Titan 175 (68'').
You must log in or register to reply here.
Share:
Facebook Twitter Reddit Pinterest Tumblr WhatsApp Email Share Link