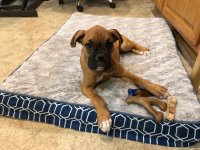 goeduck said:
Donkeys are good guard animals as are Llamas. Both are alert, have good vision and dislike dog like animals.
Click to expand...

I had an awesome combination: Guinea fowl and a dog. The dog, if she didn't spot something first (perhaps she was in the house), would key off the Guineas, which can make an insane amount of noise at the slightest sign of anything that's out of place*. That combination was so effective that we didn't have to do anything as the dog would go and deal with whatever (aerial or ground -based). Miss that dog something awful. Puppy is starting to pick up on this, though we've got to get her to leave our fowl alone (play and prey drive is pretty strong).

* Last Sunday the puppy and I were out and about and the Guineas were making a fair amount of noise. I herded the puppy back toward the our fenced area (fowl are all inside it) and while scanning for coyotes, which are fairly commonly seen outside the fenced area, I saw, for the first time in eight years I've been here, elk! They were hard to make out as I couldn't see their side profile and they were in tight quarters, brush and a big tree close by the fence: couple days later I confirmed my suspicions as I found obvious elk tracks (though about 1/8 mile away from that spot). 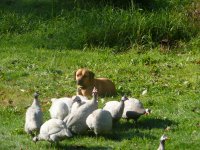 DieselBound said:
I saw, for the first time in eight years I've been here, elk!
Click to expand...

I started having that problem on one of my properties in Clallam County. They have been around for years but only passing through. I have a few young apple trees they ripped the wire deer cage off of and munched to the ground. Fence problems too but the hot wire seems to keep them out of that. Mostly anyway.
Nov 26, 2018 / Dog pics #2,455

Went away in the new caravan last week unsure as to how the dog would take to it, set up at our first site and about 30 seconds later we found him on the bed.......

bunyip said:
Went away in the new caravan last week unsure as to how the dog would take to it, set up at our first site and about 30 seconds later we found him on the bed.......
Click to expand...

two_bit_score said:
Must have been a stressful trip. Looks like he lost all his hair.
Click to expand...

bunyip said:
We had the windows down
Click to expand... 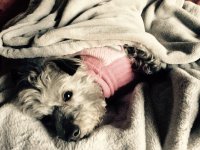