newbury said:
Don't go getting a melanoma!
Click to expand...

Wasn’t planning on it.

But then I don’t think anyone does.

newbury said:
I've found good use for my old white long sleeved shirts I used to have to wear 30 years ago. And the ties can be used for sweatbands!
Click to expand...

rswyan said:
Wasn’t planning on it.

But then I don’t think anyone does.

I've going to a dermatologist religiously since I got my first one.
then the second one where they took a hunk out of my back almost like a deck of cards.
That took a long time to heal, and the scars still itch.

I always have wondered if somehow my adrenal cancer was due to some connection with another melanoma.

so today i sprayed spf50 on my arms and hands while mowing. I get very brown quickly and would prefer not to, though I guess it's the body's
defense mechanism. I'm fair skinned; well I was, now just a mosaic of little weird brown spots and other skin breakdowns. Having to take a lot of steroids for arthritis and then chemo
has really made my skin feel thin somehow. Maybe it is. Right now I feel like I've been to the beach and am moderately burned on the arms. I guess I have to start wearing my long sleeve mowing shirts even more. Maybe I should get another; have two short sleeve but during summer I need long sleeve, as long as it's that cool light material.

some days the UV feels like 11+
that's why I drove back to Doylestown today to get my good hat back. And I gave those first yellow squashes to my friend's wife. She was down at NJ shore with son videotaping boats going in and out some inlet there, for site called Shore Boats. He wants me to go down and take pictures for him. I'm not that bored yet. Plus I have the graveyard picture taking project first. Friend is pretty good with 4k drone. Cost him 250 bucks to get a drone license for his video taping in boca raton florida.
Very cool to have pics of boats going in and out the inlet but from the perspective of a drone camera sitting just offshore. It's becoming more common but still pretty neat to watch.
Particularly in 4k on a big screen. Feels like I'm out there on another boat watching.

might be losing a little bit of my nose soon. Tough way to lose weight. Just ask Buppies.

buckeyefarmer said:
85° but not too bad sitting in shade, when a little breeze stirs up.
Click to expand...

85˚ was the temp at the end of the morning hike, very pleasant indeed. Took the new knee to me (7.5 months) to the farthest hike it has been on - 2 hour, 5 mile hike. Knee did good. We would have been faster but Whipper had to take smell breaks every thousand feet.

But then at the pool I stepped down to the underwater seat and it did not appear to be two feet down only a foot down and I stepped with my good knee down leaving my surgical knee to bend really far and the Egore pain hit me like a hammer and I felt a crick. The pain soon went away and I realize I was just breaking up some scar tissue and it actually felt good after a while just like after when Egore bent it.

No more smoke from the brush fire 5 miles away. This morning it was reported to be 20% contained, but I think it's out now. Yesterday the air water attack had to be delayed because of a drone someone was flying over the fire.

100˚F, time to take Whipper on her evening stroll.

enough folks lubricated by now that the fireworks are going off sporadically. Probably bought too many...

when I was a volunteer fireman here, this was not a favorite holiday. You always were running out of some picnic or cookout because someone
had set the local fields on fire. Or during a dry spell, before they banned it, the steam train running on the holiday would shower sparks down along the tracks and set off a long string
of brush fires. I had to carry a metal water tank on my back, something that was pretty antiquated, and trudge down the tracks with that heavy weight on my back.
And then walk back. We had one field truck then; think they have at least two or three now. But tonight's the night. Actually I worry more about sparklers, lot of kids get burned or hurt
by them when they wave them around too much.

funny short story in supermarket, guy banged into edge of fireworks display and bunch of stuff fell down, which he put all back up.
I joked at him saying glad it didn't go off. He laughed and said he had enough of that, he had just gone in one fireworks store and woman was smoking
just outside front door. He said he just left.

as an old underwriter, I'd be very curious how one gets reasonably priced insurance on a fireworks shack. I cannot imagine a fire that is not a total loss
I bet it would be like a ten percent rate. Ten grand insurance on 100k policy limit. Really is a kind of gambling; would love to see the actuarial results for this class business.
I'm sure much of the little stuff is self insured/no insurance.

RNG has enough to worry about without someone shooting bottle rockets into his shrubs.
Don may you and Whipper keep your cool tonight.
Jul 4, 2022 / Good morning!!!! #152,625

Got 3/4 of the other half of the backyard done. It got too warm in the sun and I got worn out. The last section to do is on the other side of the greenhouse....which somebody put right in the way! 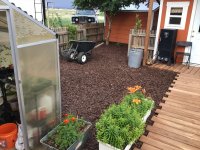 Tomorrow will be the completion for sure!
Next on the agenda is to take the trimmer for a walk. Some of the weeds in the outlying areas are getting bigger than the shrubs! It's on the backside of the sheds, not too much traffic going back there, so somewhat neglected.

There are 2 trees back there and one of the future projects is to make some landscape beds around them.... just to keep the weeds down. No further plantings back there, no point... won't be able to see them.

Sad day up near Chicago, a smaller town having a parade, and some Azzhat went up on a roof and started shooting people. This is getting out of hand. The guy fled and initially got away, but have since caught him. 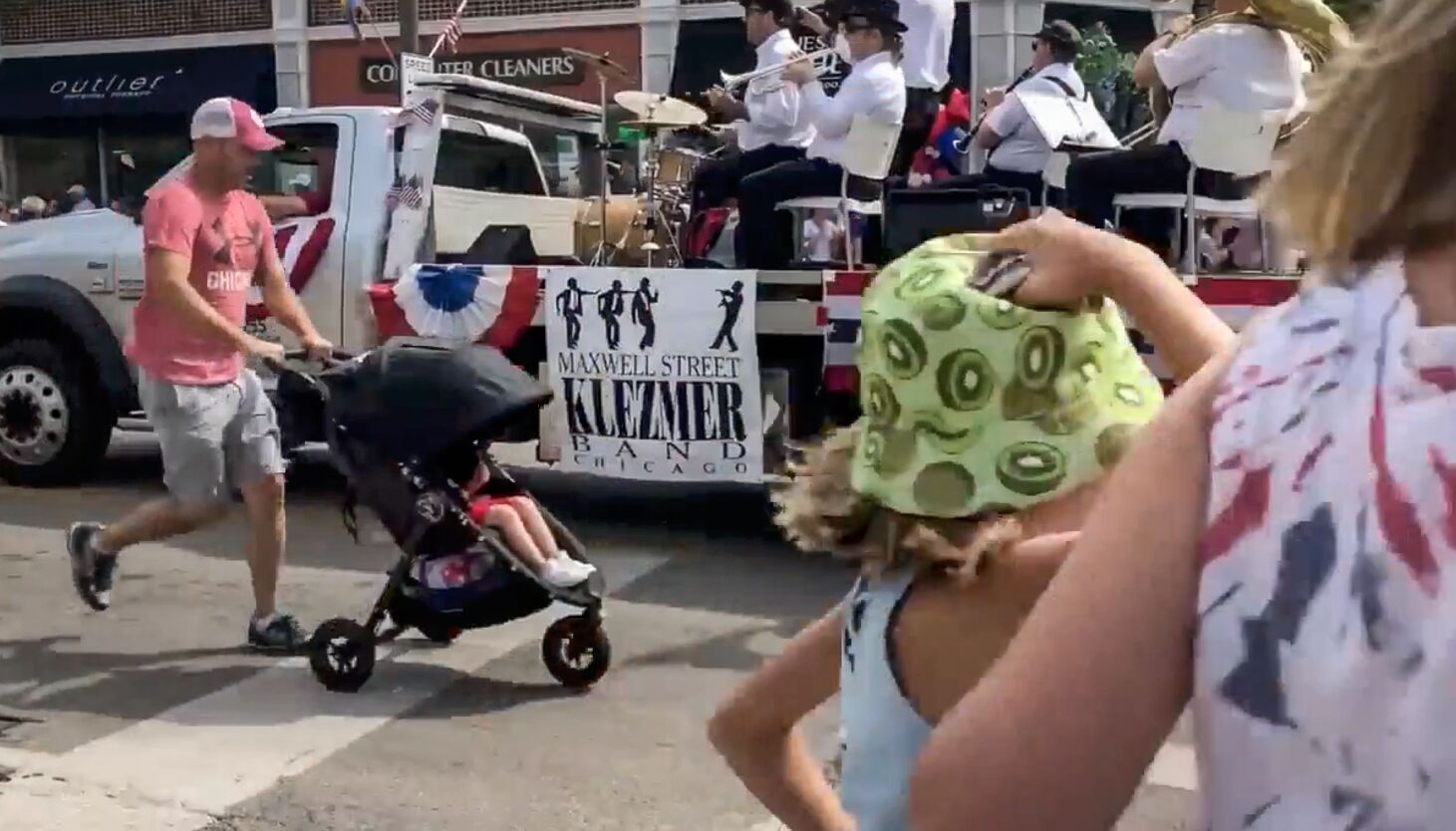 Here’s a look at photos taken by Sun-Times and WBEZ photographers following the Fourth of July mass shooting in Highland Park.

PopG, thanks for the info.... I ran out of fingers when I was counting the hours.

Drew, your brother has a nice find there! Glad you had some fun showing it off!

Don, glad you didn't get hurt.... I guess kind of built in warning system.... Don't forget about me or I'm gonna make you hurt!
Unfortunately, I still can't bend the knee when going up / down steps. I thought my appointment was this week on the 6th.... nope, next week. It won't come soon enough, but I don't think it's going to be an easy 'fix'.

Thomas, I am assuming that you didn't startle Boo when you saw him in the shed! I bet you were though.....

Good late (Tuesday) morning. The overnight low was 0.0C, so no frost, but it still took awhile to warm up enough this AM. Well, we are in Winter down here so it's to be expected. It's partly cloudy, calm and 14.3C currently.

74F and partly cloudy @ 22:15, heading down to a low of 73F overnight. Not much drop there ... lol. Calling for periods of showers late, then thunderstorms in the morning (Hallelujah !!!) giving way to partly cloudy skies later (with a high of 91F) Some storms could be severe.

Got those 8 bags of mulch unloaded and placed around the perimeter of the northwest planting bed.

Then made the run down to Menards. Only picked up the pots and string trimmer spool, as we disagreed what they owe me on the mulch. Need to consult my original paperwork. Also need to place another order for more mulch, probably another 50 bags.

Woman had grilled some Hebrew Nationals and made up some of Her Mac salad (and Lemon Bars !!!) so I ate when I got back and then got cleaned up and we loaded up the car with plants and headed over to relatives to drop those off. Had a good visit with them and got a tour of their property which was pretty impressive. The wife raises over 600 different varieties of day lilies.

Stopped on the way back at a guy's house near us who had banana trees growing in the yard because we wanted to find out more about that. Confirmed that he does not remove them and bring them inside for winter (they were about 6' to 8' tall) ... just piles leaves up over top of them and they come back every year. Did not know you could do that. Need to check into it further and see if maybe it is a particular variety or cultivar that tolerates the cold weather we get up here.

After that we came on home and stopped to talk to a couple of neighbors - one was out working in their yard and the other was walking her dog.

The second reported that there was a black bear spotted down by the reservoir today, which is about a mile from here. Unusual, and something we can probably do without.

On coming down the driveway these two little guys were out in the front yard foraging. Noticed them the other day up by the compost pile. Needless to say, they did not make it home tonight: 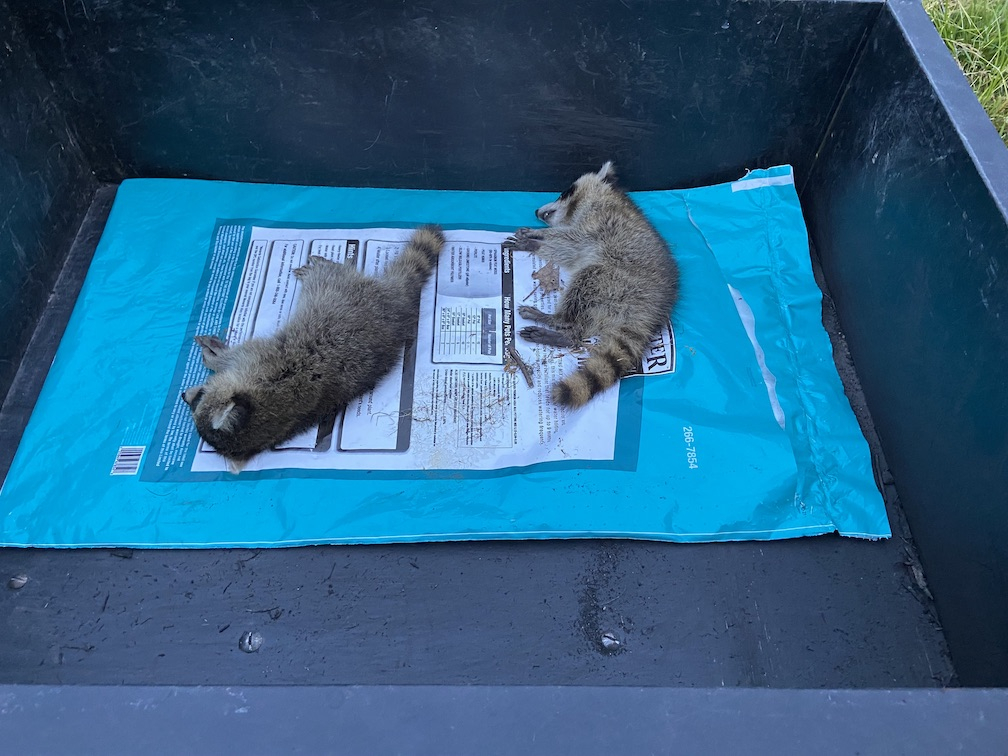 After tossing them on the burn pile (Rocky was no longer there) I came back down to the house and managed to get all the summer squash along the back of the frog pond and in the flower bed watered before it got too dark to see.

That included replanting two squash plants that got pulled up earlier in the day that I somehow missed. Woman moved some stuff into the garage while I was doing that and I finished it up when I came around front.

Somehow missed getting the large tomato plant that I repotted yesterday moved inside last night and it got clipped pretty good. It will survive but will take some time to recover. Suspect it was the deer.

Looking forward to (hopefully) getting some rain soon.

daugen said:
I wonder how many cordless battery charges 3000 screws are? David, are these the screws with the plastic spacers in them?
I got an education on metal roofs in NC but don't remember a lot.