Ground Beams and pouring a new slab next to an existing one.

Bearsixty7 said:
..I contacted our town secretary and he responded he forwarded my the info to the building official. Hopefully he will respond in a day or two.
Click to expand...

This is what the building inspector responded with,

The footing for accessory structure would be 12 inches for exterior beams. If fill has been added then it would be 6" inches into undisturbed soil (depth of fill plus 6").
Minimum width is 6".

So not really a lot to them, I was thinking they may need to be more elaborate and require a lot more rebar and concrete.
May 21, 2021 #12

Here in Tyler, where we have very and stable red clay, the footings are generally a foot deep and a foot wide. Beams are not the same as footings. Footings are where the load of the building rests. Beams tie to footing together so the slab is reinforced. Beams can be limited to just one across the foundation, or a grid pattern.

For what you are doing, I would drill into the slab just as you described and install rebar into the existing concrete. This is more to keep the slab level then stopping it from pulling apart. I wouldn't install wood or anything for expansion. A piece of 30 pound felt paper works if you are really worried, but I never put anything between old and new concrete.

Never use mesh. Install rebar 24 inches on center in a grid, or closer together. I personally like it at 16 inches so I can still walk through it without knocking it off of the chairs, but I get that little extra benefit of more rebar.

Chairs are critical. Never trust anybody that says that they will lift the rebar while they are spreading the concrete. This is the biggest lie out there and the number one reason to not hire them. If they pretend to lift it when they first start spreading the concrete, it's just for pictures. Once they really get going and working hard, they will stop playing that game, and put all of their efforts into spreading and screeding. Any rebar that they pulled up will quickly be pushed back down again when they step on the rebar while working.

Make sure the mix is as dry as possible. More water means more cracking.

I don't believe in cutting concrete. Lots of people here do, but there isn't any benefit to it other then cosmetic. Making the concrete pad weaker where you cut it encourages the cracks to happen where you cut it, but if you keep the mix dry, you wont have to deal with noticeable cracks.

Soil compaction under the slab is important, but it will take a decade to have issues if it's not. All cracks that happen in the first month are from too much water. If you have cracking from the soil not being compacted, it will be when something too heavy for the concrete goes over the concrete and breaks it.

Fiber is a nice gimmick, but it does not replace rebar. I never use it and don't know of anybody that does.

Plastic under the pad is usually a waste of time and money. If your soil is dry and super absorbent, it will suck the moisture out of the bottom of the concrete pad which will result in a weakened pad. If your soil hold water, like the clay does where I live, there is no need for plastic. In summer, soaking the soil with a hose is all that I've ever done, and most new construction doesn't even do that.
May 21, 2021 #13
OP

We are on black clay here.
I am using #4 rebar and 2-1/4" chairs and currently have it planned for 18" grid but the more I research the more I am inclined to go to 20"-24".
I am definitely dowling into the old slab using adhesive and will just direct pour up to it.
I have asked 1 of the readimix companies I got initial quotes from, what additives they have, Water reducer/superplasticizer, fibers, etc. Seems those can really strengthen the slab and make it a lot easy to pour and finish from all the videos I've watched. I just don't know what's available here.
Didn't plan to use plastic since it won't be fully enclosed, more of a lean to carport.
The term groundbeam I think is being used for footer here by the building official since they said if a structure was going on the slab they are required.

I was planning to excavate the area down some and pack in some sand and gravel but I believe when they did my shop, they just dug the groundbeam/footers around the perimeter and then through the center both directions, spread that dirt over the floor area, packed it and poured right over that. Picture below.

It's been 16 years and its had a 10K RV trailer parked in the center bay and no cracks so far.
That kind of matched up with some saying the best base is one that's been undisturbed for years and mother nature has compacted. 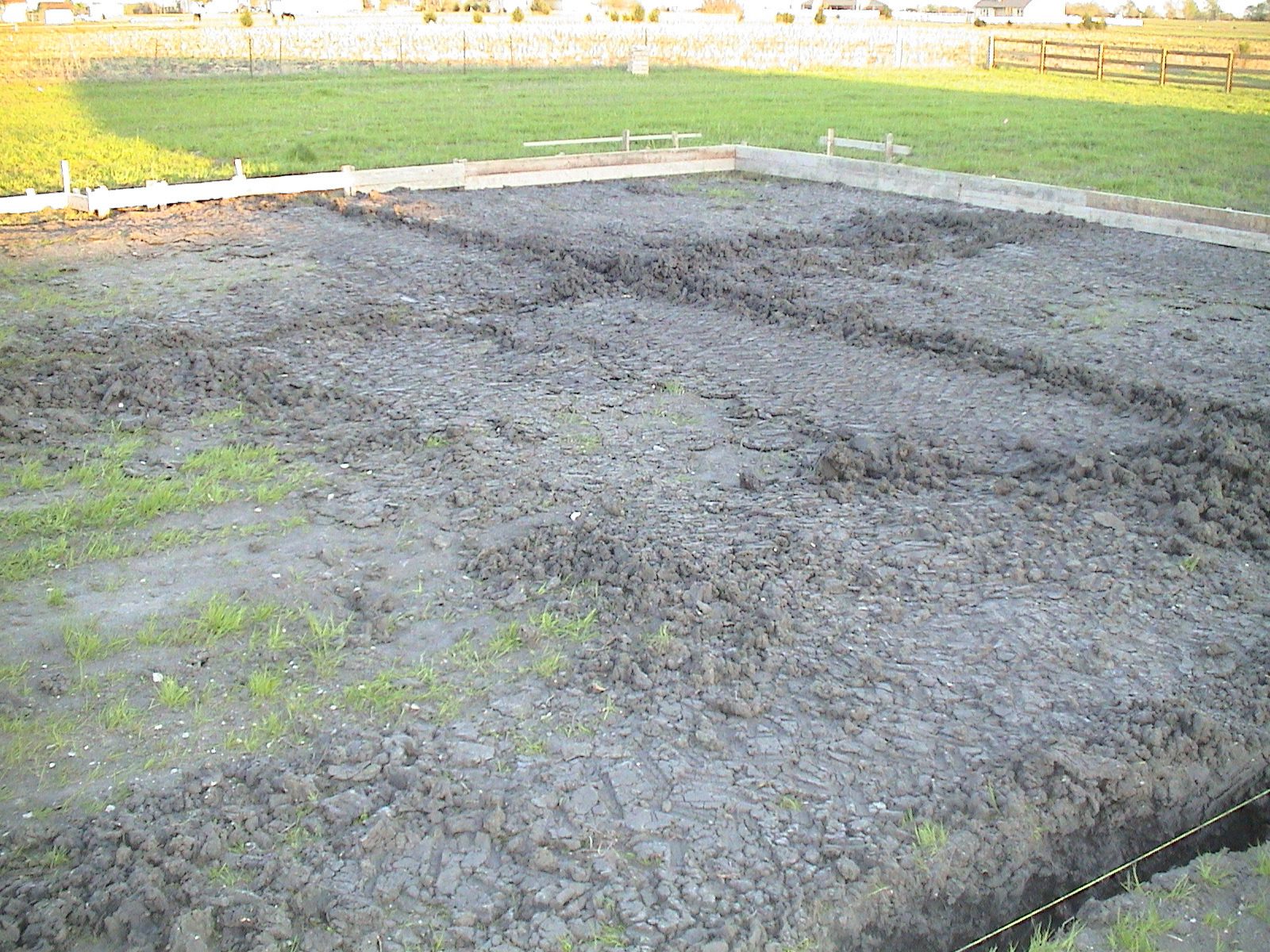 Your chairs are too tall for a 3 1/2 inch thick pad and half inch rebar. The bottom 3rd is where you get the maximum strength from rebar, but of it's dead center in the middle of the pad, it will still work just fine. Higher in the pad is not a good thing.
May 21, 2021 #15
OP

EddieWalker said:
Your chairs are too tall for a 3 1/2 inch thick pad and half inch rebar. The bottom 3rd is where you get the maximum strength from rebar, but of it's dead center in the middle of the pad, it will still work just fine. Higher in the pad is not a good thing.
Click to expand...

I'm pouring 5" slab, I even double checked my first post to make sure I didn't typo (happens more than I care to admit!) so it will be just below center.
4" seems to be the standard for most people and those all seem to crack. I have always poured 5"-6" (last one was a driveway addition and it came to a bit of a point, that I made about 8" thick for about 8 feet, so far so good.
May 21, 2021 #16

I misunderstood the thickness of your pad and assumed you meant 4 inches thick since there is no such thing as a 5 inch board to form a slab and most people just say the thickness of the lumber used to build the forms, even though in reality, it's half an inch less.
May 22, 2021 #18
OP

EddieWalker said:
I misunderstood the thickness of your pad and assumed you meant 4 inches thick since there is no such thing as a 5 inch board to form a slab and most people just say the thickness of the lumber used to build the forms, even though in reality, it's half an inch less.
Click to expand...

EddieWalker said:
I misunderstood the thickness of your pad and assumed you meant 4 inches thick since there is no such thing as a 5 inch board to form a slab and most people just say the thickness of the lumber used to build the forms, even though in reality, it's half an inch less.
Click to expand...

We wanted to add a 24x24 addition to the back of it. So I was just going to do the same 12" x 12" perimeter and 4" slab right up against it and pin into the existing slab.

Due to county building codes, since the TOTAL square footage was going to exceed 700 square feet, it needed footings. Makes little sense, but that's the code. So they wanted us to pour a 12" x 8" footing 48" below grade (the frost line) and a foundation wall on top of that, then the slab.

So I asked the inspector why a pole barn of similar total size didn't need full footing and foundations, but could get away with 12" sonotubes on 8' centers going down below the frost line?

He kinda shrugged his shoulders.

He said sure. Yikes! That saved me a small fortune in excavating and an additional 96' of about 4' x6" wall, forms, etc...

So that's what I did.

Building inspector was very happy after I showed him a picture of the 1st sonotubes and pins. Said just do all the others like that and your good.