How do they make several different HP tractors with all the other specs being the same?

Hay Dude said:
I have the successor to that line of tractors, an MX-270. The 8.3L Cummins (CDC) pulls a 12 ton Hesston large square baler perfectly. I will be running that tractor & baler in about 4 hours
Its got stupid power and a really nice turbo whistle. We dynoed it earlier this year and it made 270HP at the PTO.

New Holland Genesis tractors had a similar iineup. The 70 series utilized the same Ford/New Holland 7.5L diesel from 170-240HP.
Sometimes in other tractor series, the lower powered models of the lineup will not be intercooled Or may not be turbocharged (NA) along with lower fueling from the pump.
Click to expand...

I helped with spring work with an MX285 for the neighbors. I am not a "Case" man but I was sure impressed with that tractor. I did lots of field work at lower rpm's and a couple of gears higher to maintain the same speed. Can those motors pull! What they need for your application is a pto gear so you could slow the engine down if desired.
Jun 17, 2021 #42

MechanicalGuy said:
The mx series that I listed are the same engines. Injectors and all. Tuning is the only difference, that's what his question was, so explained it.
Click to expand...

It requires changes to timing and fuel ratio and boost pressure. That is what this thread is about.
Jun 18, 2021 #45

Probably the decals and the brochure printing……

Most people buying tractors don’t know this, but if you bought 10 of the exact same tractors, they would have different dyno readings.
When I was shopping for a square baler tractor, I was looking primarily at Tractor Data and Nebraska testing.
It was interesting to see what THEIR tests were compared to manufacturers claims.
For example, below look at the testing for my MX-270. Case-IH claims it makes 235 PTO HP. However, in the actual Tractor Data testing, it actually made 271 PTO HP. That’s a HUGE difference in my favor 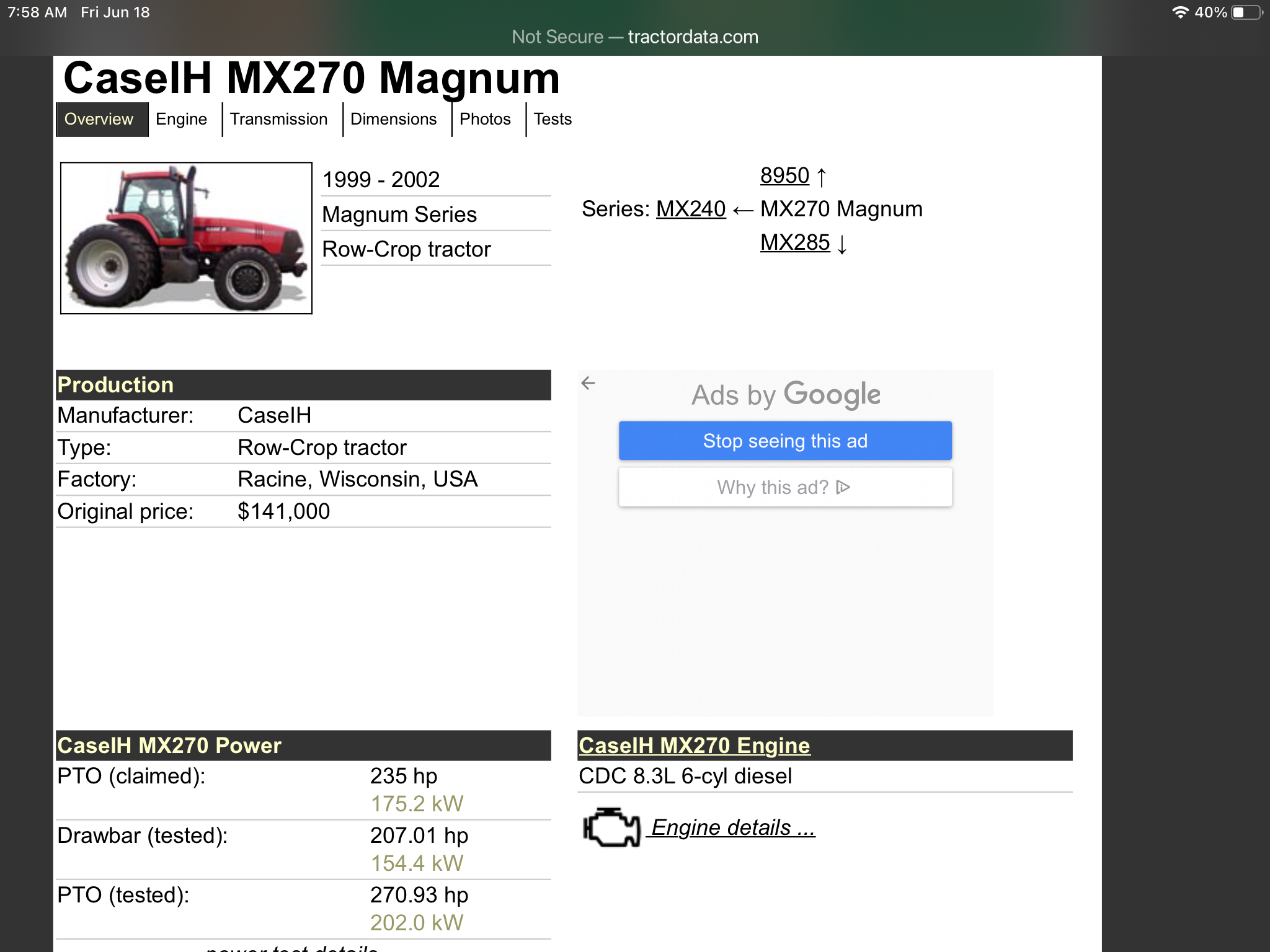 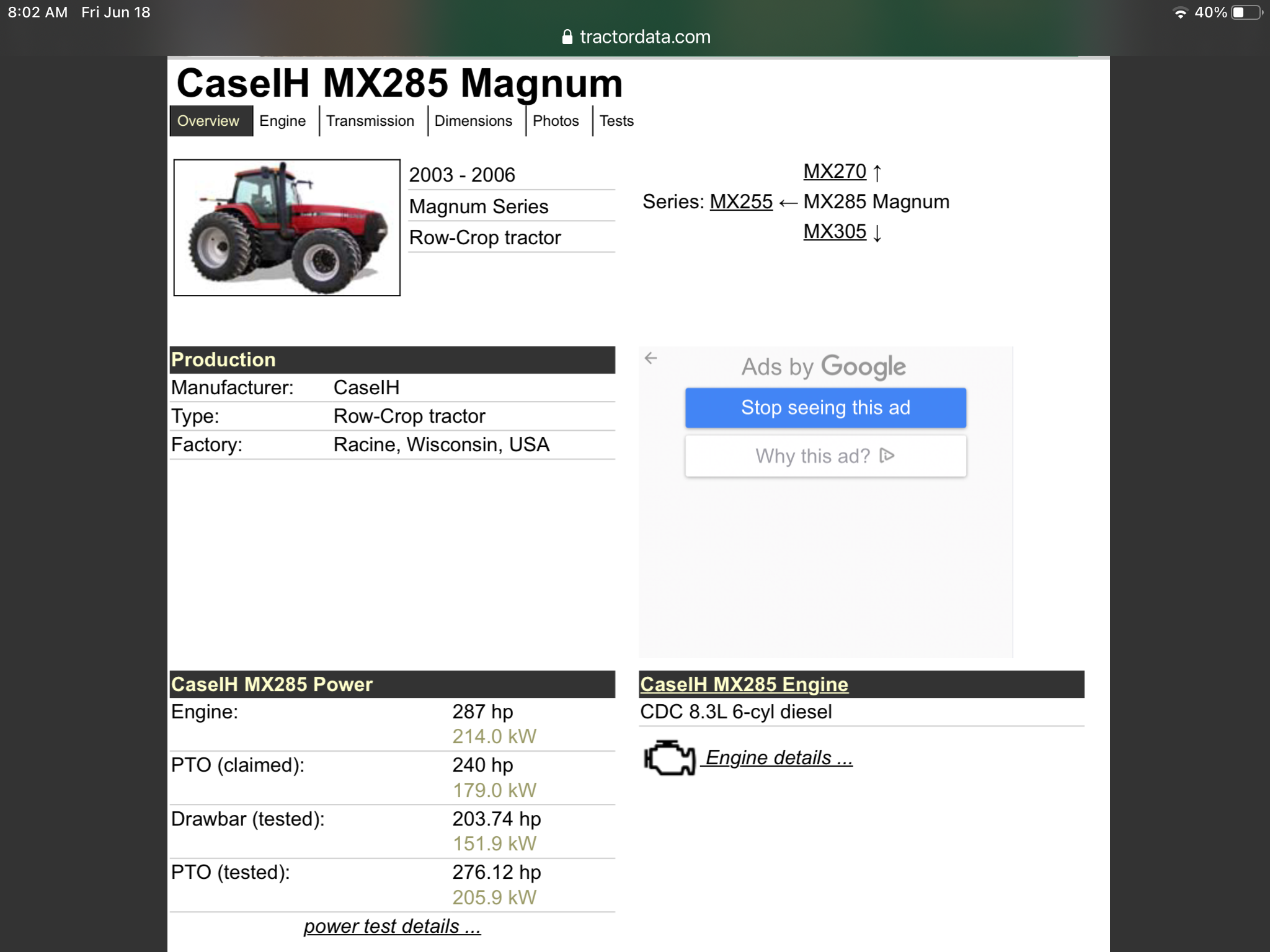 The take away from all this is that this particular lineup of Case-IH tractors is wildly more powerful than claimed.

BUYERS: Ignore the brochure and look at independent testing.
Or better yet, have the dealer dyno test your tractor before buying it. You might be surprised.
Last edited: Jun 18, 2021
Jun 18, 2021 #47

MechanicalGuy said:
It requires changes to timing and fuel ratio and boost pressure. That is what this thread is about.
Click to expand...

In my original question I meant that, if you look at the sales literature or data sheet, there are many numbers to describe engine, frame, hydraulics, PTO, transmission, and on and on, arranged in a neat table. And if you look across models, every single number is exactly the same, except for the horsepower. They report weight to the pound, for example. If the higher horsepower tractor had an added turbocharger, there would have been more pounds. Unless of course the numbers are wrong, in which case there's no way to compare specs.

The idea that a higher horsepower model would consume more fuel is something I didn't think about, and it's an excellent point! Except that if the 40, 50, and 60 horsepower models all consumed the same fuel when actually delivering 25 horsepower, then it doesn't matter. I don't know if this is the case.
Jun 18, 2021 #49

If you want to know how 40, 50, or 60 hp engines compare when delivering 25 hp, then I think you will do better looking at the graphs of torque vs RPM.
Those graphs are usually in the operators or basic service manual for each tractor. Sometimes you see them in the adv. literature but not dependably.

All engines make more HP at higher RPM simply because HP is just Torque multiplied by RPM. Many mechanical types find that looking at torque vs RPM is easier to interpret than looking at HP vs RPM.

Back to the graph of torque, the wider the range of RPM that an engine can make high torque means that motor is a better choice for being run at less than full HP.