I've asked this on another forum I visit daily.... but since this forum is the first one I ever joined, I figured I'd bring the question here.

1. I inherited a cannon.....yes, a cannon. It's been in the family for probably 50 years, possibly more.
2. As a kid, we'd fire it with rags stuffed down muzzle. Since then, Dad has acquired 10 cannon balls
3. Dad (92) hasn't fired this in years/decades. Somewhere along that path, someone put a ball down muzzle and forgot about it.
4. Today, ball is stuck with dirt, possibly corrosion? Used to be airtight BUT I'd been spraying it with PB Blaster and forcing air into ignition hole (no breech to access behind ball, muzzle load only)


I'm looking for ideas. I want to preserve the ball that's in there if possible so drilling into it is my last resort. Right now, the ball DID free up but as I was working it, it rolled deeper in and is again stuck. This time, it's NOT airtight so when I pressurize the air behind it, the air simply escapes instead of actually budging the ball.

I had an idea (picture below) but glue a "cap" onto it and then have the cap to grab onto and wiggle/pull.

One question I have is, will something like superglue stick to (what I'm told is likely to be) a lead ball?

Then... if yes, what would you make the "cap" from? I have other balls to form it with.

Barrel has pointed in various directions, including down. Ball isn't moving. I've tapped on sides but don't want to hit too hard and dent/mar the outside of barrel. You can see the crud that was in there. Most of that is cleaned out now (at least on the exterior side). 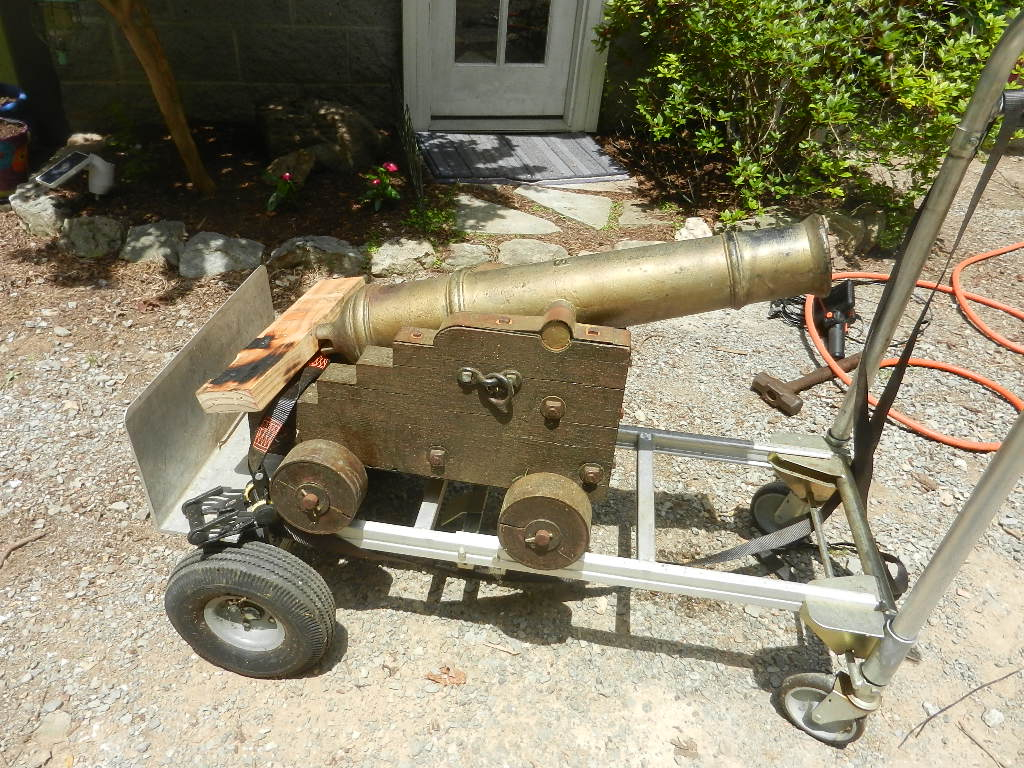 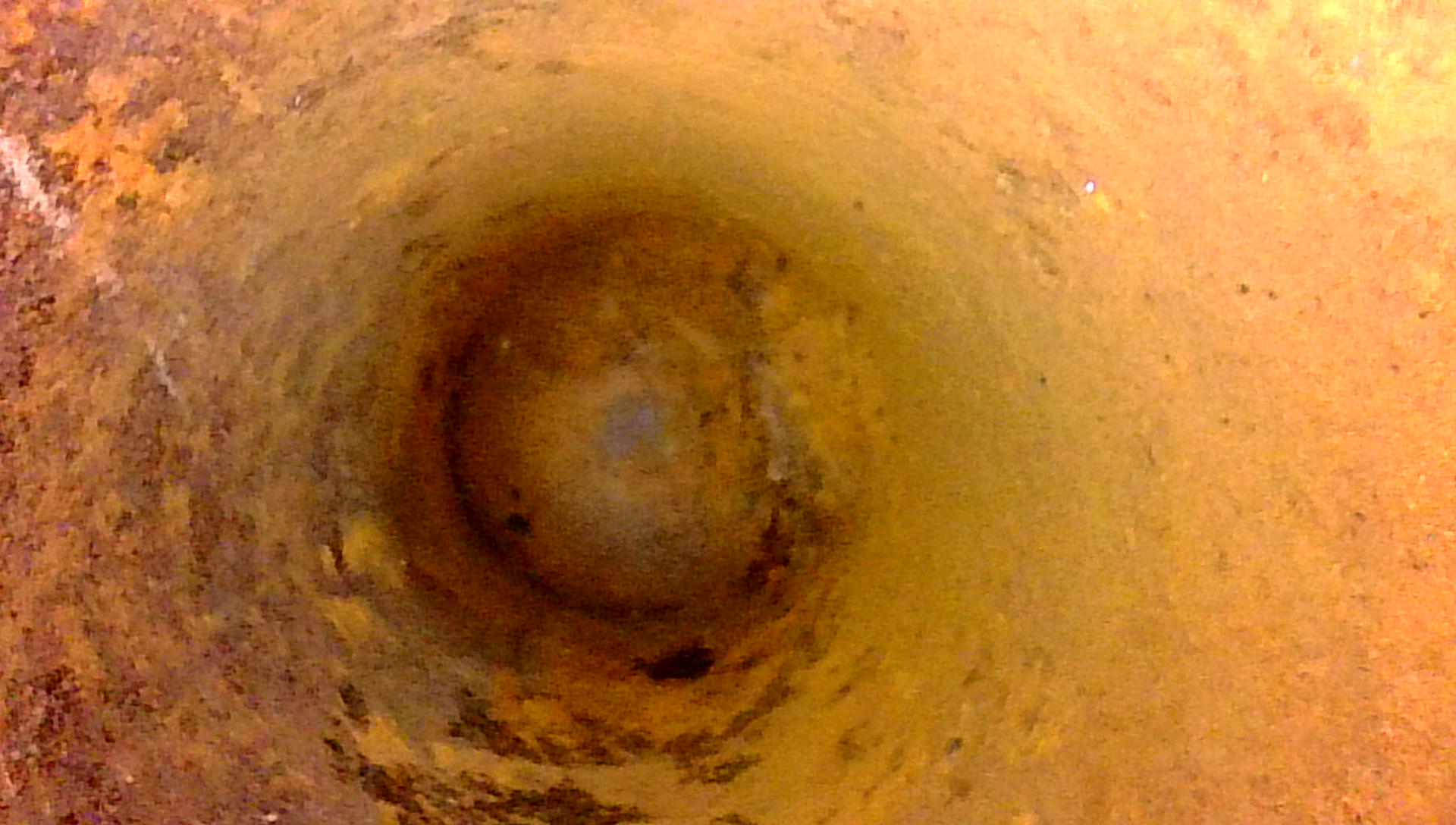 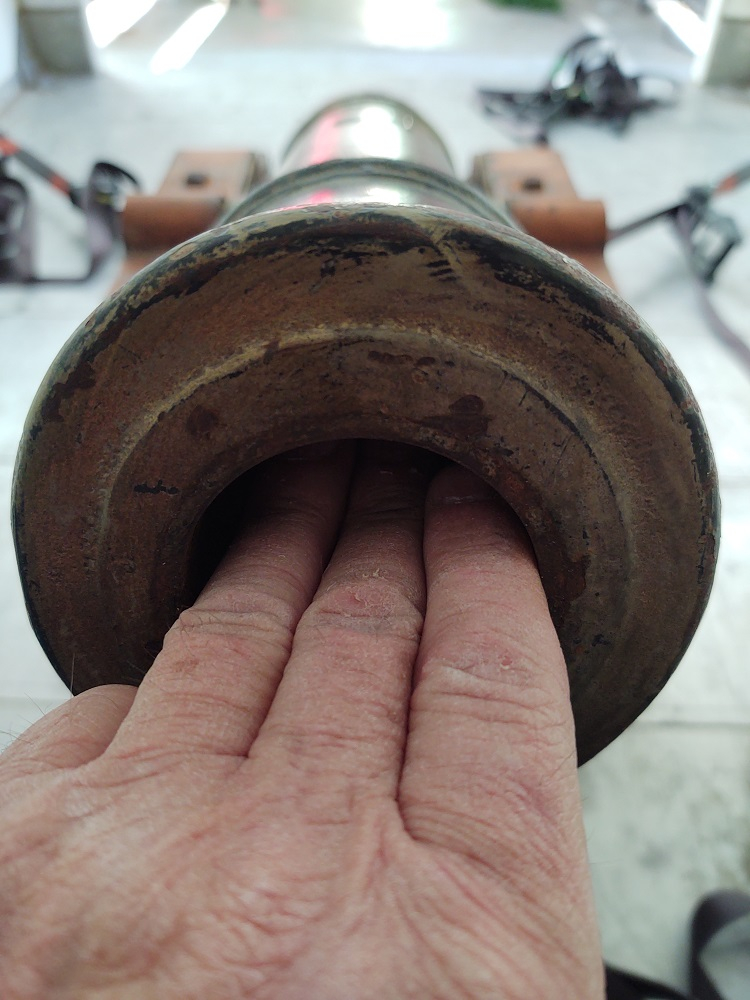 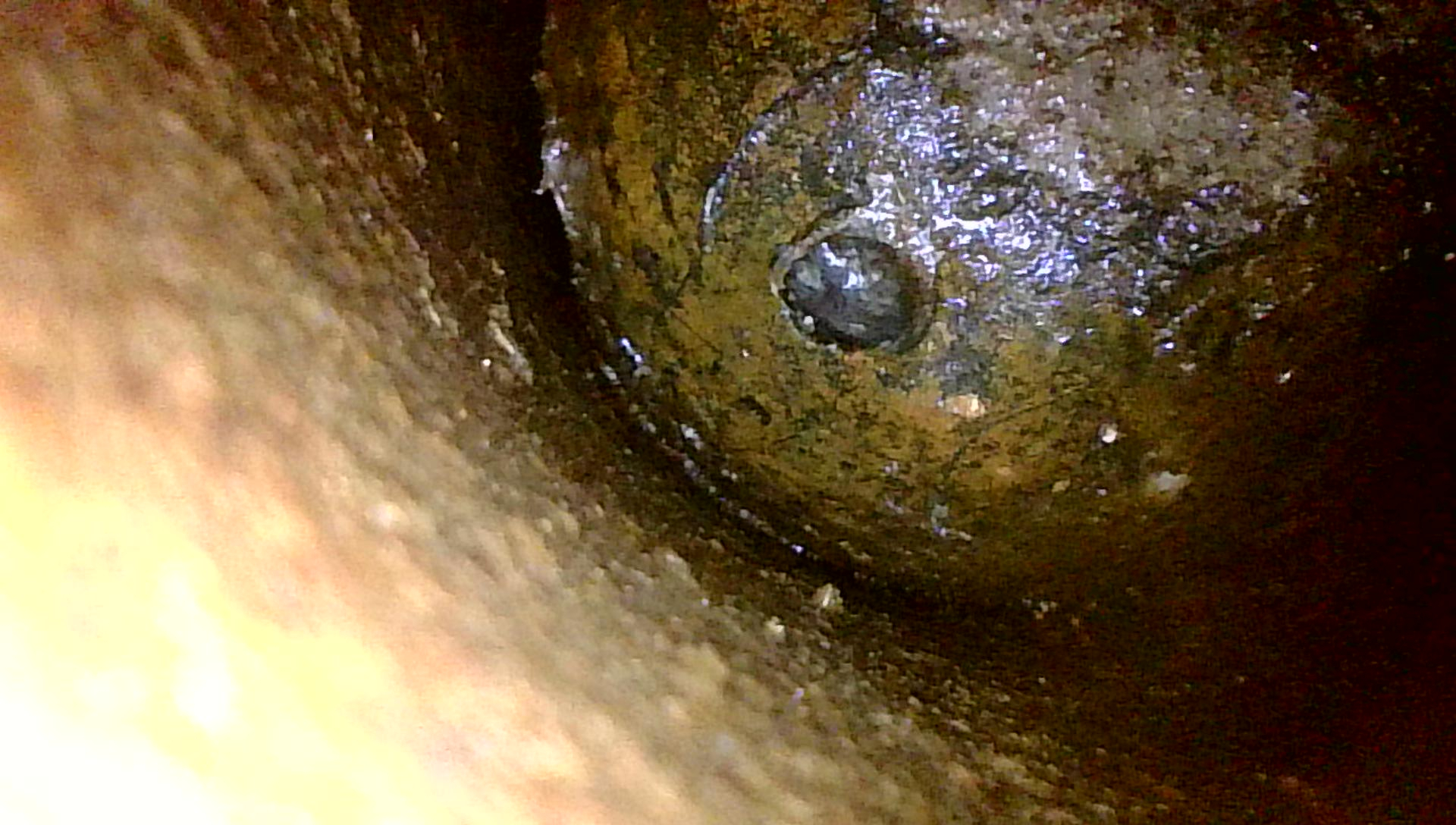 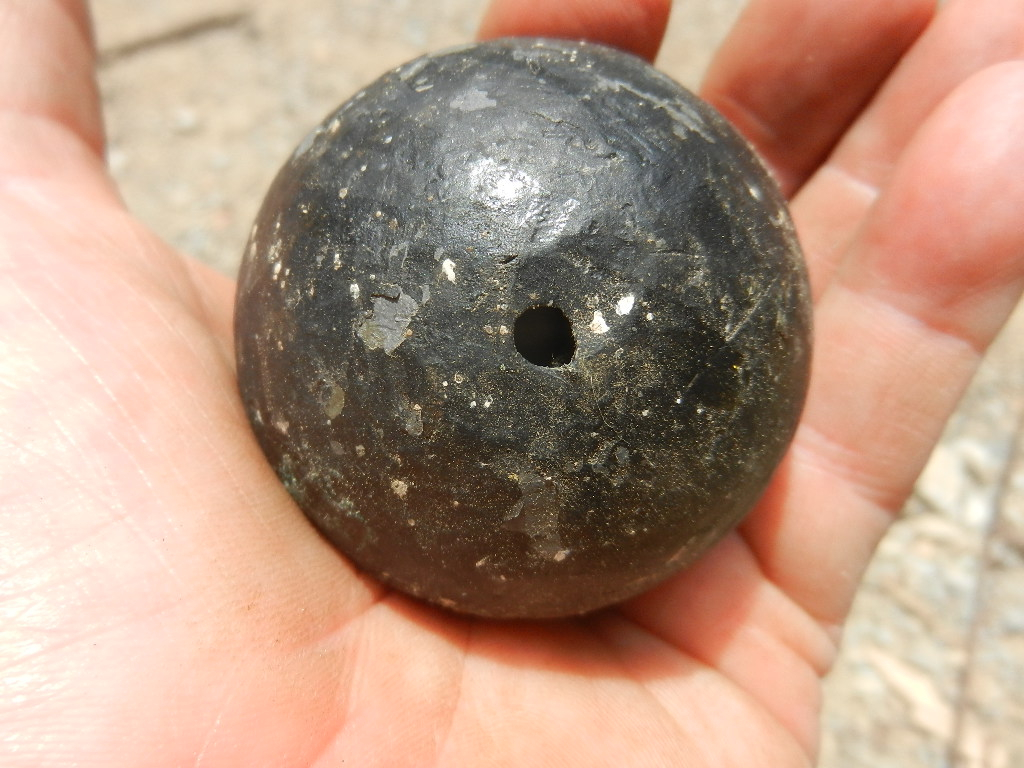 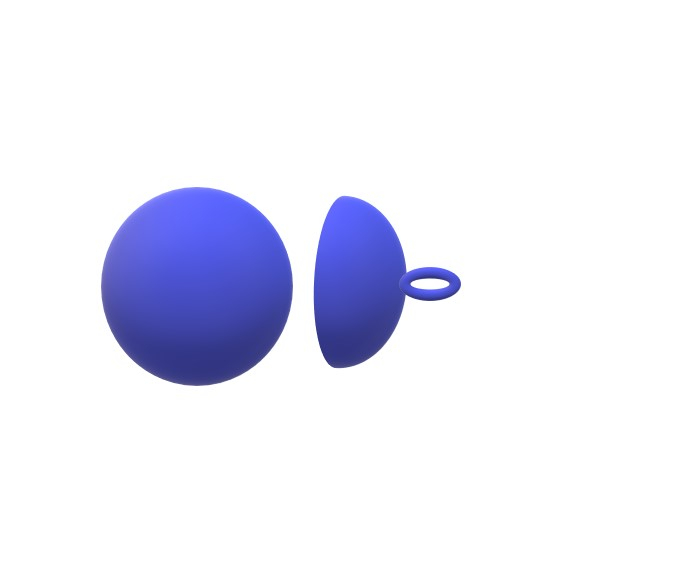 very cool cannon. You could have a machine shop get it out or DIY

Drill a hole in the ball, looks like a 24 to 30 inch drill bit would do it. To drill the center, you could cut a 12 inch long 4 x 4 to a square that just fits in side. Drill hole down the center. Or just use a flash light try to get close to center
Tap a 3/16 thread, i have used a socket to engage a tap, just use several socket extensions. Tap slowly so as to not break your tap Use all thread and a plate like a gear puller.

Make sure barrel is cleaned of debris, sanded and lubed. after the ball is out, You could have the hole in the ball filled with weld and grind down.

Sounds like it's been there many years take your time getting it out.
Jun 15, 2022 / Ideas for cannon ball extraction? #3
J

Maybe a lag bolt on the end of a rod, screw it into the lead ball and pull.

Any chance there is a powder charge under that cannon ball? If so, proceed with extreme caution.
Jun 15, 2022 / Ideas for cannon ball extraction? #4
R

If you want to pull it out, you're gonna have to clean the PB blast off the ball. Lacquer thinner will cut it. Then use a stick whittled out for somewhat the curve of the ball. Use NP1 tube caulk and put a glob on there and let it sit 24 hr or more. Forced air into barrel will help it cure. That caulk will stick to glass, so it will stick to the ball. Glass is hard to adhere to, so if it passes the glass test, you're good to go. Also a caulk called SIKAFLEX is available at Home Depot, close to the same caulk. If it smells like chocolate cake mix, you have the right stuff.

Mating surfaces must be clean, not kinda sorta clean, that won't get it. So it's closed breech. I'd make sure ain't no powder in there. But, you have ball movement because there is no wadding, or patch. That cannon ball goes off, I imagine it will make a non repairable hole in you. So be careful.
Jun 15, 2022 / Ideas for cannon ball extraction? #5

Gravity is your friend. If you have the equipment. sling it upside down and tap on it. I would at least try that. Come-Alongs are inexpensive but will get the job done. Even better if you have a loader or other lifting equipment. Like others have said. Sounds like a hold my beer Kodak moment.
Jun 15, 2022 / Ideas for cannon ball extraction? #6
OP

I've got a loader so I've got the means of hoisting it.... I just don't know how much I like the idea of removing it, out of fear of damaging the threads where the bolts hold the straps on. (might be an unfounded concern)

I can't swear that it's loaded or not.... Can't see on other side of ball to be 100%. That said, Dad kept this in his office for decades AND if it WAS to be loaded, whatever is on that side of the ball, below the ignition hole, is totally soaked with PB Blaster as I've been working it into both sides. When it WOULD hold air pressure (when the ball was totally stuck AND sealed) the pressure built up, I unwittingly pulled the rubber air tip away from the ignition hole and the pressurized air unloaded on me blowing out some chaff with the air. Since my hand was so close, the bits that blew out stung me a bit on the hand.

I've got a hone....alas....too small and too short. So I've been keep an eye out for what I might call a "chimney sweep" to put down barrel and work it around. I DID stick the Shop-Vac down so most of the loose stuff is out but it's still a coarse surface.

One idea was to spray some (small amount) ether down the ignition hole and try to use that to dislodge the ball. Not necessarily to LAUNCH the ball, but get it wiggling around again in there so I can maybe roll/shop-vac it out.

I only have weekends (when I'm not doing stuff around the house) to deal with this so it's slow going.

I WILL at one point, have the ball out, one way or another. Don't know how/when. I've found some local gunsmiths who stock black powder & fuses for (I think they call it) ceremonial firearms. Even told me I can manufacture the black powder myself. My answer is, I did poorly in chemistry class.... so I'm not too keen on that idea. I'd rather pay a few bucks and get a can that works & use it up.
Jun 15, 2022 / Ideas for cannon ball extraction? #7

I agree. Gravity is your friend as is vibration.
I would spray the heck out of it, flip it on the nose, tie it to the tractor and go for a drive. Find every bump and then retrace your steps. If you can think of something better to tap it or shake it, great- the tractor was the best I could think of.

(I don't know this is helpful at all, I just wanted to follow this truly interesting problem

Another idea to loosen it up is to soak it down with strong apple cider vinegar. I had an old rusty pair of pliers. Soaked in vinegar for a week and all of the rust disappeared. Not sure if it will work with the PB Blaster though.
Jun 15, 2022 / Ideas for cannon ball extraction? #9
J

Can't add to the above good suggestions except that any time spent cleaning the bore is going to have to be done before you shoot it anyway so you may as well do it first. Then you just have to finesse the ball into the clean section rather than fighting it all the way out.

Maybe measure the spare balls and cobble up something of that diameter to act as a face cutter or face abrader. Twist it in with an improvised T-handle. Extra points for making the face concave to get in closer.
Jun 15, 2022 / Ideas for cannon ball extraction? #10
A

Pour some 80 weight gear oil down the barrel and let it soak past the ball. The oil will help seal between the ball and barrel. Then use air again but be careful that ball may come out in a hurry even with only a few psi of air.
You must log in or register to reply here.
Share:
Facebook Twitter Reddit Pinterest Tumblr WhatsApp Email Share Link