Inverted snowblower on my TYM T474

This snowblower is a Canadian manufacture (Makes the best inverted besides Scandinavian manufacturers). The wonderful thing about them is, they are fast and effective. Posted this in the snowsection too......but not everybody goes there either.

Same rear pull blower behind a 40hp New Holland. Prior to that I had a M K Martin Meteor rear (push) 3pt snowblower. That worked excellent, but the rear pull works excellenter!

I got a good price (including freight) from Iowa Farm Equipment

Here are some manufacturers of rear pull snowblowers

Location
UP of Michigan

Pretty much the same setup except mine is the SB75. Now I just need some real snow. 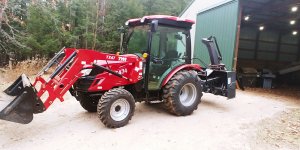 TJL442 said:
Pretty much the same setup except mine is the SB75. Now I just need some real snow.