Is this oak dying?

If it's just the leaves turning brown I'd give it a year or two (but still watch look for other signs of disease/decay) ( BTW I'm assuming the concern is with larger tree in the first picture ...if it's the smaller leafless tree nearer the camera, then that one should probably just go - either cut down or moved - as it's probably too close to the larger tree and will likely compete/weaken both trees).

Not sure about your area, but it's not unusual for me to start seeing some of my pin oaks start changing to a brown color in late August around here, but then the next spring they come back healthy and full of leaves. Figure that with as dry as August tends to be and with the changing position of the sun & length of day the tree is just optimizing/self pruning the leaves/branches that aren't worth maintaining at that time.

Had to take one out a couple years ago because it was dying (top was covered in mushrooms as well as moss), but that one was likely dying due to it being overshadowed by two larger oaks to the south of it (as well as lightning striking the flag pole/tree next to it a few year prior) ..... have another I'll probably need to do next year for the same reason of being consistently overshadowed by larger oaks.

Really hard to tell much without seeing the leaves & bark up close (or knowing what type of oak tree it is) .... though it's probably worth getting the opinion of a local arborist/biologist if for no other reason than peace of mind.
Sep 13, 2021 #12
F

Fuddy1952 said:
Lots of oaks here, some are very old and all doing well with green leaves. In first picture you see the one. I noticed leaves turning brown shriveling up and falling.
It's not that old, I've been here forty years and that's about how old it is.
I assume it's dying but can't figure out why?View attachment 713184View attachment 713185View attachment 713186
Click to expand...

Retired arborist here.
1) many different dieases throughout the country. Most are localized.
2) Forgive me but I'm not seeing a dieing tree in these picture, though I do see some deadlimbs. Are you talking about the small tree in front?
3) It is in a "nice" lawn, have you used 2-4-D, commonly found in herbicides? There are many herbicides that are harmful in the drip line.
4) Do not put mulch at the trunk. Causes disease.Can be good away from the trunk. Most hardwood mulch comes from dead trees - removed, chipped and sold. Sometimes this mulch carries disease.
5) Oak trees are very adaptable. They adapt best to natural changes that happen over a period of time. They do not respond well to the rapid changes we make with irrigation, chemicals, burning, trenching, you get the picture.
6) You had forester and Davey tree out there. If they did not say the tree is dead, leave it alone. I can't diagnose from 1000 miles away and I doubt anyone else can either. 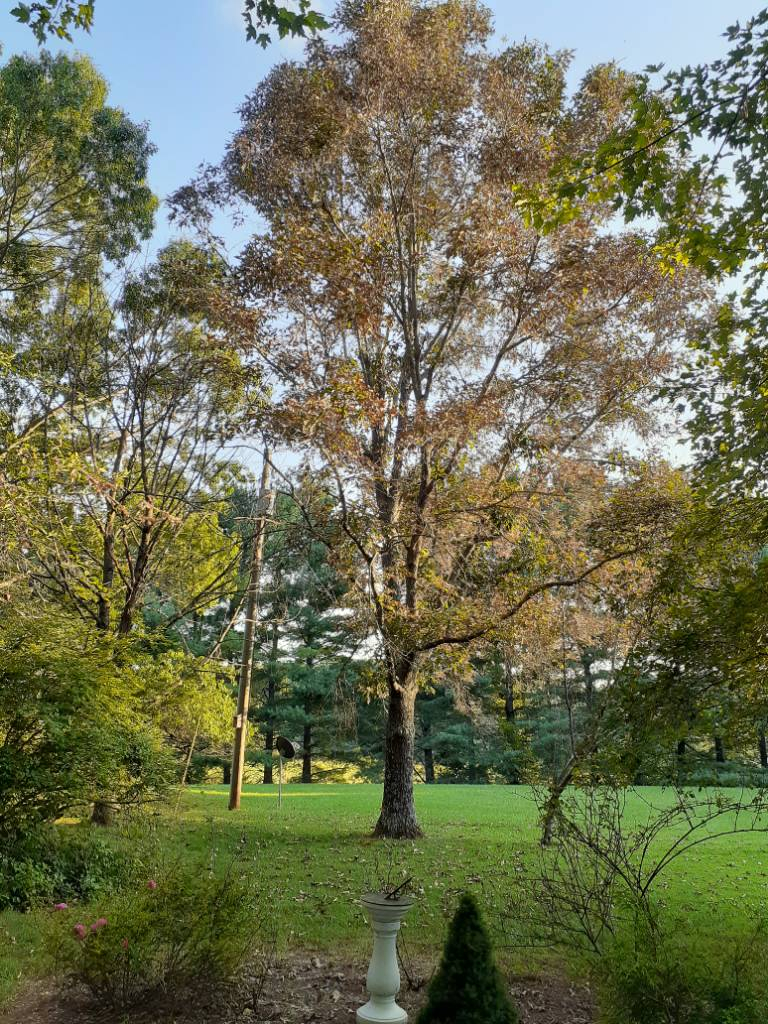 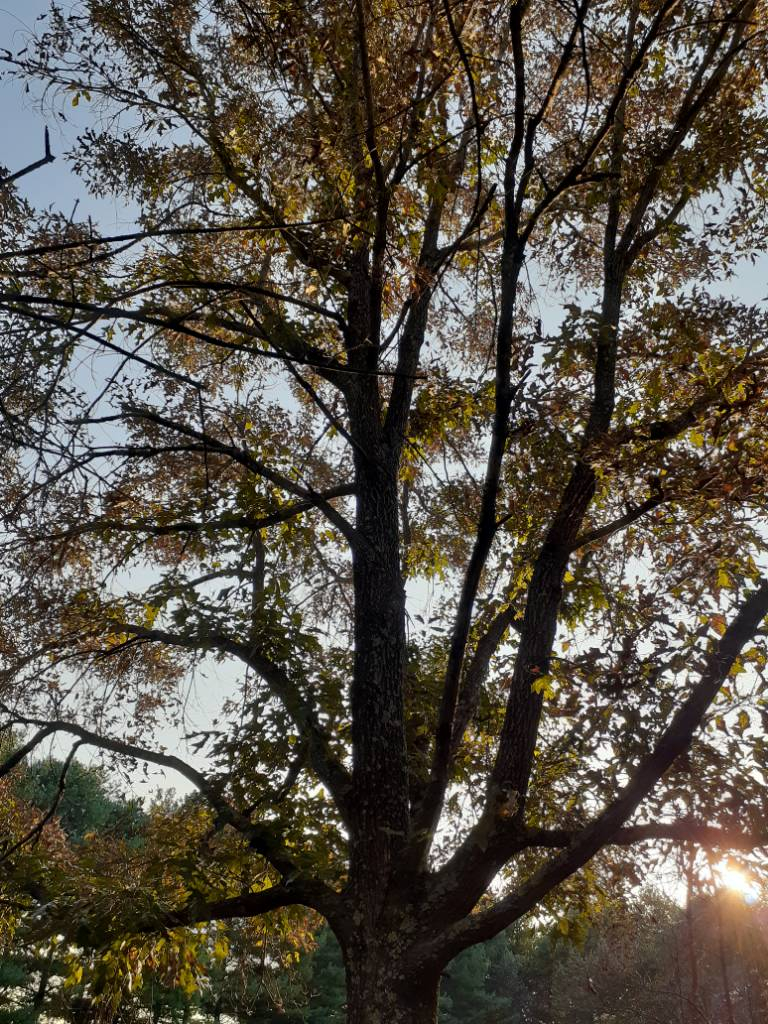 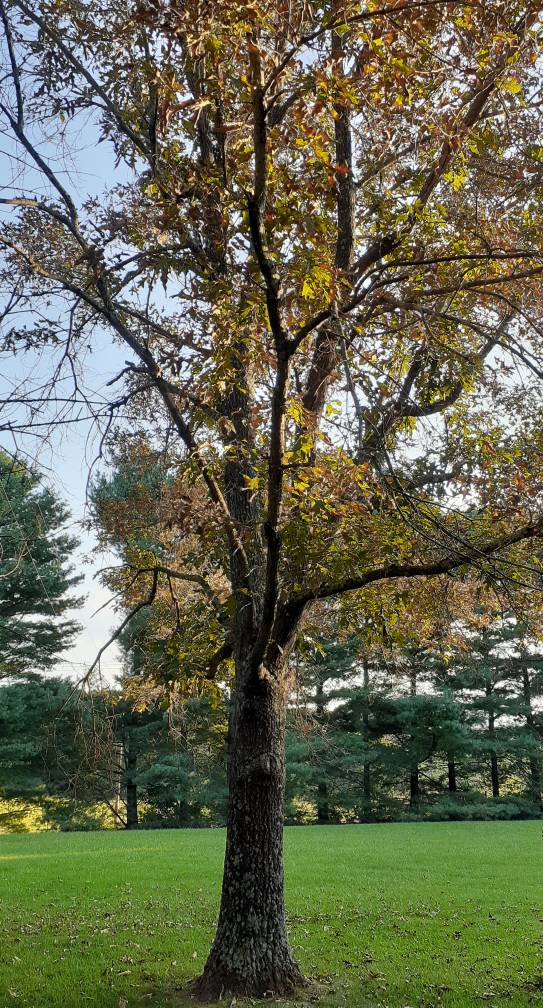 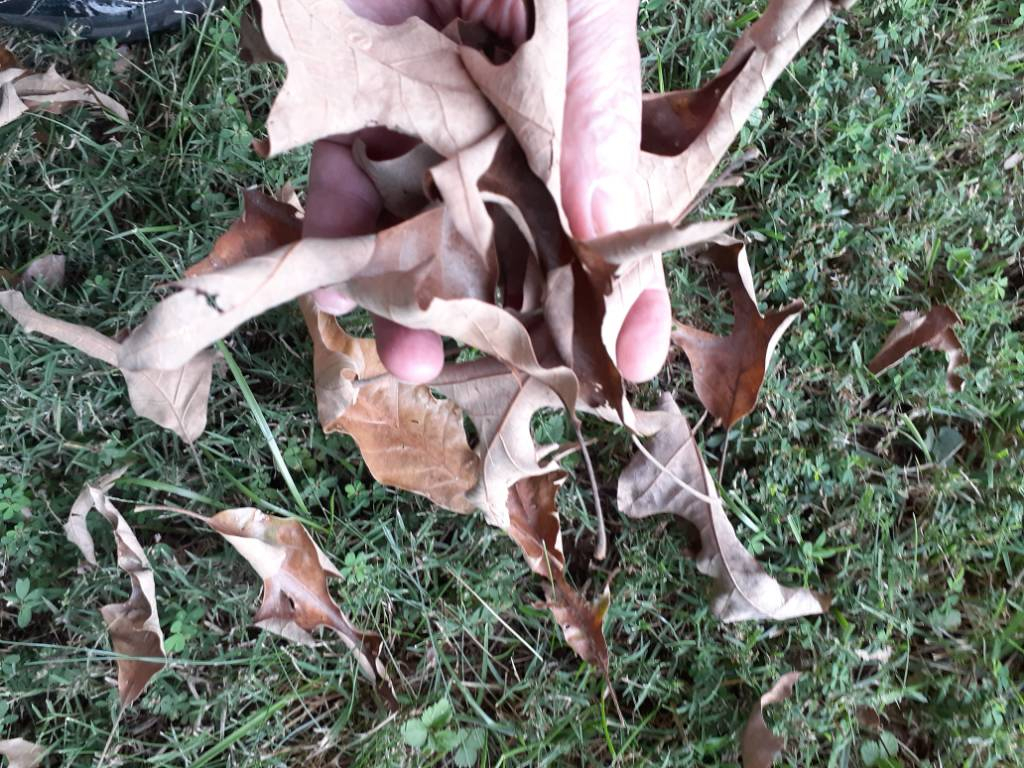 Looks like you've got a variety of white oak with those lobed leaves ...and given those leaves look to be primarily intact/whole and not discolored (with whites, dark browns, or other non-typical leaf transition colors) that'd seem to rule out most common oak tree diseases listed here:

Common Oak Tree Diseases. Oak (Quercus) is a versatile plant that provides shade, acts as a windbreak and produces acorns, which, in turn, feed wildlife. This large genus consists of evergreen and deciduous trees and shrubs. Depending on the species, the trees grow in U.S. Department of...

Also means that since it's a species of white oak if it were to acquire oak wilt - (which it doesn't seem is something that easily acquired - from Oak Wilt 101 — MichiganOakWilt.org: "Oak wilt (Bretziella fagacearum) gains admission to oak trees via root grafts or through wounds. In other words, the oak wilt (OW) fungus cannot actively penetrate and infect trees as many other fungal pathogens or pests can. After gaining access to trees via wounds or through root grafts from nearby diseased trees, the OW fungus infects and then inhabits the vascular tissues where it basically colonizes the entire vascular system of the tree. Within weeks after infection, trees in the red oak family usually exhibit symptoms of leaf loss and death, previously discussed." -- emphasis added)

- that it wouldn't be dead in a matter of weeks. Though it also doesn't seem like it matches oak wilt (from the leaves at least), so unless there are open wounds, cracked bark or the pressure pads associated with oak wilt (examples can be seen by searching "oak wilt pressure pads") ..it's probably not that either.

So given it's already September and I'm neither an arborist nor local to your area (so don't know what the weather has been like for the last few months) .... I think I'd still chalk it up to the tree just going through it's normal cycle of dropping leaves for the winter (perhaps a tad earlier than others if the immediate/local conditions put some sort of slow/long stress/competition on it).

Though if it's a significant concern getting a local arborist to look at it may be worthwhile as they'd be far more informed on conditions and diseases in the local area (and able to see any other considerations that could be at play).

I don't know if it's dying or just sick. Where I live, the do this sometimes and then the next year, they look fantastic. Other times, it just gets worse and then there are no more leaves and it has to come down. I take a wait and see approach. No reason to rush into anything until you are sure it's dead. Even then, you have a few years to safely take it down before it starts to rot and become dangerous.

I've also noticed that when something happens to a tree, it takes 2 years to see that it's hurt. Usually it's from digging in the ground and damaging the roots. I also think that when I've compacted the roots around an older oak by driving too close to it, too many times, has harmed them.

One of the oddest things that I've noticed about oak trees in the city is that they where planted when the house was built. They where watered their entire lives with the lawn and they have extremely shallow root systems. When we have a lot of rain, and the ground is really saturated, they just fall over. These are massive trees that destroy houses and cars when they fall over. I saw it happen once on a perfectly clear day without any wind. I was talking to the neighbor of a house I was working on. We where on the sidewalk and the oak tree across the street just fell over. It barely made a sound. It landed perfectly in the yard without damaging anything. It's trunk was well over 3 feet thick. Trees that grow up in yards and never deal with drought or dry periods do not grow deep roots. They might also be more easily damaged from mowing, but I've never seen anything to suggest a lawn mower would do this, but a heavy tractor would for sure.
Sep 15, 2021 #16
C

Similar happens to Oaks in this part of the country. Longish period without rain and some of the trees start to shed a some leaves.
Sep 15, 2021 #17
OP

Good news is I got a call back from the Virginia forestry department, I left a message yesterday. Within a few days a fellow who works our district will stop by.
While he's here I'll get his advice on other trees as well as I want to plant Christmas trees and variety of others.
I'm a tree-aholic I guess.