Wow, This thread has me thinking of all the stuff I've build over the last 13 years. Remember the kids grow fast! I started with a free playset off of Craigslist. They are VERY common around me. I actually got 2 of them. They kids they got a playhouse that has a bumpout over the porch where they sleep. They still love swinging in their teens and we got into parkour and ninja warrior stuff, so the lumber from the playset has turned into a big rectangular structure with the old main beam going down the center with a single swing off the end. The slide is now for the goats in the pasture.

My advice would be include a few things that will be able to grow with them. The slides are free, just look for them. Maybe handing someone at the landfill $20 to call you when the next one arrives. A horizontal tire swing has moved from the playset to a tree and is still used several times every week. When it was on the playset, I had a very solid swivel joint for it. Now it is just a rope. The swivel joint is now used to hold a 18" diameter circle piece on 3 chains. (ninja warrior obstacle). The swing is used almost every day and generally used 4+ times between the kids.

The one obstacle that gets the most attention is monkey bars. To allow them to be more interesting, the pipes go into notches which I have every 12". I can move the pipes to any of the notches. They are pinned so they don't rotate. You can make it easy where there is a pipe every notch or you can make it where you have to swing and fly 8' to the next pipe. That wouldn't be for a 4yo, but it might for an 8yo.
Aug 7, 2020 #22
M 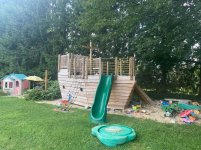 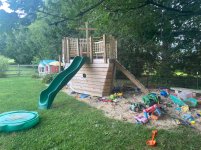 That was my project a few years ago.

Finished Phase 1 of the playground and we surprised him with it yesterday.

I bought the slide from Home Depot. It was a lot cheaper then Amazon, but I had to pick it up at Home Depot. The rock wall kit and swings where from Amazon.

Once the slide got here, I was able to determine the height for the deck. It's supposed to be 4 feet up, but I'm building on a slight slope, so I measured with a level from where the slide touches the ground and went up 4 feet. When done, we felt it looked too steep, so for his party I put a sack of red mulch under it and another to land on. We're going to take it out because that was a little slow for him.

I angled the posts for the rock wall, and rounded the wall. I thought this would make it nicer. Since I've never done any other version, I don't know if it was worthwhile or not, but I like it this way. I also created a W into two openings for him to crawl through on the rock wall since his name is Warren. The kit came with a rope, so I added that. He doesn't have any interest in it yet, but he might in time. It also included the handles, but he hasn't used them either.

The swings turned out to be a huge hit. Neither my wife or I can remember the last time we swung on a swing. It has to be several decades. When I tried to swing for the first time, I wasn't sure how, but then it sort of came back to me. I just don't remember it taking so much effort to get going!!! Warren absolutely loved being pushed on the swing. I made one lower for him, and the other at adult height. Warren would just giggle and say how much fun it was. So when his dad wanted a break from pushing him, I would take over, and then my wife took over. He swung for a very long time!!!

We put "his" chair up there, and he went right to it. He opened his gifts up there and that was great for photos. 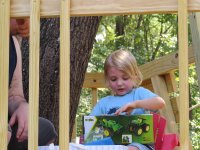 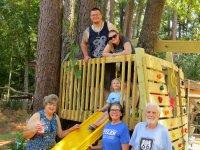 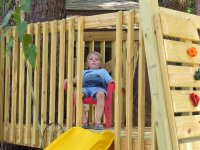 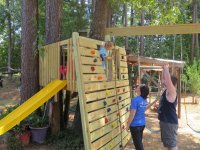 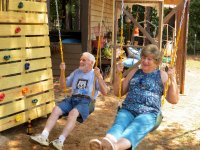 Some stuff I built for the grandkids. Wood bridge is a clear favorite.
Swing made from 12 ft. 4x6s from Lowes. Pirate ship uses dog ear fence pickets from Lowes.

Guess I was going against the trend...

When I was 6 Dad brought home an old MG with a cracked block... it ran but steam would come out the water jacket... he said have fun!

Wrenched on it all summer and learned to park and shift gears... also learned about dead batteries and flat tires and putting on a spare...

When the motor finally died I took it all apart... learned about cheater bars too.

Still have that odd collection of hand tools

When brother moved to the farm his wife wanted a new washer and dryer and he said money was tight... she sold the kids play structure at the old house and got enough to buy her washer and dryer... first person that "Showed" up from Craigslist. They also bought the brown rubber used in place of bark or gravel too.
Aug 31, 2020 #27

weathda said:
Here's something I threw together for my boys which is built off of an existing swing set which was given to me. Part of the platform was an old deck. I just reused the joists.

That is superb! Great job; looks great too! I do have one question; how are the rails secured to make them strong enough to stand up to rambunctious little rascals?
Aug 31, 2020 #28
OP

MIkeWard said:
Some stuff I built for the grandkids. Wood bridge is a clear favorite.
Swing made from 12 ft. 4x6s from Lowes. Pirate ship uses dog ear fence pickets from Lowes.
Click to expand...

Very creative and nicely done!!! I have a few ideas for Phase 2, and then Phase 3, but haven't thought of a bridge like yours. What did you run through the timbers? I'm thinking cable so it will last.
Aug 31, 2020 #29

When I was a kid, the neighbors a few houses down bought a BIG commercial playground swing set, slide, and teeter-totter like you'd find in a park. Those great big galvanized units. Man, we liked going down to their house. :laughing:

But we also enjoyed the home-made playgrounds like my dad built for us, and a few tree houses that other dads built in their yards.

I think kids just enjoy playing, running around, and getting all that energy out. And the memories will last a lifetime.
Aug 31, 2020 #30
N