looking for a little info. I'm planning a ride control mod on my LA854 loader on my kubota L4740.

I've already got the tee in NPT thread but just realized that the threads may be some kind of weird japanese version of NPT.

anyone know for sure if the loader cylinder fittings are NPT. I am planning on replacing the elbow on one side with a tee and hooking the accumulators to that.

looking for a little info. I'm planning a ride control mod on my LA854 loader on my kubota L4740.

I've already got the tee in NPT thread but just realized that the threads may be some kind of weird japanese version of NPT.

anyone know for sure if the loader cylinder fittings are NPT. I am planning on replacing the elbow on one side with a tee and hooking the accumulators to that.

talking about the Boom up down cylinder not the curl.
Click to expand...

I don't know which one, and not sure how I would determine it. The tapered thread - if tapered was used - will probably depend on where the loader was made and that can be a world away from where the tractor was made.

Our old Yanmar used BSPT for engine block and transmission fittings. The FEL was made in Canada & used NPT. OEM method of connecting the hydraulics involved a BSPT/NPT adapter in some places. All of which is pretty typical.

Whatever you find out, I hope you post it here.

Since you know enough about the difference to ask the question, you are probably already aware that there is no such thing as a, "weird japanese version of NPT".
The Japanese usually use the British Standard - BSPT. Which is argueably a better sealing threat than NPT and may be older. I'm not sure which is the original version - someone might know.

I'd start by looking at the thread shape with magnification, measuring the included thread angle, counting pitch (TPI), and some micrometer measurements.
Then I'd hand-fit some threads to see how they feel. Our local Ace Hardware has both NPT, BSPT, & adapters between the two in most sizes.
Nov 23, 2021 #4
S

I took the cylinder elbow, accumulators, valves, pressure gauge and measurements for a new line to a good hydraulic shop. British threads on pipe and o-ring sealing has been a problem before. Bench assembled at their shop. The old guy took the opportunity to school the young pups. British straight and tapered are common on robotics. This particular shop caters to that industry so they stock everything.

If I recall on the M59 the cylinder fitting was British male taper and two jic#8 to the hoses. One hose OEM and other to accumulators.

Soft ride makes a remarkable difference doing loader work and highly recommended. Had the hose from the cylinder tee to the accumulators armored with a external spring for extra protection.
Nov 23, 2021 #5

Smokey, do you know if the British male and female are both tapered or just the male? On a hydraulic fitting site I ran across a reference to a sealing protocol that used a BSTP tapered male but the female was BSPP. They seemed to think that was a standard & it for all I know it might be.

I know enough about tapered threads to make sure that I've got the proper male threads for hydraulics or fittings into the engine block. It didn't occur to me that the female British Standard thread form might be different from the male.

And I've still got to install that soft ride on mine. Looking forward to it as a winter project. I like the idea of more protection from pressure spikes in the hose.
rScotty
Nov 23, 2021 #6
S

I don’t know. British threads still throws me. That’s why I try to take what I can to the hydraulic shop experts. Just when I think I know what I’m doing I get humbled or a little humiliated.
Nov 23, 2021 #7
T

These guys have some British thread fittings
I had them on my Quicke (ALO) loader.

Thanks for all the info, you're right the BSP thread was the weird japanese thread I was worried about.

I found a good hydraulic shop when I did my hydraulic ssqa setup. and reasonably priced too so they will be getting a visit when I get the time.

I will have to pull the elbow and compare to the NPT Tee that I have.

British thread in hydraulics is probably more common worldwide than NPT. My M5030 with Canadian built loader had some of both.

When I took the OEM elbow from the M59 FEL boom cylinder to match it had an O-ring above the obvious tapered threads. It was sealing nothing. The shop even asked what was the o-ring was for? It was not a surface sealing type of fitting. Just one of several oddities I’ve found.

I cannibalized some of the soft ride hardware to fit my application. 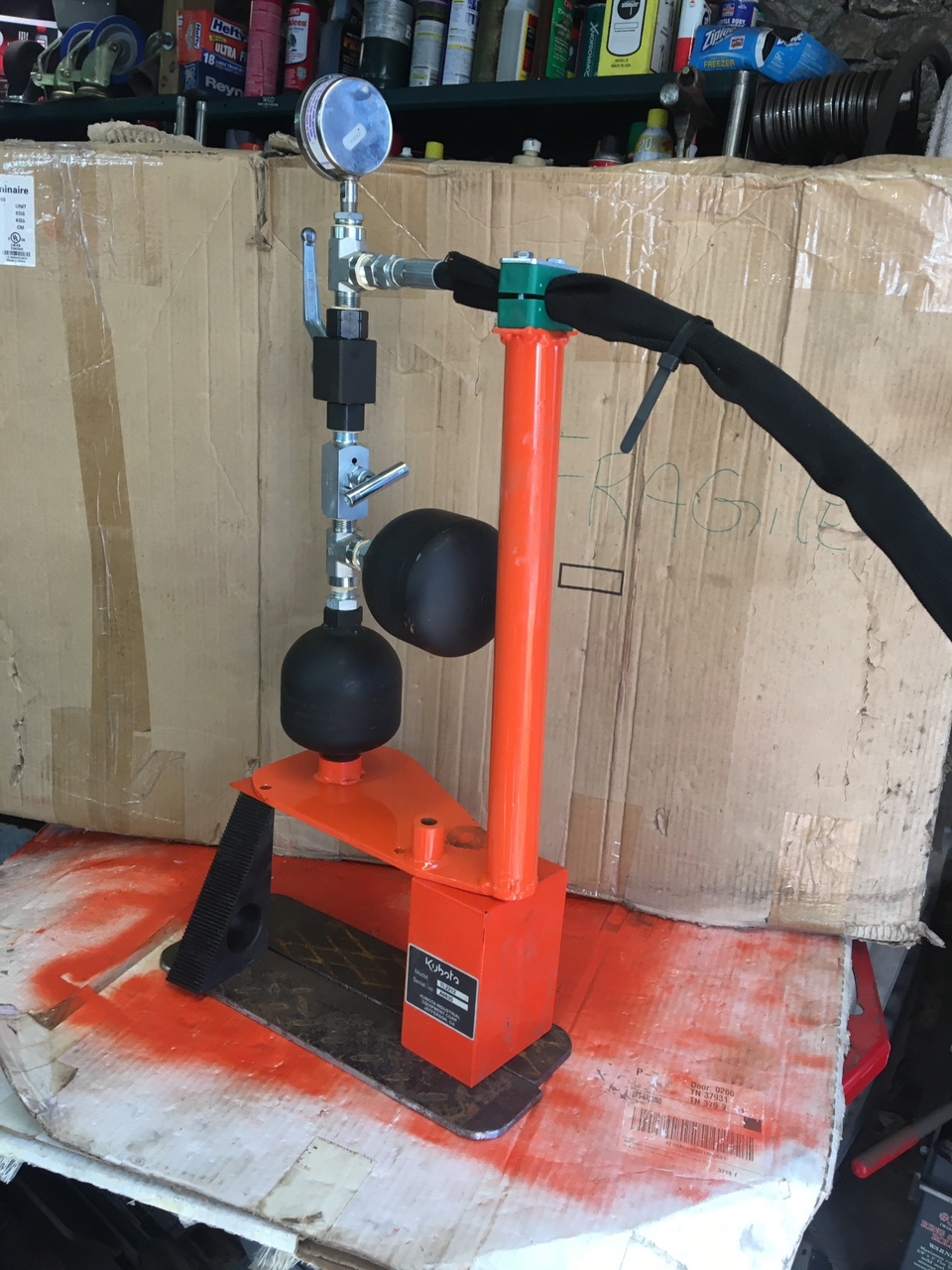 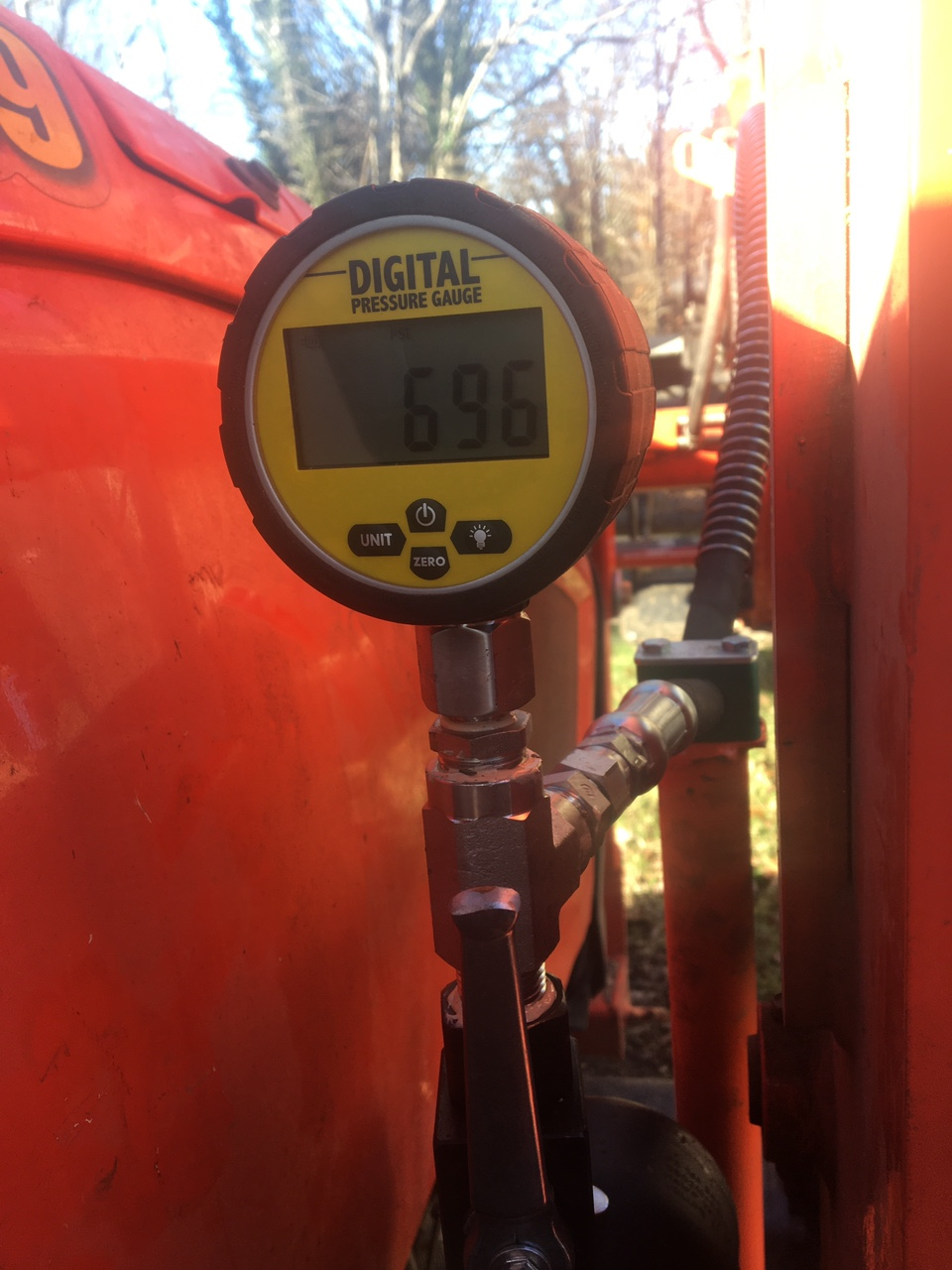 Modern tractors have done a better job of ergonomically isolating hydraulics from the operators in case of leaks or failures. I placed the majority of the soft ride components behind a OEM plexiglas window/shield for operator protection. Those accumulators store a lot of potential energy. Just something to consider. Bought some accumulators off eBay to use for a B26 loader soft ride system. One accumulator bulb might work for its’ size. Still pondering on how best to mount and shield.
Nov 24, 2021 #10
T

Smokey, did you have a thread somewhere else about your gauge? I remember someone doing something to measure the weight they were lifting.
I dunno how much difference would be between any of these accumulators, but my loader only has one bottle. (~2500#capacity)