The purpose of this thread is to hopefully assist others with slow hydraulics on the LK 2554 and LK 3054 Kioti tractors. I am in no way an expert on this subject, but have a mechanical background and years of experience growing up on a farm and owning tractors.

First the background. I bought my LK 2554 about 12 years ago at a local equipment auction. It was in bad shape and I had to replace the engine right out of the gate. The day I brought it home, it threw a rod backing it off the trailer. The 4 wheel drive did not work and the hydraulics were weak.

I fixed all the issues and increased the pressure on the hydraulics from 1500 PSI to 2200 PSI. This has met my needs over the years, but I finally got tired of having to run such a high RPM in order to use the loader. The loader would lift the front wheels off the ground, but only at 2500 RPM and barely could get it done. I have always felt like the pump was just weak and needed to be replaced.

Thanks to TBN, I found out that Kioti upgraded the hydraulic pump from a 7 GPM pump to a 10 GPM pump on later year models of the LK 3054. Seeing as the two tractors are so similar, I decided to research the possibility of upgrading my pump to the 10 GPM unit. Turns out that the only thing different between the 10 GPM and 7 GPM pump is it uses two long bolts instead of studs on the outside mounting holes. So I ordered the pump and bolts Tuesday, and they arrived on my door Friday. In the box was the pump, new bolts, new gasket, new O-rings and a new pressure-relief valve. Below is a picture of the old pump on the tractor. 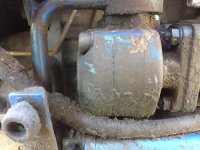 First thing I did was warm up the tractor and hydraulics, then run a series of speed tests at different RPMs to compare the two pumps. Then I installed a pressure gauge and lowered system pressure down to about 1200 PSI. I did this for safety, seeing how I had to increase it so much when I first got the tractor.

Next I cleaned the pump real well so I did not get any dirt in the system. Then, I loosened, but did not remove, the two nuts and two bolts that held the pump in place. Then I loosened the bolts for the pressure line and the bolts for the suction line. I was expecting to lose a lot of fluid at this time. To my surprise, very little fluid was lost during the entire process.

I removed all the nuts and bolts I had loosened earlier and bumped the pump with a hammer to separate from the housing. I then fished the pump out, being carful not to knock any trash into the open suction line. The fuel line going to the fuel pump was in the way, but I managed to get the pump out without disconnecting the fuel line.

Then I placed a shop towel over the exposed suction line to keep it clean. To remove the two studs I used the two nuts and jammed them together tight on the stud and put my wrench on the inboard nut to remove the studs. Worked great! Next I cleaned the old gasket off of the housing, making sure it was clean. I removed the O-rings from both the pressure and suction lines again making sure to put the shop towel back over the suction line when I finished. Time to install new pump.

Now that I don't have the studs to hold the new gasket in place, I decided to use grease and coat the housing to hold the gasket. I put the new O-rings in both the lines again, placing shop towel over the suction line before fishing the new pump in place.

After getting pump in place, I turned the pump to line up the splines to the gear shaft. Once aligned, I slid the pump as far as I could onto the housing. Then I started all the mounting bolts and tightened hand tight. I then cross-tightened each bolt a little at a time till the bolts drew the pump up nice and snug against the housing. I did not use a torque wrench but instead used my Dad's method of getting the bolts as tight as you can, then going another half a turn. Not recommended but worked for me. You must be careful using this method not to strip threads or break a bolt.

Next I bolted the pressure line to the new pump. Then I removed the trusty old shop towel and bolted the suction line in place. Below is a picture of the new pump installed. 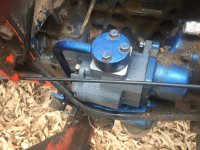 Now it is time to replace the pressure-relief valve. I had to take one line off in order to get a wrench on the valve. I took out the old one and put the new one on. Below is the relief valve installed. It is the non-painted bolt head. 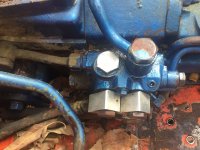 I am now ready to start the tractor and check for leaks. After finding no leaks, I cycled the hydraulics to get all the air out of the system. I then increased the pressure back to 2200 PSI. Now I ran the same test as I did before I replaced the pump. Below are the results of those tests.

I paid the extra $15 for direct shipping from Kioti plus bought parts that was included with the pump I did not know they provided. The pump was just under $600, my total was $645.18. Totally worth it IMO. It's a totally different tractor. It will now lift the wheels @ idle.
Mar 11, 2018 #5
P

Great, thanks again. I now have to check my pump to see if it looks like your new one; a clear difference with the longer outside fasteners
Mar 11, 2018 #6
L

Patches, your are welcome and thank you for your help thru the process. It would be interesting to see how your loader compares in performance. I am running a different valve now than the factory one and it is rated @ 12 GPM. Not sure how much if any difference that makes in speed.
Mar 13, 2018 #9
P

It appears the replacement pump on my unit is the newer, 10 GPM pump; looks exactly like your photo with the longer outside fasteners. I will ask the dealer next time I'm there, if he even remembers what he put on it. The replacement was done after the "F"# pump was available
Mar 13, 2018 #10
OP

That would be my thoughts for sure. You could do some time test to see how it compares to my test. That would let you know kinda how the pump is performing. Also if you have a pressure gauge it would not hurt to check where you are.
You must log in or register to reply here.
Share:
Facebook Twitter Reddit Pinterest Tumblr WhatsApp Email Share Link