I bought a MF GC2600 about 3 weeks ago. It was used, but only had 144 hrs which seemed really low for a 2011. My only problem right now is one of the rear lights was broken (along with 1 bolt and the guard missing), and the fuel cap is cracked across the threads in 3 places. A dealer 20-30 miles away stocks the caps and can order the guard I think. Both were around $20 so not too bad, but the light was $92. I don't work at night so it's really just bothering my OCD, and not worth $100. I patched it back together myself after the tiller vibration shook it loose to where it was hanging by wires, but it still bothers me. Does anyone have a line on where to get parts for these? I found a MF parts site, but a couple days of searching came up with nothing close to what I need. I've also checked eBay and a couple other sites for the heck of it. Nothing. I don't really want to drive 30 miles to a dealer the opposite direction I normally go, then go back again to pick up a special order part, in between their hours and my work schedule.
Jun 2, 2014 #2
B

Why not substitute the light with a selection from a local auto parts supply? Like GROTE or similar brand.
In all probability there will be a very close match available that will do the job at a fraction of the OEM part cost. In fact you may find that your OEM part is pure GROTE anyway.
Jun 4, 2014 #5
OP
P

PILOON said:
Why not substitute the light with a selection from a local auto parts supply? Like GROTE or similar brand.
In all probability there will be a very close match available that will do the job at a fraction of the OEM part cost. In fact you may find that your OEM part is pure GROTE anyway.
Click to expand...

I just might take a look to see if there's something that might do the trick. I doubt there will be an exact match, just based on their design, and I didn't see anything matching on Grote.

This is what they look like, front and rear. 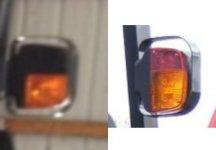 Any dealer will ship parts to you, and there are online parts suppliers as well.

The parts for any of these tractors, regardless of brand, or model, are generally very high priced.

Ed of all trades

I also went through that on my 2310; the "mickey mouse" lights on that model had no guards at all. After banging, breaking and re-gluing the plastic lights three times, I priced replacements. Not as bad as yours, but they were expensive at $60 or so several years ago.

I ended up replacing them with far less expensive Kubota (NO!!!) lights, and then (after hitting those, too), finally did what I should have done in the first place: moved them to the INSIDE of the ROPS.:thumbsup:

No problems since. It's just darned unfortunate that the OEM lights are the widest point on the tractor, and it seemed I was always looking down for clearance when close to things instead of up at the lights.

I can sort of understand the position outside, where they won't interfere with operation of the BH when the seat's spun around, but I've found I don't have any problem with the lights on the inside. And it doesn't really show, but the Kubota lights are a bit smaller in diameter and a bit thinner, too-- but just as bright.

Here are before & after pics (oops, after & before): 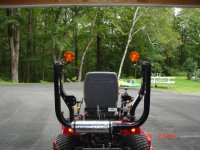 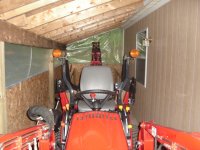 For my front and rear work lights I purchased a pair of clear lens halogen fog lights from Wallymart for about $15 when on sale.
Usually blister packaged by the pair.
The design pattern is just right, wide flat short range lighting, just what we want for a work light.
One mounted front center and other center rear, both aimed slightly downwards. Practically like daylight when working!
You must log in or register to reply here.
Share:
Facebook Twitter Reddit Pinterest Tumblr WhatsApp Email Share Link