Hello all, I am a retired mechanical engineer having stopped looking for a regular job for about three years now. I have been looking to keep my gray matter busy other than working on the regular upkeep jobs around the house. I like to tinker, design and build things; I have a fairly complete machine and fabrication shop at home and am well versed in the use of various computer programs including 2D and 3D CAD. Some time ago, I came across the Youtube video of a tracked vehicle called "Swamp Thing" which was built by an individual named Tom Zervas in Saginaw, MN sometime around 2011. Here's a photo of it and you can see his video here: 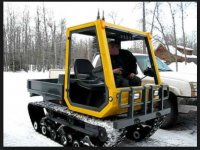 This design interested me and I tried to find out more about it. Unfortunately, Tom Zervas died last year (2017) and the youtube video is all I could find on this machine. Being an engineer, I decided to design and build one on my own. I researched a bunch of threads on this site and more than a few others, and watched a bunch of videos as well. I planned to use a Geo metro engine or similar, but recently came across a cheap Toyota Echo due to it being crashed and totaled. I plan to use that engine and auto transmission. I will use differential brake steering and build my own tracks from conveyor belting and steel channel sections. I spent a few months modeling up various configurations and the following is my current design. Any comments or suggestions are certainly appreciated. I plan to regularly post new photos of the parts I make and keep this thread running while I progress it thru the build and hopefully, testing process. Let's have some fun and a few beers doing it! 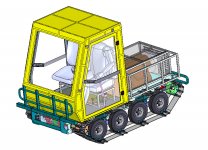 Make it float, too.

I've seen vids of people who have cut most of the sidewalls off tractor tires and used them for tracks - driven by rubber tires. It looked pretty slick and easy.
Jun 8, 2018 #4
C

Make it float, too.

Skip the cab! Make it a freighting deck like the "mules".
Argo Outfitter XTi 8x8 first look - YouTube This or even "flatter".

There is a lot of tech in a tracked vehicle differential. Control power at the pumpkin, and you can achieve amazing performance!
Jun 8, 2018 #5
F

CalG said:
There is a lot of tech in a tracked vehicle differential. Control power at the pumpkin, and you can achieve amazing performance!
Click to expand...

G'day Mate and welcome to TBN from Downunder.

I'd spend my engineering time on a better suspesion and maybe water drive system.
Jun 9, 2018 #9
OP

OK, I got the engine out of the damaged Toyota Echo. It is 1.5L fwd car rated at 108 hp and 103 ft-#. Yes, I know it is a bit strong but I was having trouble finding a Geo Metro 3-cyl engine. These Echos are plentiful and I thought it may be possible to detune it by disabling a cylinder or pulling a NASCAR trick of adding an intake restrictor plate. Anyone else have a better idea? 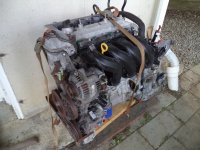 I plan to swivel the normally transverse engine around so the axles point front to back. This engine has an open differential which will allow me to lock the axle pointing aft by bolting it to the frame. The forward axle will then be connected to the drive differential up front for driving the tracks. For the drive differential, I bought a rear differential from a 2000 Toyota Rav4 which is also an open diff. In case you don't know what an open differential is, it does not contain any limited slip type devices. The Rav4 diff I bought has a decently tall ratio of 2.93. I calculated the top speed of my snowcat (which I have named "Snowzer") to be about 20 mph with the engine spinning 6000 rpm. I plan to use the CV joints from the Echo to fabricate a driveshaft to connect the engine to the drive diff. An Echo wheel hub flange will be machined to bolt to the drive diff input shaft which also has a flange. I'll have pics later in the project. Here's some of the parts I scavenged from the Echo before the carcass was hauled to the scrap yard: 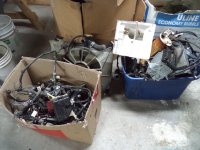 I've also made up some items primarily consisting of suspension and steering brake components: 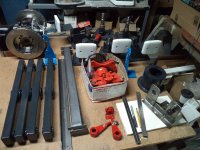 My plans for the following week are to measure up the engine, tranny and radiator parts so I can accurately update the computer models of them. I hope to design up engine mounting brackets too.
Last edited: Jun 9, 2018
Jun 9, 2018 #10

I've never heard of a Toyota Echo. Had to look it up. Is it the same as the Yaris?