I started a thread a while back announcing Honda's Pioneer 520 New Small Pioneer, 520 has dump bed, slightly larger motor, and a few other upgrades. and in it mentioned I had decided to buy one. I can't figure how to edit the title of it updating that I did, so I'm just starting another.
Anyway it was due in January but got moved to late February, it finally arrived. For those not familiar with this little SXS it's basically a Pioneer 500 with a little dump bed added. It has a slight bump in engine displacement and a few minor changes. It's 50" wide and utilizes what's basically an auto clutch, 5-speed manual transmission with auto shifting mode or manual mode using paddle shifters. Top speed is 38mph. This is a pretty basic little machine with manual steering but it's light enough it really doesn't need PS IMO. One thing I don't like is that it doesn't have a rear differential, I believe the P700 is the same. It's like most ATV's both rear wheels turn the same.
It's fun to paddle shift it in manual mode but in manual or auto mode it lurches a bit when shifting. It was quite abrupt when brand new but has smoothed out some. It's just different than the seamless power delivery of a CVT. On the positive side it's nice being able to short shift it into a higher gear to lower rpm. Tires are 24" but I have 26" on order which'll raise overall gearing 8% or so, it is geared pretty low stock. It'll also gain an inch more ground clearance. Shifting to reverse is a two handed operation requiring pulling in the left paddle while also pulling a handle with the right hand but it has become second nature now. I really do like driving it on my trails especially the narrower ones that my wider SXS just barely fits on. It'll also be a little easier to transport. They price out at $9,499 and given it's a brand new model, plus covid limited supply and high demand, that's what I had to pay. Actually they added a stupid $80 doc fee so I wrote the check for $9,579. Other than the larger tires I'll probably add a 1/2 windshield and that's about it. 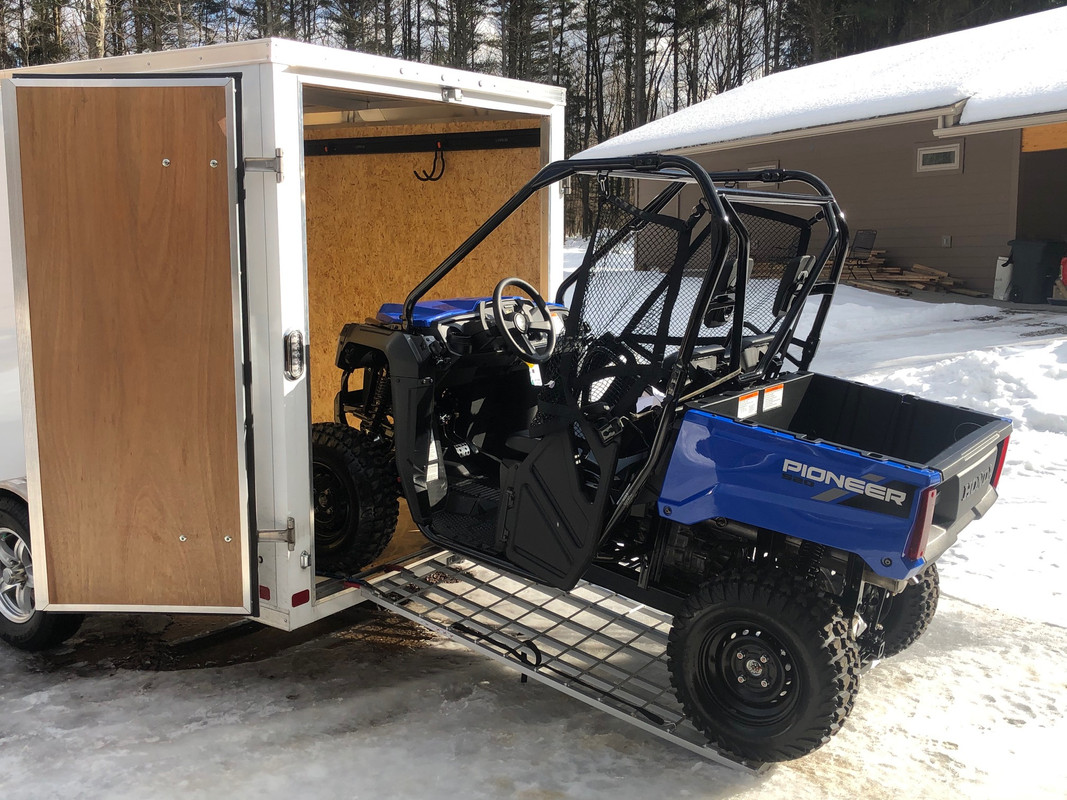 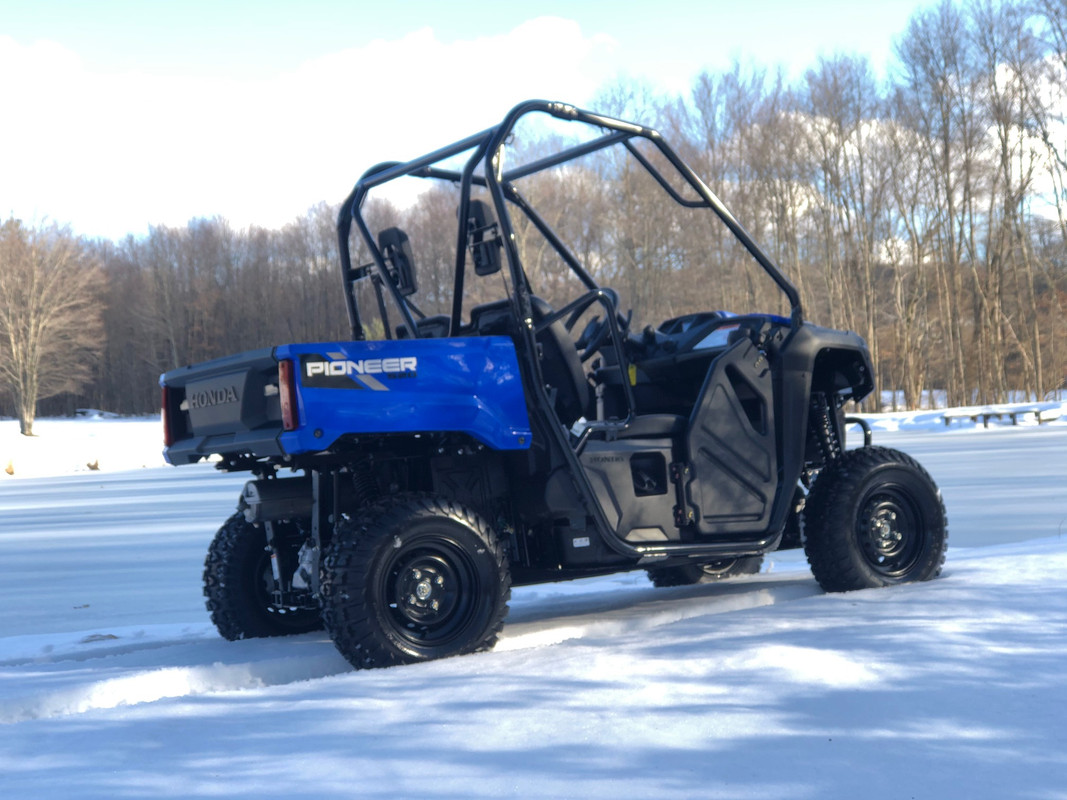 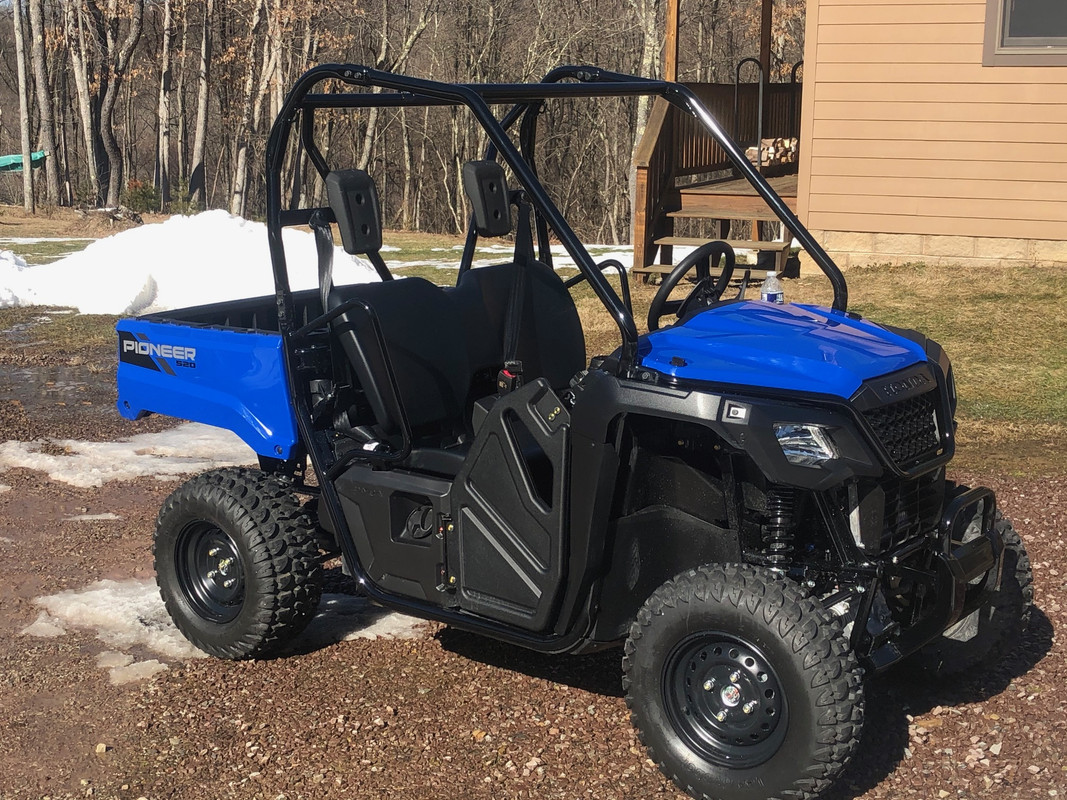 Hi I was looking at that model Looks great. Im currently using a 500 pioneer for work I GPS Fields and need the narrow stance for maneuverability. Couple questions, How is The 520 motor can you tell any difference compared to the 500? how does the dump bed work? I added 26" 6 ply tires with 14" rims made all the difference in the world in terms of its capabilities (especially with no front locker).
Thanks for your review.
Mar 7, 2021 / New Pioneer 520 Arrived #5
OP

Jeff, I'm sorry but this is my first Pioneer so I can't offer a comparison between it and a p500. The dump bed is strut assisted, you push down on a handle and it raises on its own. I haven't had a heavy load in it such as gravel to see the balance point but it seems to work well. I agree, in the interest of 1" more ground clearance, and slightly taller gearing, I just got new 12" alloy wheels with 26" tires.
Mar 7, 2021 / New Pioneer 520 Arrived #6

Milo said:
Jeff, I'm sorry but this is my first Pioneer so I can't offer a comparison between it and a p500. The dump bed is strut assisted, you push down on a handle and it raises on its own. I haven't had a heavy load in it such as gravel to see the balance point but it seems to work well. I agree, in the interest of 1" more ground clearance, and slightly taller gearing, I just got new 12" alloy wheels with 26" tires.
Click to expand...

Thanks I'd be interested in your one year review if you don't mind. I'm sure it's under warranty but I had similar shifting issues with mine. I adjusted the clutch which was pretty easy cleared up the lurching and hard shifting a lot, I'm pretty hard on it when I'm working but has been really reliable Do wish it had a small bed and the auto transmission feature though.
Thanks again for your review.
May 4, 2021 / New Pioneer 520 Arrived #7

Thanks for your initial review on the new P520. I have a deposit on a red one in West TN for use on the farm and trails. Looking forward to reading more about everybody's experiences.
May 6, 2021 / New Pioneer 520 Arrived #8

Congrats! I bought a footshift Rancher last fall, love it.

Check out Jason Dimmick's channel, you will find tons of mods. Loook in his playlist under 'Pioneer 500' and 'Mighty Mouse' playlists.

He added all kinds of goodies.

Thanks for the review!

I'm looking to buy a 520 once they become more available in my area. I'll be checking your thread for any updates.