Just took the carb apart and put back together. These 2 ports were open without any hoses when I found the bike (it was essentially a dumpster find) so I'm not sure where they should get routed to, if anywhere... or capped.

Any ideas? (Note - the bike is running but I still have a couple other items to address...)

I can't seem to find a specific diagram with this carb arrangement. 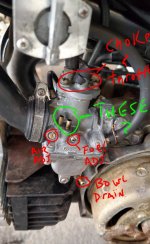 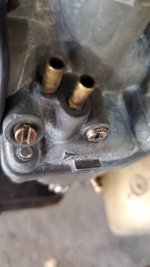 It would help if you gave the carb model number.

One of the two fittings you circle is a vent. The other is the fuel inlet. If you look inside the float bowl the vent stops at the top of the float bowl and the inlet will go to the float needle, which closes it off when the bowl is full. I think the outer one is fuel but I'm not sure. The vent fittings should have hoses attached to them which run down behind the engine in front of the swing arm. That keeps dirt out and lets any overflow run underneath instead of on a hot engine.

Your "fuel adjustment" is the throttle slide stop. In raises the throttle slide which lets in more air AND fuel. But when you raise it, it also leans out the mixture some because the vacuum is less. The air screw only affects idle mixture and I'm not sure it's not a fuel screw. Mikunis are one way and euro carbs are the other and I can't remember which is which. If it's fuel, idle will get richer as you turn it out (counter clockwise). If it's air, it'll get leaner. As the throttle is opened from idle to WFO, the idle jet and adjustment, slide cutaway, needle shape and position, and main jet affect mixture, in that order.
You must log in or register to reply here.
Share:
Facebook Twitter Reddit Pinterest Tumblr WhatsApp Email Share Link