After finishing my pole barn last month, I decided to start on phase 2 which is to add covered parking for my trailers and a future pontoon boat. I'm building two 12x32 parking spots with a four foot overhang which will be for firewood storage in IBC cages. One parking spot will have a 10' min height and the other will be 8'. The plan is a 28x32 roof attached to the south end of the barn. Two 32' double 2x12 beams will support the roof, each beam held up by four 6x6 posts. 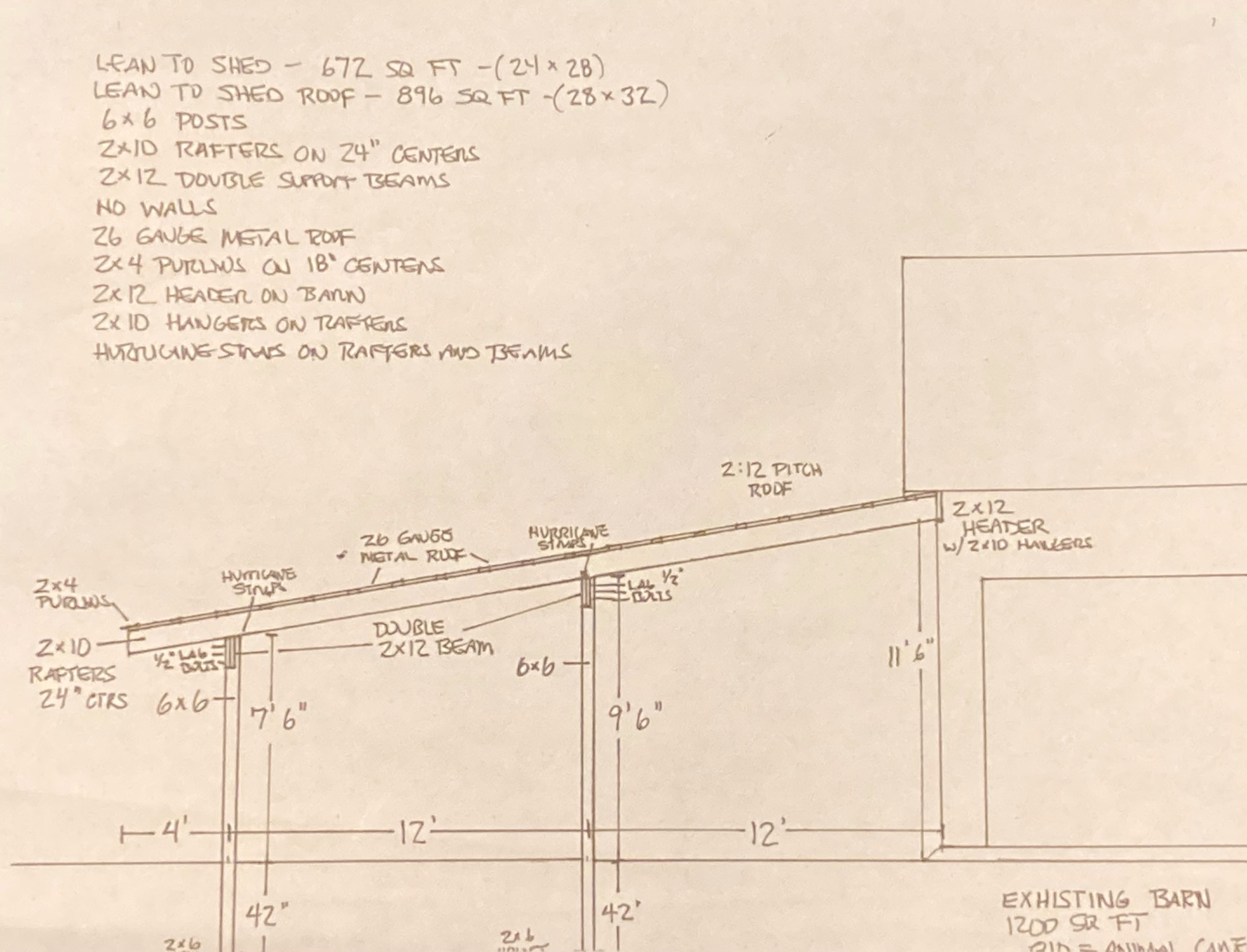 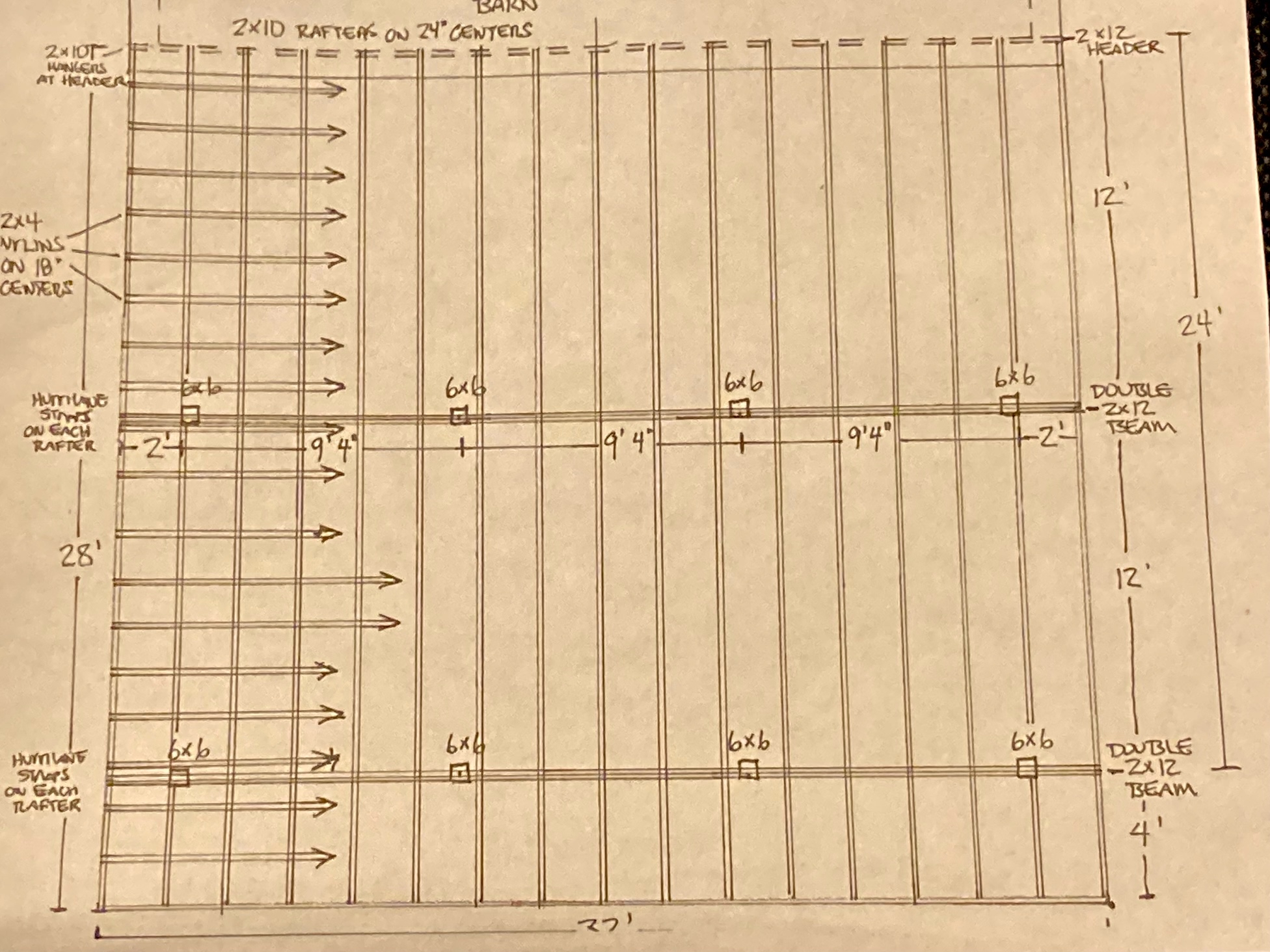 Last Saturday we dug the eight 12" holes with the post hole digger. Holes 1-6 dug easily in under 10 minutes each. Hole 7 went through 4 sheer pins due to rocks and roots but we finally made it down to 45". Hole 8 was a bear, and the auger could not get past 10" due to roots. So we broke out the backhoe and spent an hour getting the roots out down to 24" and then we used the auger to get down to 45". 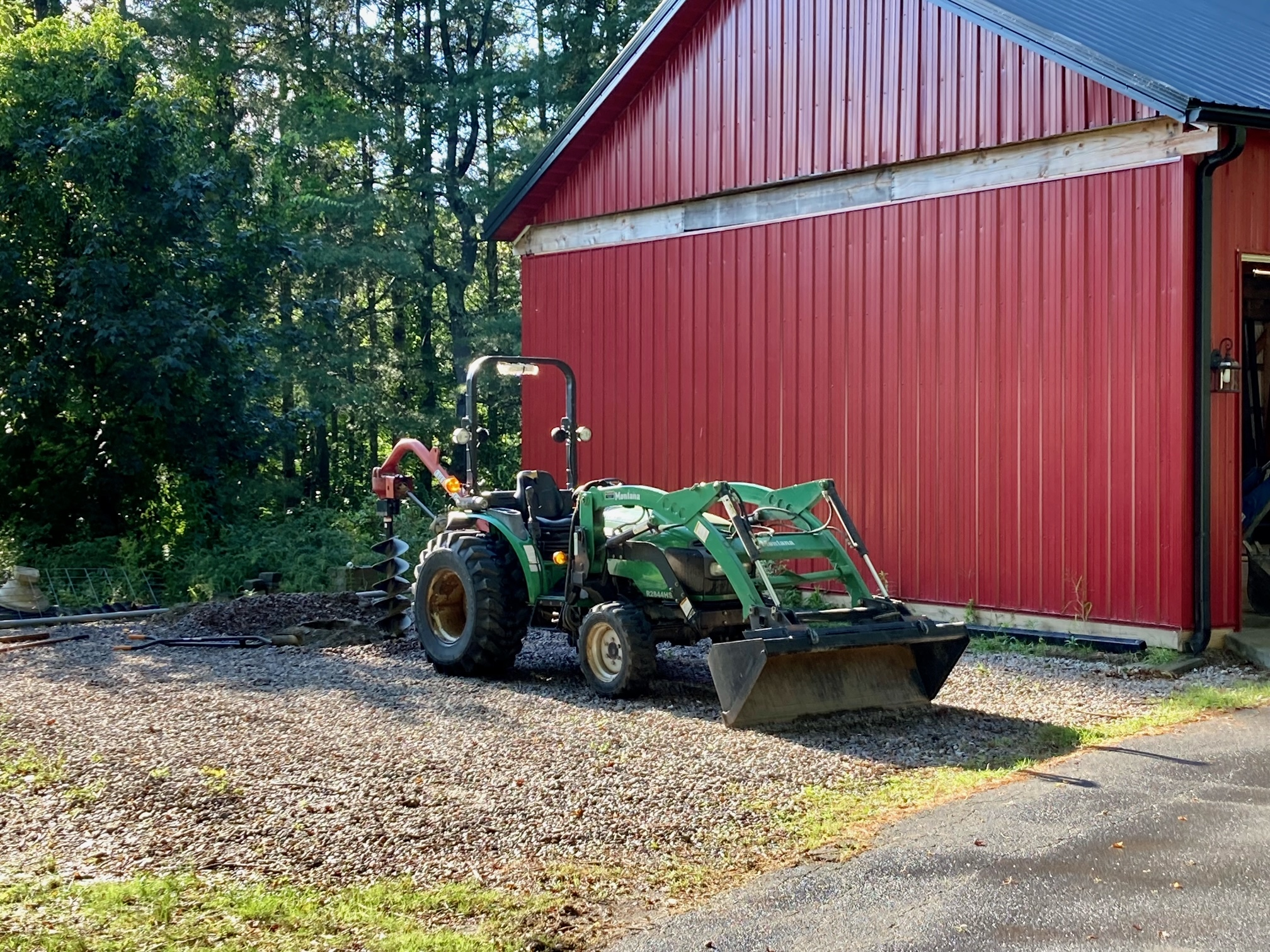 Monday morning we had the building inspector out to inspect the holes and then started on the far support beam. 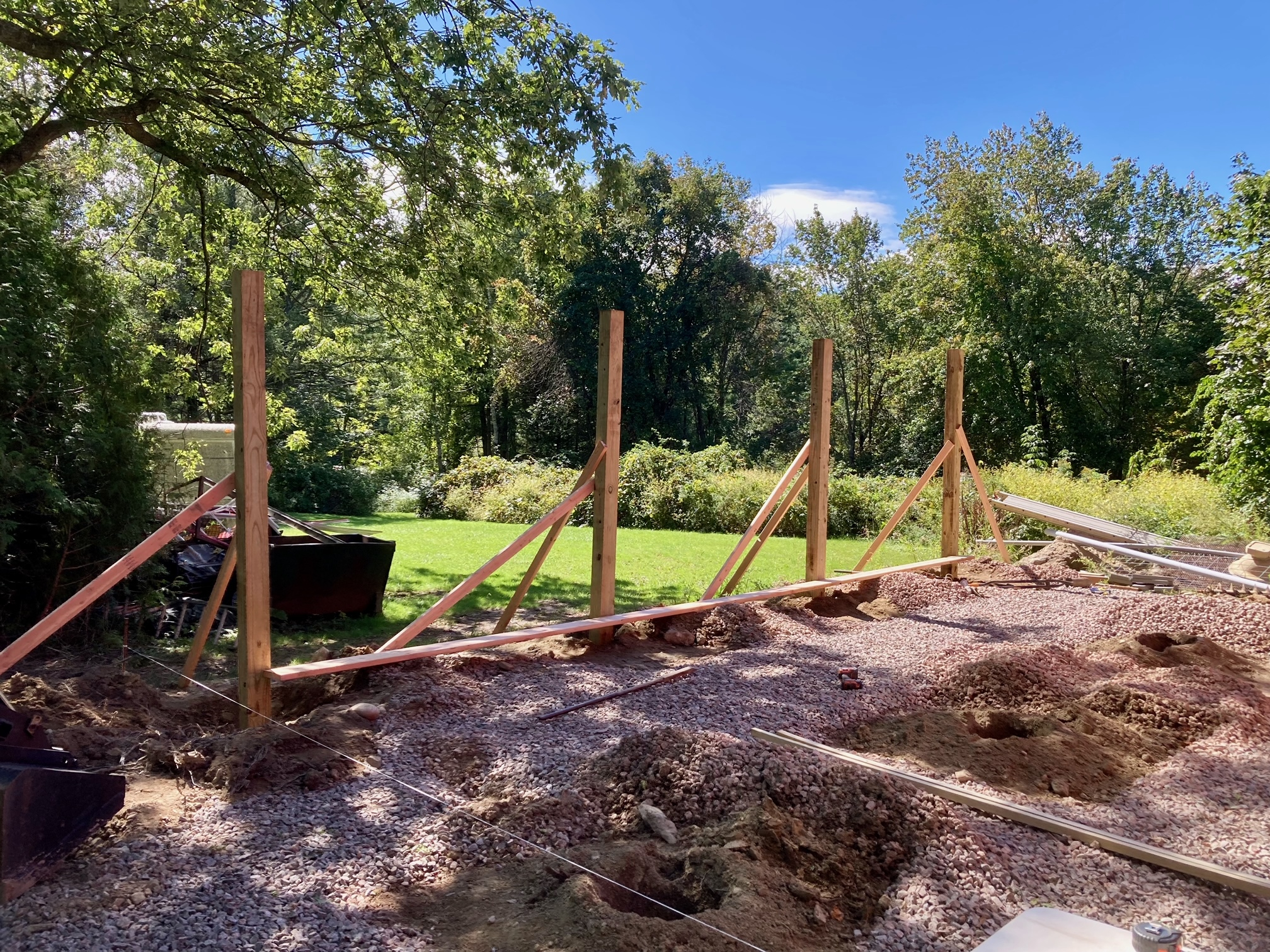 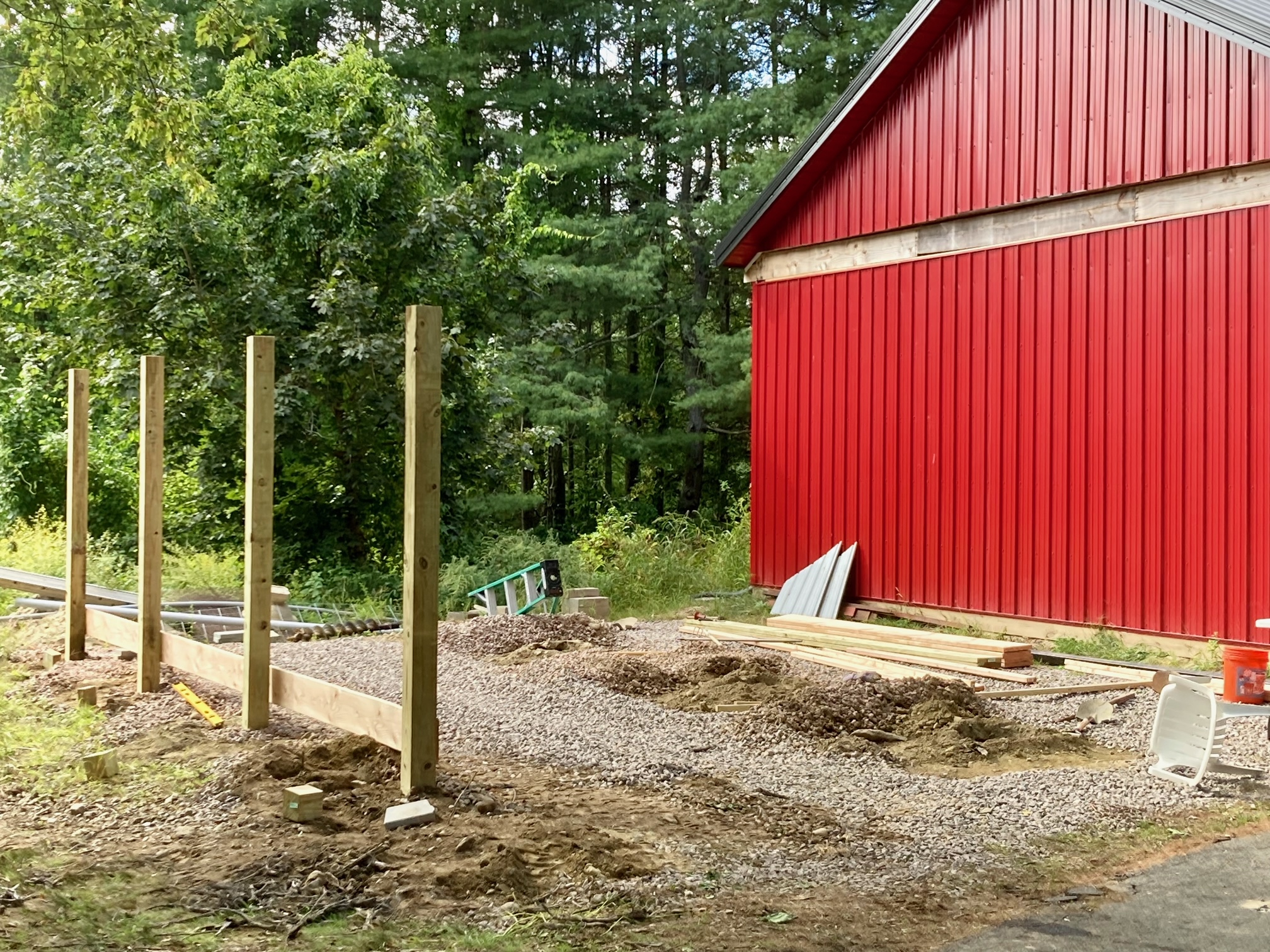 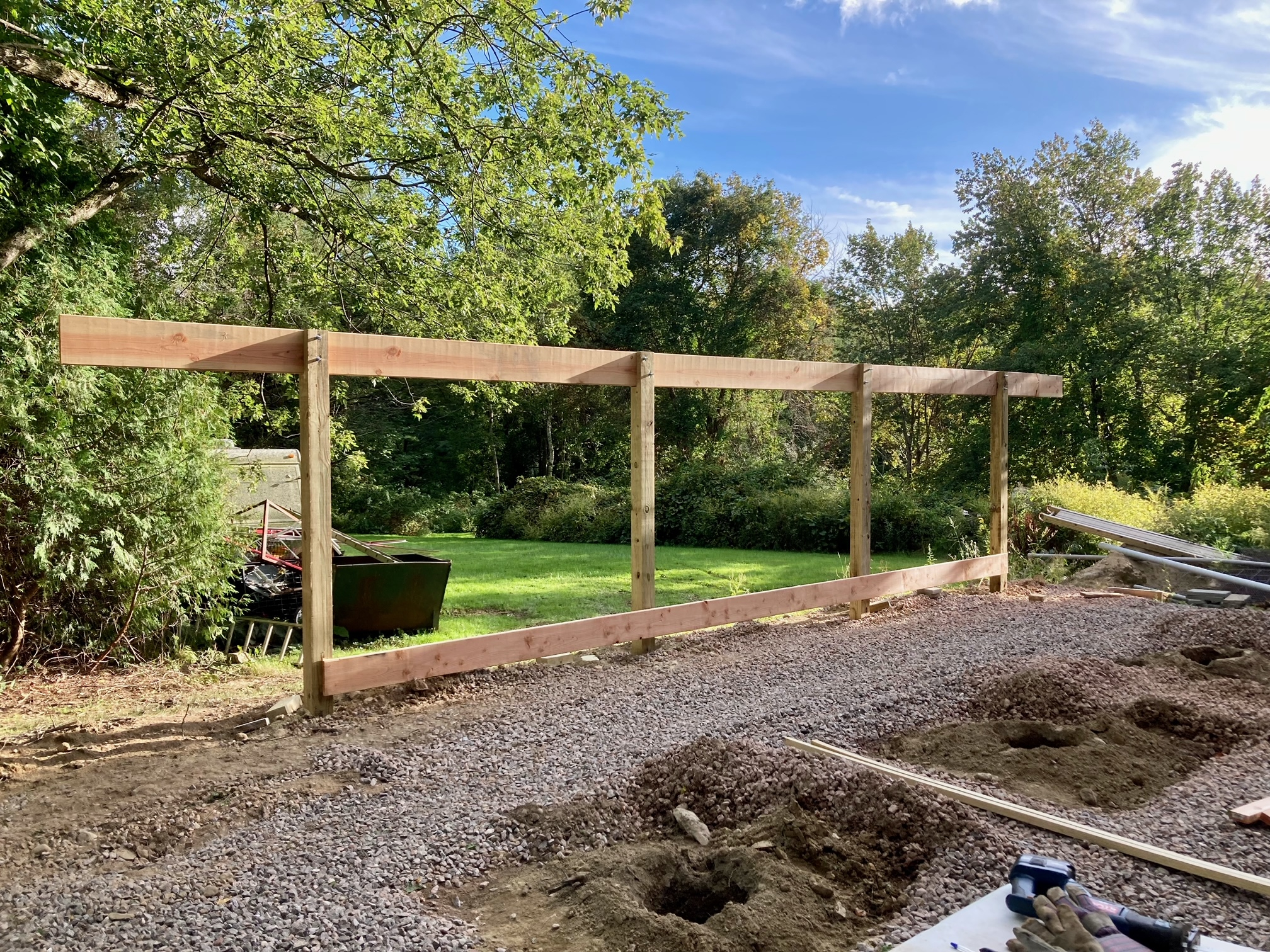 Wednesday we set the remaining 4 posts and second support beam. 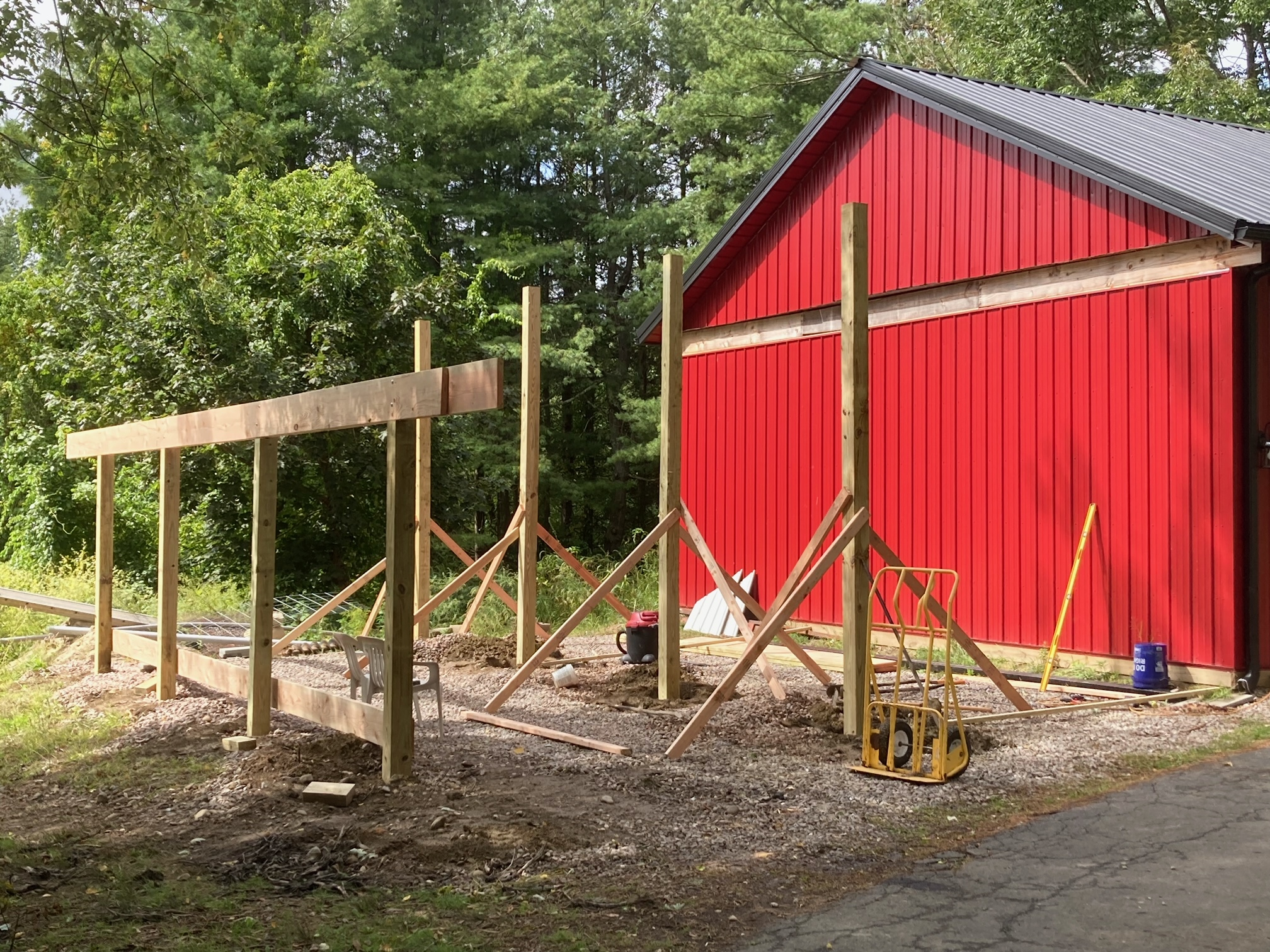 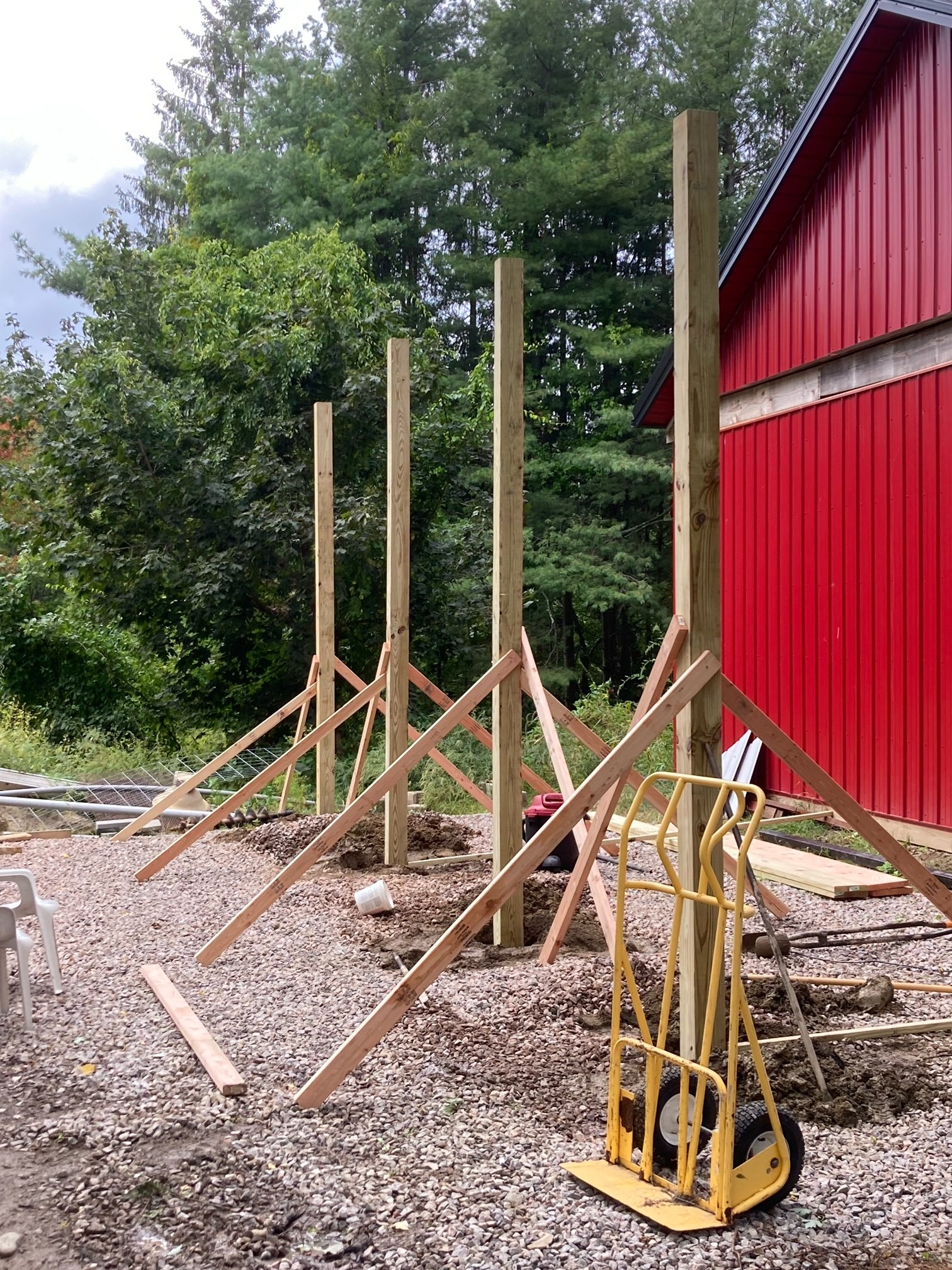 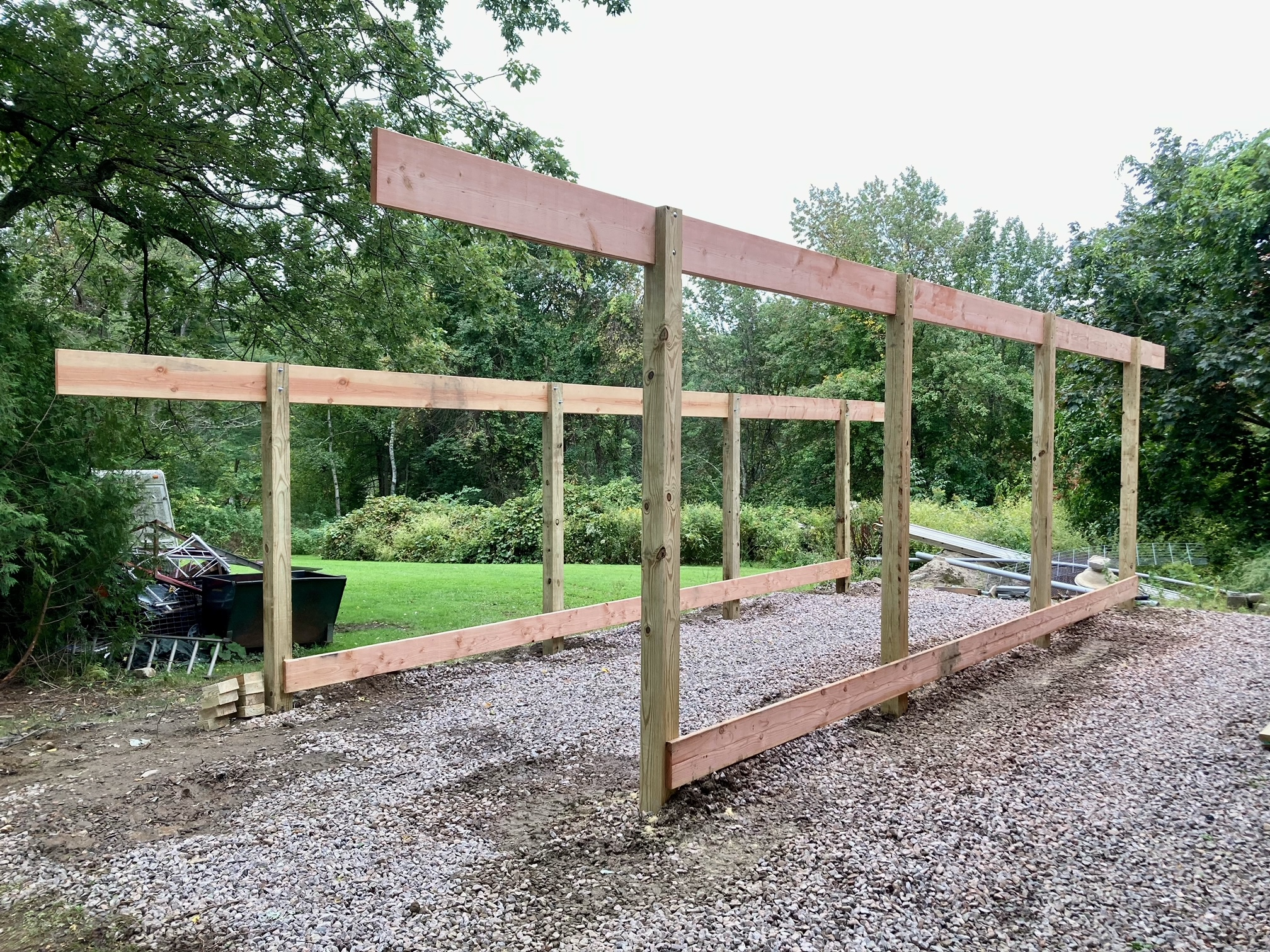 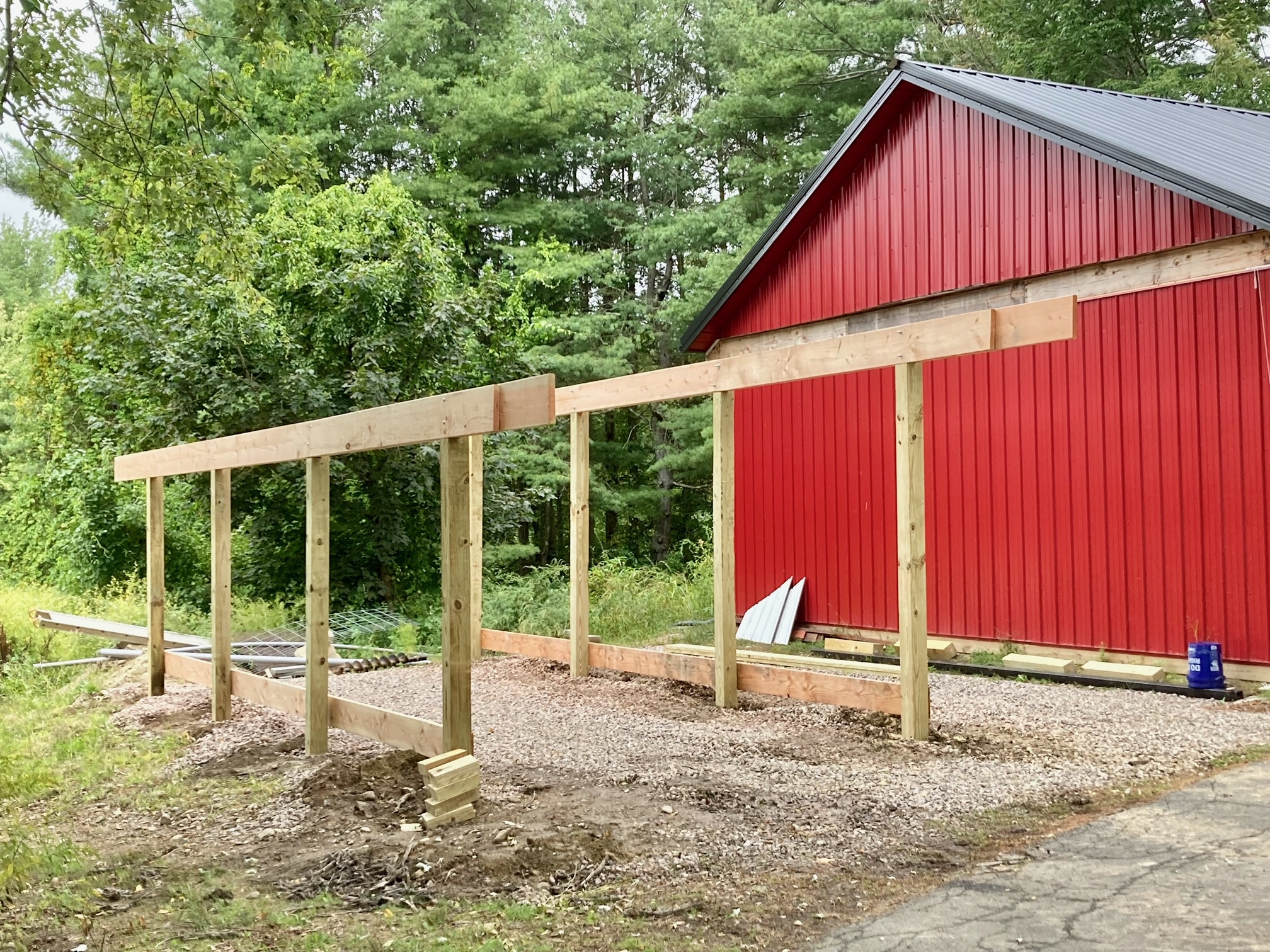 Friday we started the 28' 2x10 rafters. Just two of us working, me and my father-in-law, so we let the tractor do all the heavy lifting. 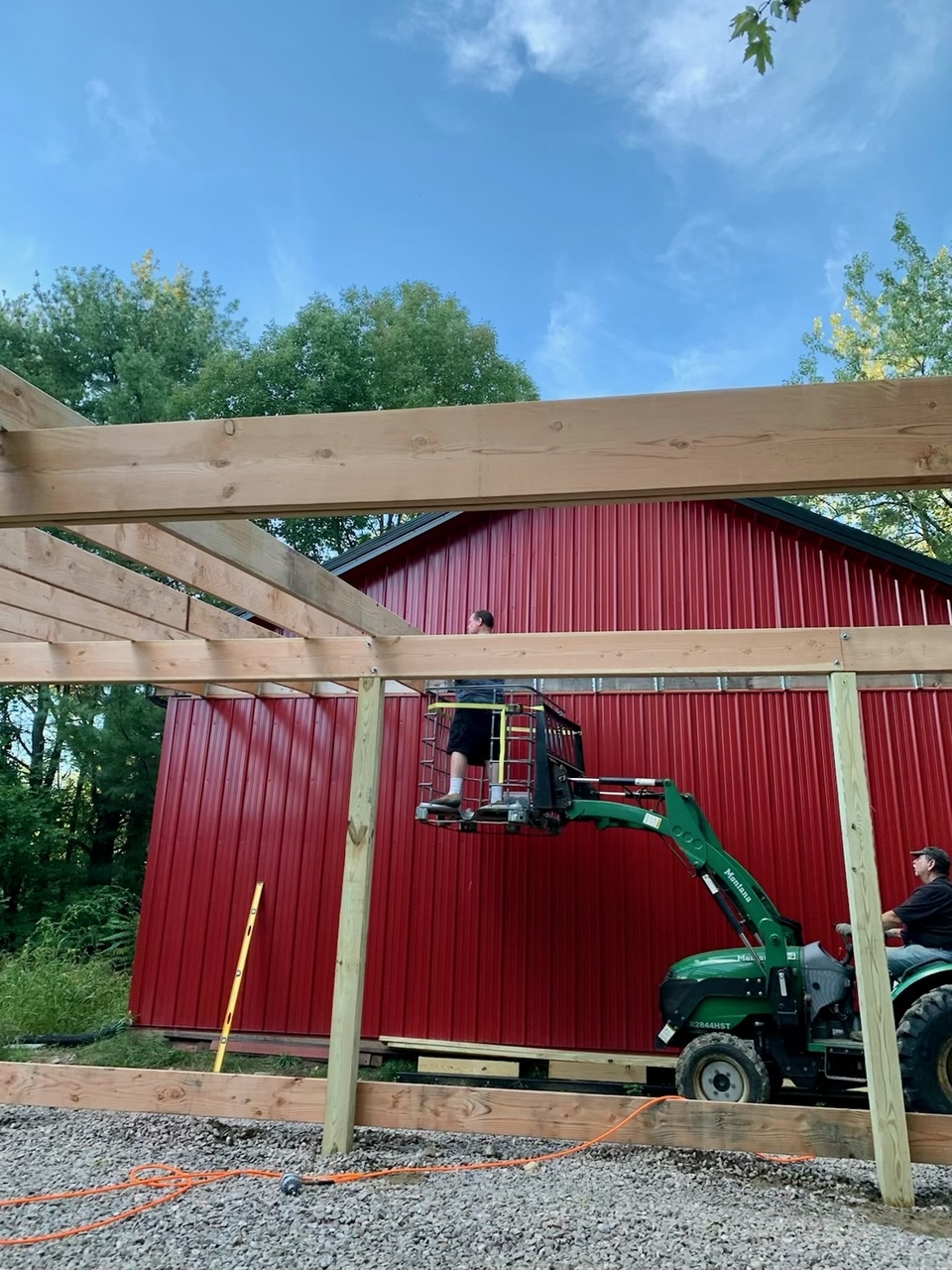 Today we finished the rafters, added the hurricane straps and trimmed the main beams to length. I have to go back to work next week, so work will continue on the weekends. Next is 2x4 purlins and then install eleven 28' metal roofing panels. Note the pics from my I-phone make the posts look off vertical. Don't worry, they are all perfectly plumb. 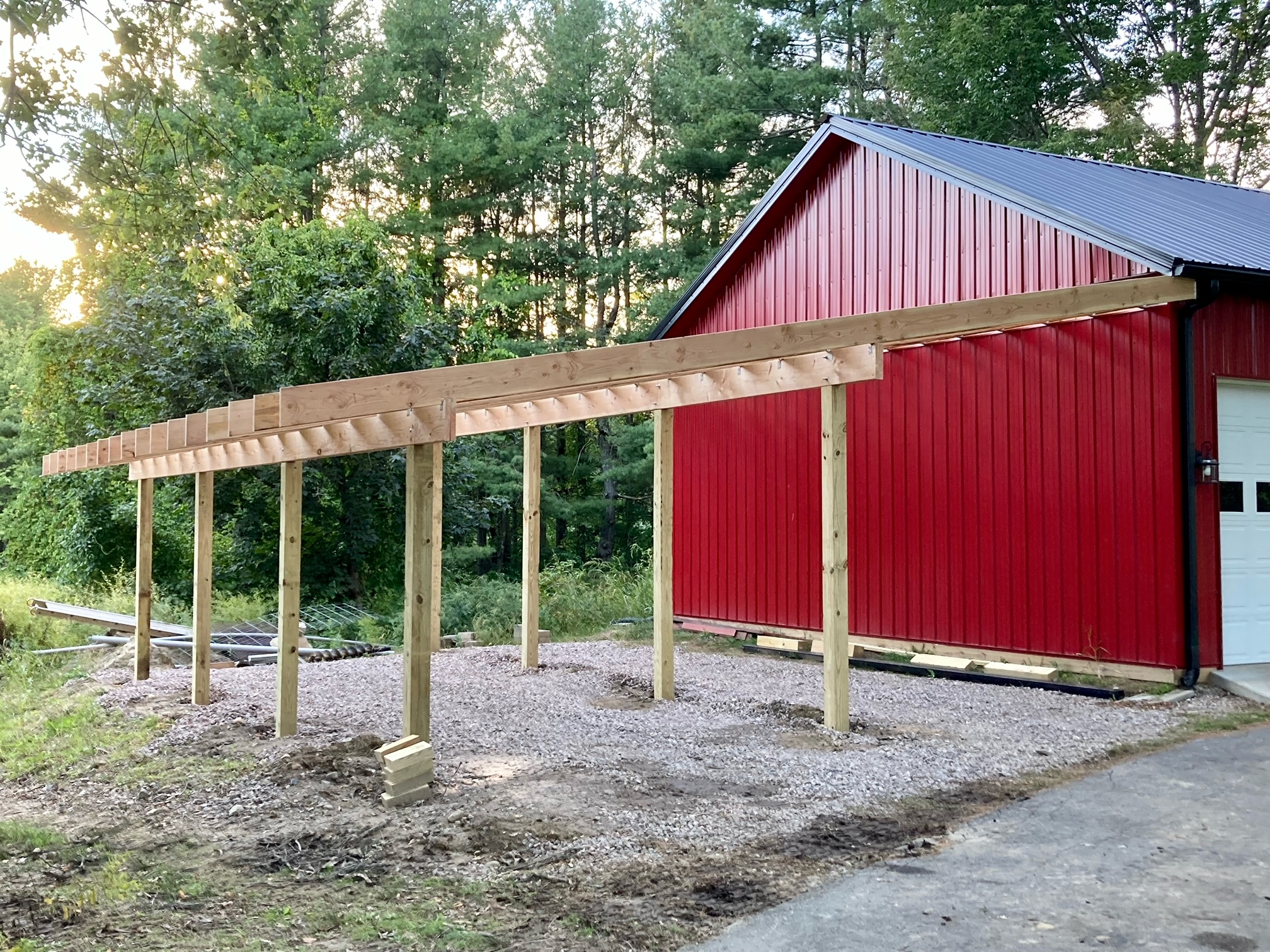 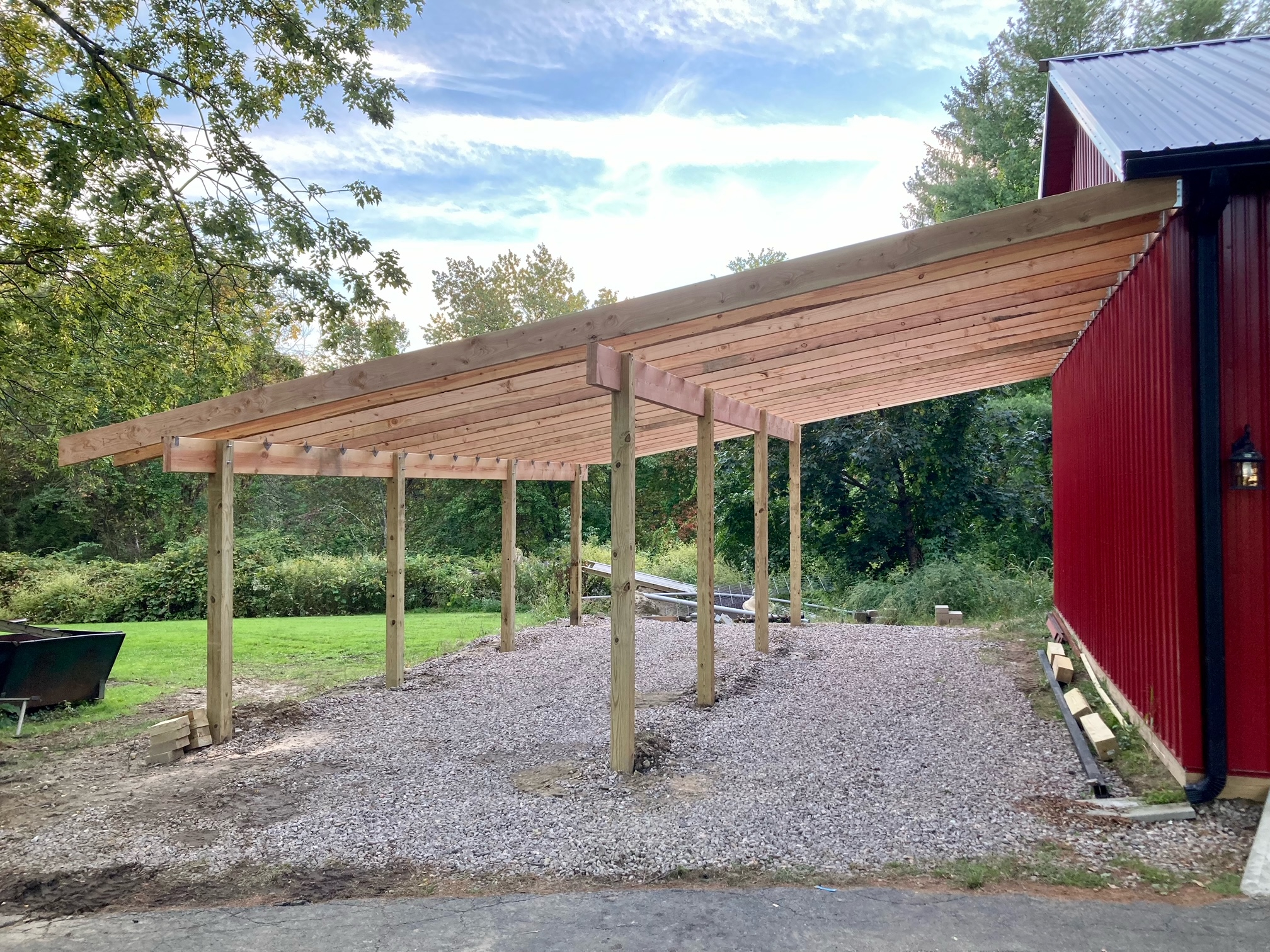 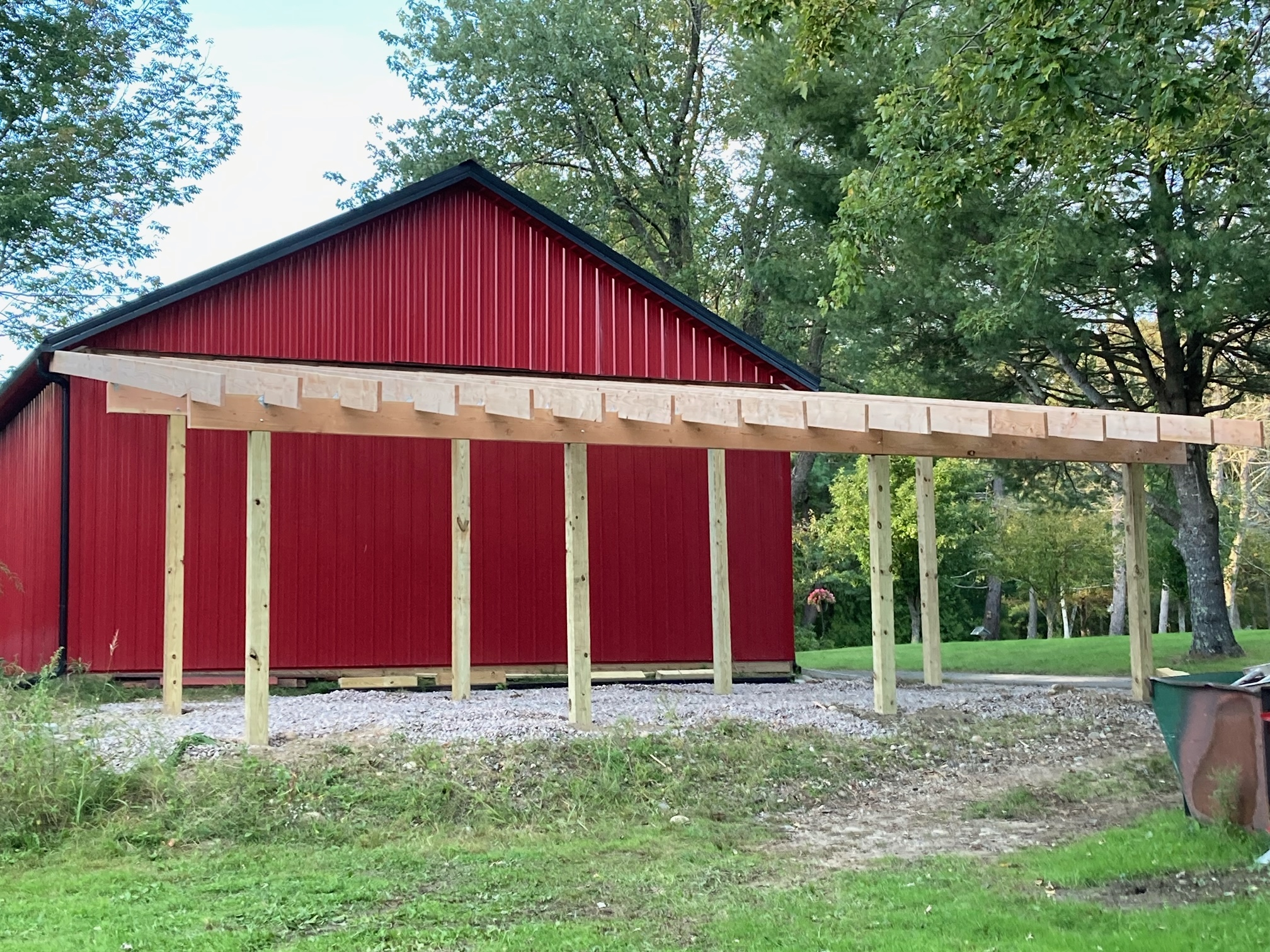 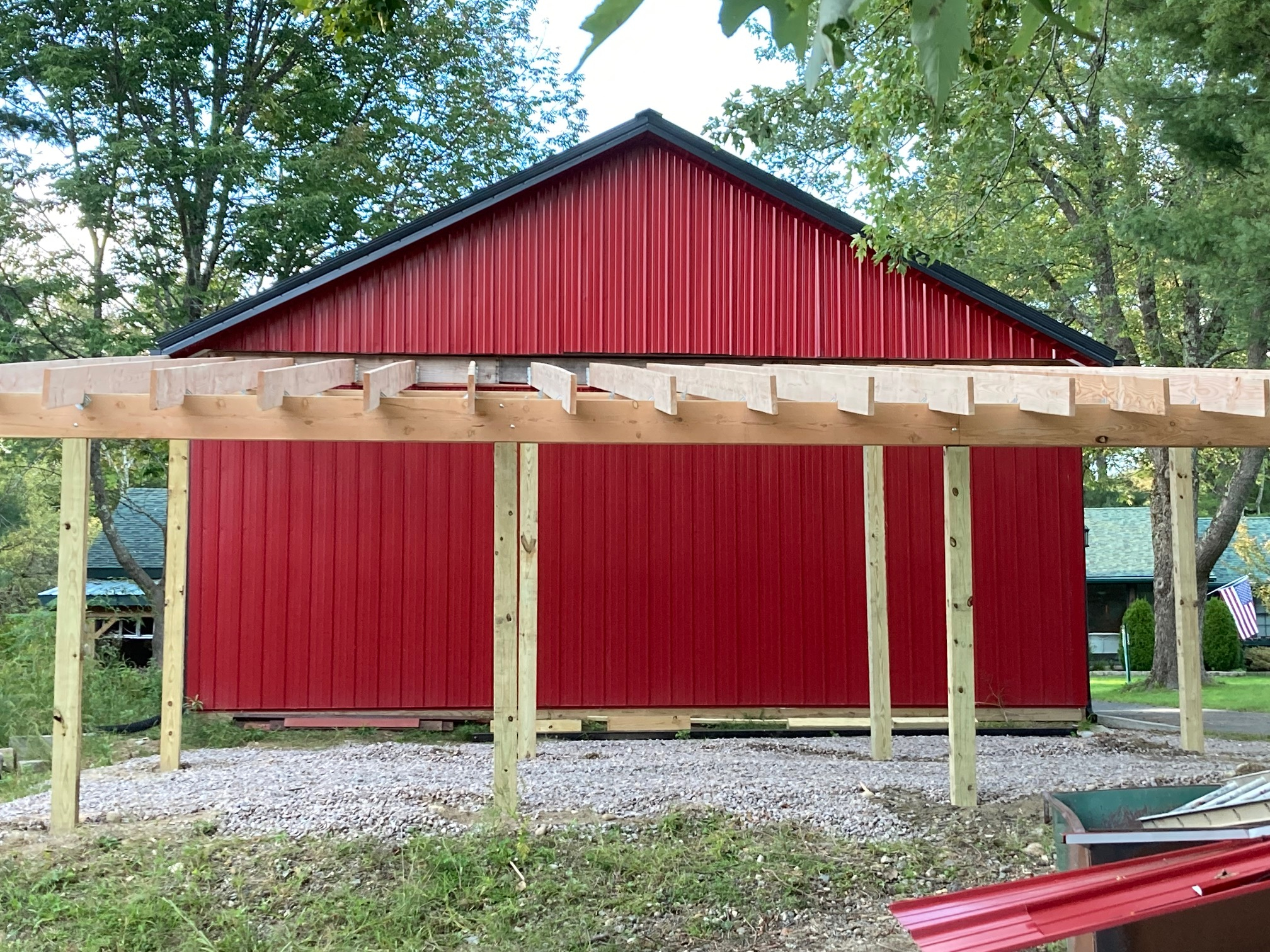 I'm impressed that your 3 point auger can dig so deep. Mine only goes down 3 feet.

Thanks Eddie. The barn was a kit from DIYPoleBarns.com, and I tried adding a lean to shed through them, but they only offered a single 12' wide lean to, and I knew I wanted mine to be 24' plus the extra long overhang for the firewood storage. So I focused on building the 30x40 barn kit and getting it done, and then add the covered parking on my own. I didn't want the parking to be indoors as the town taxes barns nicely. My 30x40 is on the tax roles at over $1000 a year. Incorporating the parking into a larger barn would have made the taxes $1750 or more a year. Too steep for my blood. Lean to shed are still taxed, but at a much lower rate than barns. So its a compromise between what I would love to build vs what is affordable to build over the long run.

The post hole digger is a Bush Hog model. It has a 42" auger, but you can actually insert the top of the auger into the hole a couple of inches to get down to 45". Clean it out with a manual post hole digger and we were good to go.
Sep 25, 2021 #8

You shocked me with having to pay taxes on a barn!!! I never heard of that before. I can have as many barns, as big as I want, and not pay anything more in taxes. People build barns to live in so they can avoid paying taxes on their homes!!!
Sep 26, 2021 #9

Cool, looks great! I added two lean-tos to my barn, one on a gable end like you're doing, and one on an eave wall (which I tied into the existing roof). I'd probably install more but I am running out of available walls to tack onto, due to existing doors!

I assume you already had some load bearing posts on that gable wall to support the ledger board? Reason I ask is that most pole barn designs don't put load bearing posts on the gable walls when roof trusses are used. There may be posts but they are there for lateral support or door framing only, and not needed to support main roof loads. So when I put in my gable end lean-to, I had to add new posts (sitting right against the outside of the barn wall) with footings to support the ledger and carry the new roof load. Had I planned this better originally, I would have put extra load bearing posts on the gable end of the barn to begin with. As it was, I only had a center post (for lateral support) and the two corner posts were already allocated for the primary roof load carried by the eave header beams.
You must log in or register to reply here.
Share:
Facebook Twitter Reddit Pinterest Tumblr WhatsApp Email Share Link