Rail roads and their tracks.

I have RR experience when I worked for about 5 different car repair shops over the years as a welder. (ak carmen) This thread is about anything associated with RR's.
Mar 21, 2020 #2

Train drivers are the world's best drivers, the way they can keep that whole train balanced on top of those little rails without falling off. :laughing:

I have a weird hobby of following live, dead, abandoned railroad grades across the country with Google Earth looking for signs of existing or long gone roundhouses. I have a couple thousand pinned on Google Earth. If I get much time off in the future, I'll compile them in a spreadsheet and share the locations.
Mar 21, 2020 #4 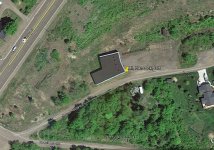 MossRoad said:
I have a weird hobby of following live, dead, abandoned railroad grades across the country with Google Earth looking for signs of existing or long gone roundhouses. I have a couple thousand pinned on Google Earth. If I get much time off in the future, I'll compile them in a spreadsheet and share the locations.
Click to expand...

Mine is dead or abandoned RR. It started many years ago with a tip of an abandoned RR grade over near Current River I explored in my truck with an old GF. Locals called it the tram road as in logging trams in the late 1800's but I later figured out this was a full size RR. I also like looking at maps and topo maps. The abandoned tunnels are like icing on the cake for me. Years ago I found one just following an old grade on my computer at home drinking a beer. That summer my dad went with me on my camping trip and found the old partially collapsed tunnel near Bannock pass ID/MT. This fed the old mining town of Gilmore ID. Many old grades and tunnels later I decided to see about getting a rail rider. A young guy who had his own fabrication business was interested in building one. It took way longer to build than he anticipated but he cranked out a fine product. He built two so there are currently only two of these in existence and I have one. His prototype is the other and he sold it. Me riding my railrider in Southeast MO
Mar 21, 2020 #7

Location
Somewhere, but not there....

Guess I'm kind of fascinated with rail stuff myself, but only steam. I have a couple working steam engines in the shop and my 'doorbell' outside the shop entrance is a triple chime steam whistle from a Baldwin Works steam locomotive with a Kahlenberg lanyard valve to actuate it. Pull that lanyard and everyone for a 1/2 mile around knows you did it.... your ears won't be happy though...:laughing:

Of course it's on compressed air and it take a bunch to blow it but I have over 40 CFM at 150 psi available. Great doorbell. Nice triple chime too. Everyone needs a steam whistle, especially a working one... Kahlenberg sells new whistles, everything from single to quad chime and all the actuation hardware too.
Mar 21, 2020 #8

We had lots more experience with railroads in days past, and I miss it now.

My Dad's oldest sister was married to a high ranking official in the Baltimore & Ohio Railroad. Unfortunately, he died of heart failure when I was about 3 years old. I inherited his gold watch and a number of papers that I later donated to the B&O Railroad museum. B&O Railroad Museum

My mother's older sister was married to a train engineer who was killed in a train wreck when I was pretty small. I remember going with him to the turntable in Oklahoma once.

My father-in-law retired from the railroad as a welder repairing damaged coal cars in Princeton, WV.

My paternal grandfather hauled mail between the Post Office and the train station (10 trains a day, 7 days a week) in Ardmore, OK, from 1943 until trains quit hauling mail. When I was a kid, I always liked going with him "to meet the train."

I worked 5 years for the Dallas Post Office in the Terminal Annex next to the train station, and sometimes had to go out to the train myself to send or receive extra valuable items.

Here is an old railway that has been turned into tour train.

Some friends of mine used to take restored maintenance cars up/down it for fun. They noted it was a little scary crossing Fontana Dam in an open door unit.
Mar 21, 2020 #10

Mom's Uncle Loyal worked on the Wabash after WW I. There are gandy dancers that become switchmen, and firemen who shovel coal for years while learning to operate a boiler. A railroad engineer was a competent Boilerman before he ever pulled a steam valve. Thus the term Engineer as operator.