I just came across this ad on Craigslist and thought you might enjoy seeing it. Comparing the quality of your work to what they posted pictures of in their advertisement is just amazing. Your edges are always perfect, and these guys don't seem to care, or even realize how bad their work looks.

I don't have words to describe the pond pictures.

Well Eddie, the ad you linked to was flagged, but they're not hard to find on CL. Spamming with loads of ads seems to be their best talent. lol

Glad you where able to find their ad. I don't know anything about them, but figured if somebody was willing to show pictures of such poor quality work, they where really clueless.


As for flagging ads, I know a lady that sells stuff on Craigslist for a living and she routinely flags all her competition. They also flag her all the time. If you talk to her, she will have her phone in her hand 100% of the time flagging others and re-posting her stuff. It's a game to her, and she seems to really enjoy it. Not sure if that's what happened to that ad, or not.
Aug 3, 2016 / RDrancher's Photo Thread #924
G

RDrancher said:
Placed and wheel-roll compacted 48 tons of roadbase and topped it with 24 tons of 3/4" minus crushed limestone. The turnaround area also had trenches through it, so I fixed them and spread the leftover stone.

You'll notice the customer's tractor sitting next to the shed in the first photos. I needed it moved, but he said it wouldn't start. I traced it down to the neutral safety switch. A little tweaking of the mount and it fired right up.
Click to expand...

This thread is terrible.

It's the end of the day, and I'm tired. I sit down, start browsing the posts and pics and now want to go climb on the tractor and grade something, but its too dark to see anything and nobody delivers rock at 10PM. ;-)

Tomorrow I will wake up, but have so much other stuff to do. Thank you for the posts, it's pretty inspirational to see the before and after pics.

greenmojo said:
This thread is terrible.

It's the end of the day, and I'm tired. I sit down, start browsing the posts and pics and now want to go climb on the tractor and grade something, but its too dark to see anything and nobody delivers rock at 10PM. ;-)

Tomorrow I will wake up, but have so much other stuff to do. Thank you for the posts, it's pretty inspirational to see the before and after pics.

I've been slacking on job pics so here's a few. This driveway was obviously neglected, but it was also topped with a smooth river rock that moved all over the place. 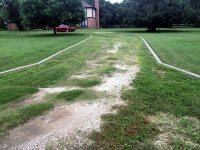 At least the driveway had a nice layer of roadbase beneath the grass and topping rock. This is the first and only job I've used my rake on. But it worked pretty good. :thumbsup: 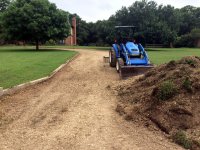 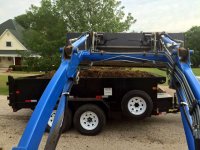 Sometimes waiting is the hardest part. 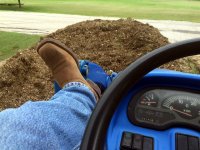 Much nicer with a nice topping of crushed limestone. 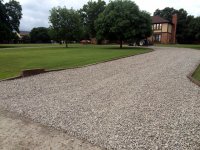 I had an opportunity to try out a Danuser Intimidator on a few acres of mesquite. I failed to take enough pics, but the size ranged from itty bitty up to 8" or so with multi trunks. Most of the 2-4" mesquite had been cut at some time with a chainsaw so even those tap roots were large and pretty stubborn. The Intimidator is a pretty cool attachment. You can pinch, squeeze, rock and dig like a stump bucket too. I was impressed! 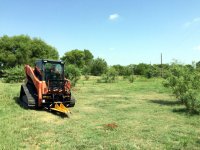 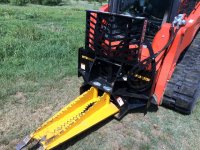 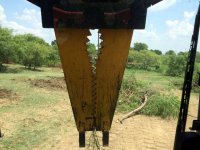 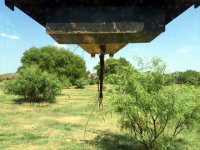 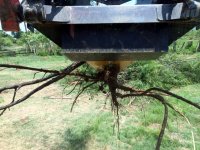 I felt pretty bad for the new landowner who had just moved here from the city. Someone talked him into and then charged him to treat the algae in the pond the day before. When I started in the morning I noticed a couple nice size bass floating near the shore. By the end of the day there were 50 or more dead fish. :thumbdown: 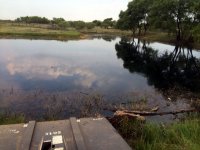 One of the best threads on TBN. Hope we can see more soon!

Thanks guys! We've been on and off busy this year, but never really had the board stacked up for weeks ahead. Kinda weird. Seems like everyone and his brother has a skid or ctl around here these days. Pretty shoddy work too...that'll weed 'em out in time.

One of the more interesting projects this past summer was a new 52-space RV park for the same folks we did a park expansion for a couple of years ago. I bought a 10-wheeler dump before we started the job since we had so many dirt loads to haul to fill up an old pond on the property. While my son spread over 75 semi loads of road base with our machine, I graded ahead of him and loaded the dump with topsoil using a rented SVL95. The truck really paid for itself by hauling more than 100 loads onsite in a week or so. The truck is a 2000 Western Star with a rebuilt 450hp Cummins N14 and 13 speed. I haven't done much with it since except for hauling a few loads locally and working on getting it up to spec. Bought a tag trailer to haul behind it too. We're pretty much done getting everything ready on the truck and trailer except for mounting up a set of freshly polished Alcoas and new tires on the rear of the dump. With a purple dump truck, yellow trailer, a blue tractor and orange ctl...I either need to get some things painted or rename the company "Rainbow Warriors" lol. That's not going to work for me, so we'll get the truck and trailer painted soon and have it all going before Spring. Here's "Barney" hauling his first load. 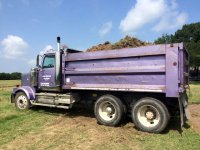 The new to me pintle hitch tag. 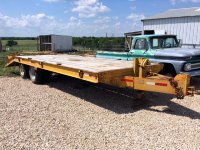 And our rock soild SVL-90 sitting right at 990 hrs with ZERO problems to date. 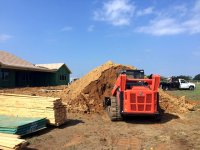