First time that I'm changing out the nozzle on my, fuel oil furnace.

About to put new nozzle in and I notice that you can hear a rattle (like a bearing ball) in the nozzle adaptor, that the nozzle screws into, when you tilt the fuel line assembly.

Is this normal? Is there a ball in there that acts like a anti-siphon or something? (I didn't give it the Monica test)

If so, another problem is sometimes when I tilt it, I don't hear the rattle, almost like it's stuck, until I give it a tap and then it I can hear it again. Until it gets stuck again. When stuck, it seems I can still blow through it.

I found this picture which is almost identical to my assembly. I asking about the brass adaptor fitting on the left end that the (unshown) nozzle would screw into.
Thanks 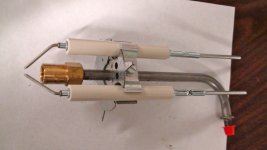 I have a similar if not the same type nozzle for my furnaces. When the nozzle is removed as your picture shows nothing rattles if I shake it and air (or fuel) will blow through easily. Inside the nozzle tip there are parts that will rattle if they come unscrewed. Not sure if there is a check ball in there or not. I hear no rattle on mine with the nozzle removed. Once a year I change the nozzle tip. Then take the old one apart and clean it in lacquer thinner or similar solvent then reassemble and put back on the shelf for next year. I always keep a couple spare tips around as my filter doesn't seem to catch all it should.

I thought wear was a factor in replacing nozzles. And shouldn't a nozzle replacement go in conjunction with a cleaning and a general tune up? To get max. efficiency you need to adjust the airflow after the new nozzle is in place.
Nov 18, 2017 #4
OP

The rattle is not from the nozzles.
I'm getting a rattle from inside the nozzle adaptor, the fitting the nozzle screws onto. I get this after the nozzle has been removed.
Nov 18, 2017 #5
OP

Further internet searching says that in the nozzle line is a "vent plug"?

Not sure what that is, or how it operates. Or if it should rattle?
I still wonder if it is operating correctly?
Whatever I hear moving seems to "stick" often, but not every time, and I call draw/blow air through no matter position?
Nov 18, 2017 #6

I have a spare unit like the pic in the first post. I just removed the brass piece from the line and found nothing inside and air blows through both ways. Delavan calls it an adaptrap, this site calls it a nozzle adapter. So not sure what the rattle in yours is coming from.
1/8 oil nozzle adapter, 1 3/8" long, Delavan 28737-1

Well, I really scooched the pooch! I tried to take off the adaptor from the fuel line tube and instead of unthreading, it twisted/sheared the fuel line tube right off. Broken. Probably a rookie move. But something randomly sticking didn't seem right either, so I figured why not keep taking it apart? Probably should of just soaked it in cleaner instead.

So now I'm really at a loss, cause I don't know exactly what is inside this tube that needs to be replaced. Adaptor also needs replacement because it still has the broken fuel lines threads in it.
Last edited: Nov 18, 2017
Nov 18, 2017 #8

Sorry to hear you twisted the line off. Now you'll have to go to your local heating / furnace supply house for a replacement. Mine unscrewed with a pipe wrench with a cloth wrapped around the tube. Guess I got lucky. I did not see anything inside the tube itself once the brass adapter was removed. The adapter I could not see through. It has a couple holes around the outer edge for fuel to get through what looked like a baffle plate but no moving parts inside.
Nov 18, 2017 #9
OP

Thanks for all the effort!
Yes, similar here. I can see a baffle with small fuel hole in the adaptor. And also when I look into the tube, it looks like I see another baffle inside the tube. I'll have to see if the rattle is gone. Maybe something was in between "baffles"?
Nov 18, 2017 #10
OP

Follow up:
Not a "baffle" I was seeing in the tube, but the "vent plug".
The "vent plug" in the tube is basically a 6" metal rod. That's it. Not sure how it actually works or what it does.
It definitely is the source of the "rattle". Lesson learned!
I think it gets "stuck" sometimes in the bend of the tube, and then falls back and is stopped at the baffle in the adapter.
Last edited: Nov 18, 2017
You must log in or register to reply here.
Share:
Facebook Twitter Reddit Pinterest Tumblr WhatsApp Email Share Link