My wife, knowing about my tractor forum interests, and watching me plow some snow today (first time this winter!) sent me this link:

How to Clear a Path Through 60 Feet of Snow, Japanese Style | Atlas Obscura

I grabbed some photos from the link... too bad there wasn't a video! 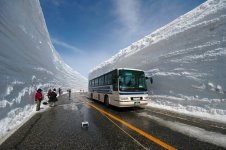 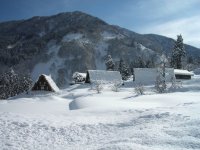 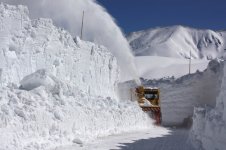 That scares me. If we reached that tipping point (and it happens quickly) in an Ice Age Event, we would be totally screwed! Nature really does have the ability to overwhelm us and our limited (feeble) resources.
Mar 20, 2017 #6
L

Industrial Toys said:
That scares me. If we reached that tipping point (and it happens quickly) in an Ice Age Event, we would be totally screwed! Nature really does have the ability to overwhelm us and our limited (feeble) resources.
Click to expand...

That always reminds me of the deep snow pack they have to clear to open the Going To The Sun Road in Glacier National Park.
It get that deep in places in Scotland also
Mar 20, 2017 #7

As I was growing up in SW Colorado, we had some really big snows.

Wolf Creek Pass is built on a steep mountain, and it is a cliff on both sides. One up, one down.

In the winter, the snowbank was so high, that it was similar to those pictures, although not to that degree. I remember that it was like a tunnel though. So probably around 10ft at the cliff face shoulder.

Been across wolf creek pass, in the summer. Love that hairpin turn on the west slope. Beautiful area.
Mar 21, 2017 #9
S

Every time I click a link on the forum it comes up in a new window with about:blank in the address bar

I was stationed at Misawa Air Base in Japan twice.

Misawa is at the extreme Northern tip of the main island (Honshu) in Aomori Prefecture. If you traveled due West across the Sea of Japan, you'd hit the Northern border of North Korea.