RjCorazza said:
I have an HLA 2000 series ssqa blade that I like. It痴 built like a tank, and has 5 degree lateral oscillation.
I wouldn稚 want to use it on gravel though.
Click to expand...

Corazza - would you not use the HLA on gravel or are you saying you wouldn't want any blade on gravel? Either way, why?

That home built of Paul's is beautiful work. Makes me want to start scouring craigslist for an orphaned blade. Didn't get a clear view of how much gusseting was done where the blade was attached at the plate. Definitely did it right by sliding it back on the mount.
Oct 11, 2018 #12

MooseOnTheLoose said:
Corazza - would you not use the HLA on gravel or are you saying you wouldn't want any blade on gravel? Either way, why?

That home built of Paul's is beautiful work. Makes me want to start scouring craigslist for an orphaned blade. Didn't get a clear view of how much gusseting was done where the blade was attached at the plate. Definitely did it right by sliding it back on the mount.
Click to expand...

I have limited experience on gravel. I used a rear blade for several years before paving my 500’ driveway, and did fine with it.
I don’t live in an area where you would build a base over gravel, then plow down to the base for most of the winter. A non-floating ssqa blade would not be my first choice on loose gravel.

The ssqa blade I have now only floats with the loader arms, so it’s very easy to dig into soft material. I don’t float the loader arms when plowing pavement and feather the loader arms to keep just the weight of the blade itself on the pavement (there is a little bit of vertical slop in the center pin and/or mount).
Oct 13, 2018 #13
F

I got my 8' Snow Dawg in Denver, some place off Santa Fe. Pretty decent price, I want to say $3k or so. It is a typical SSQA blade, so doesnt have float. I was planning on using it & seeing if I'd need to reengineer float into the SSQA frame & the blade frame. It's been 2 winters now & I havent been motivated enough to try & figure out how I'd do it, much less do it. The past 2 winters have been pretty dry though. The small truck plow I built for my old L3200 had vertical float & 15-20 degrees of rotational float. So I know the value of having or not having it. All things considered I prefer float, but not enough to rebuild for it... yet.

I got it for the 2' forecast around Thanksgiving 2 years ago. Spent a good evening assembling it in 5-10 degree weather (need a torpedo heater to get the plastic bit ontop to expand so the holes line up). They only had a 8' in stock instead of the 7 I wanted. Again, I was figuring I could cut 6" off either side if needed. It might be a bit much for my L4060 in heavy snow, but hasn't been a problem yet. Oh, and after freezing my *** off getting it assembled, we only got 3".

All things considered, get one that's more compact. The farther out the plow is in front, the worse steering & stuff is.

Just a few opinions & experiences from down here in Parker. 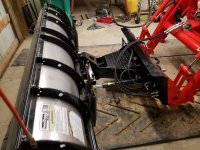 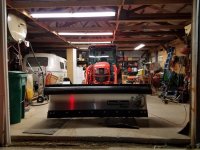 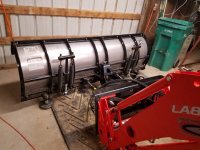 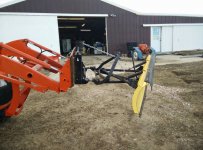 I got my SSQA blade last fall and have had one winter to get used to it. When just doing my road it is so much easier than the back blade it gets trickier in my driveway and parking areas as the are sloped and meet at compound angles. That takes a little more finesse on the controls then just floating it down the road. In combination with a snowblower it makes the snow seem like so much less work. 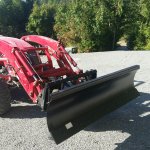 Seven foot seems too small when angled. I use a couple of eights to do my parking lot. Wider would be nicer, but then they are a hassle to park indoors.
Oct 16, 2018 #16
OP
M

Fallon - stainless steel looks interesting on that snow dogg. What made you decide on that one (other than a panic no-show-snow :laughing: - I've learned that the more hype the less snow around here).

I can see where the float on the plow instead of the boom is better just for less "floating" weight. Still love to hear from anyone that might have bought the Land Pride STB15.

I think the 8' sounds like the ticket considering width loss at angle.

Just need to get rid of the ol' L3800 so I have some seed money for all the accessories. Took a pick with them sitting together... L is sitting forward more and with the canopy you don't appreciate the size difference! 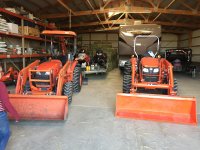 It was a better price than other new ones I could find & I like the idea of the stainless not rusting. It was actually competitive with finding a nicer used truck plow in good shape. Used plows around here seem to be nearly new pricing (often unrelated to condition), and/or the plow is beat to heck.

There are some cheap import blades around that are really compact. They have 1 double acting cylinder for single instead of 2 single acting. It would be harder to retrofit blade float into that style & they are built a lot lighter. So I stuck with a truck style blade & frame with a SSQA mount.
Jul 24, 2019 #18

Who makes a SSQA that floats? That seems like a good solution, along with maybe some pipe/horse mat along the edge for the gravel driveways. I have two driveways, and two 60ish car parking lots to clear that are gravel, looking for good solutions for early and late winter when the blower won't be needed.
Jul 24, 2019 #19

I converted a meyer truck front blade to fit SSQA. As mentioned earlier, the float function bears a lot of weight on the blade. Need large shoes.

I later added 3pt brackets and now use it on the rear of my 3o10. Floats a lot better but is a pain having to push backwards.

I think the answer is to build the float function into the mount as a Meyer blade is originally.
Jul 24, 2019 #20
F

From Jenkins Steel, I got an 8 ft SSQA snowplow. Basically a Bobcat clone
All pivots are greasable with a center pivot so the blade will oscillate.
900 lbs and $2300 delivered, it is a quality setup. 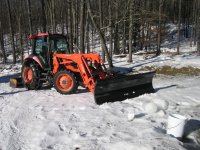