A few months ago I bought a Yanmar YM2310 tractor. It is the most modern tractor I own. It has the Bulldog 285 FEL on it and the tractor came with clamp on forks. I already have a forklift and so am used to forks that stay where I put them. The clamp on forks tend to move, to swivel, so that they are no longer perpendicular to the leading edge of the bucket. This is a problem. The bucket is fairly lightweight so I'm gonna weld on a couple of 3/16 inch thick stiffening plates in the general area where the forks go. This way the forks can be adjusted width wise. But the swiveling problem will still exist. I am considering welding some lengths of 1/2 inch thick square steel stock to the stiffening plates to trap the forks in various positions. This will limit the fork positions to just a few set widths but I don't think that will matter if the positions are chosen carefully with a little forethought. But then there will be 1/2 inch thick strips of steel welded to the bottom of the bucket which may interfere with other bucket operations. After all, I have never seen a bucket with strips welded to it like I described. So, anybody got any better ideas? At this time in my life I am having lots of emotional stress. This is affecting my thinking. Stuff that would normally be obvious to me is not. I need some distractions to help relax my mind. Getting the forks securely on my tractor will help.
Thanks,
Eric
Sep 15, 2021 #2

You don't have one of these bars? 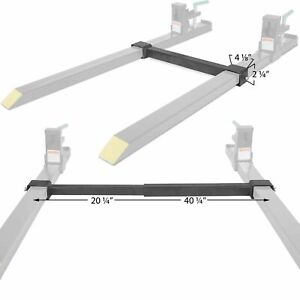 The forks should have a point to hook up a stabilizer/support chain to the bucket. they also sell a bar that goes between the two forks to keep them from twisting apart.
Sep 15, 2021 #5

I have a clamp on set like this. All I can say is they suck! Just a tad better than nothing if you need them. I usually just chain whatever I need to move to my bucket hooks and pick it up from above.

How about welding on some side pieces on the forks instead of the bucket. In other words, pieces running parallel to the bucket front edge, right next to that edge.
Sep 15, 2021 #7

I’ve used the clamp on forks. Like others have said, they’re better than nothing.
With me, it was just a matter of when I’d over do it and the leverage of the forks bends the bucket edge. It now has a smiley face. ..and some dents where the clamp on bolts touch.
Also be prepared with a BIG lever to undo those clamp on bolts when you they bend. Fun fun!

I also used the stabilizer bar to keep the forks parallel. Again, it’s not 100% effective, but better than nothing. You’ll discover it’s hard to tighten a metal bolt onto a metal fork and have it stay in place. Eventually when you dump the forks vertically, the stabilizer bar slides right off the forks. I found that putting a piece of wood or rubber between the bolts and the fork acts like a good “washer”.

I eventually bought a “real” set of forks that mount on their own quick connect frame. I still use the stabilizer bar, as I do a lot of non-pallet “poking around” under things with them. I have the stabilizer bar chained to the fork frame now so it can’t slide off.
Sep 15, 2021 #8
OP
E

No, I do not have one of the bars pictured. The forks you show look exactly like mine. And it also looks like I need to make one of those bars.
Thanks,
Eric
Sep 15, 2021 #9

look at this product on amazon, there is a guy who made a turnbuckle setup with chains in the reviews

A lot depends on how often and for what purpose you need to use the forks.
I've got a set of the clamp-ons for each of my two tractors. I rarely need them, but when I do they come in real handy.
I've used a 2x4 with flat-U-bolts for the rare occasion when I didn't have a stabilizer bar handy.
You must log in or register to reply here.