Every now and then a story makes the news about some guy blowing up the house, putting his greasy clothes in the washing machine, with gasoline!

I had a MS230 and never had this problem but it was stolen from me. It's replacement was a MS251 and I've noticed recently it has the pressure in the gas tank problem.
The saw rides in the back of the truck when going to my property which is about a 600' elevation gain over a 2 hour+ drive. It often resembles the release of a beer bottle. That saw has been super erratic lately and then one day it will run fine. I was starting to wonder if there is a vent plugged. It is interesting to find this is not some weird phenomena with my saw. One time is sprayed a few drops out at me so now I release slowly and have my gloved hand covering it.
Jun 12, 2019 #24
E

Diggin It said:
I was going to object to the low intelligence thing, but opening a fuel container with hot embers around?
Click to expand...

If you're a sawyer on a fire crew working in a burned area ("mopping up" a fire) there's often nowhere near by where there aren't embers. I've seen those guys cut down snags that are still burning. I'm glad I didn't do that when I was a fire fighter. It's super dangerous even without fuel geysers.

I expect that they'd refill hot saws that still had fuel in them fairly often. You don't want to run out of fuel with a tree 90% cut down.

This isn't a problem for most of us amateurs. We're not working in a fire or under the same kind of time pressure.

Stihl should see if they can modify the design to let the fuel vapor out more gradually.

So far I've not had a fuel geyser on my flippy cap Stihls. But after reading the USFS warning last year I take care to open mine gradually and keep my face away if I'm refueling a hot saw. Other than that potential problem I like the caps, especially how they positively lock in the closed position. I've had a screw fuel cap come loose and drench me with an entire tank of fuel. Yea it was my fault but that didn't make my private parts feel any better.
Jun 13, 2019 #25

My truck gas cap says to release slowly to prevent fuel spray...I'm sure the idiot to not ratio is higher in vehicles than chainsaw users, but Stihl may be forced to cover their asses for the 1%.
Jun 13, 2019 #26

I have never run into this with several Stihls. Interesting. May just be my cutting habits.

BTW, if you want to make this a controversy you have to call them "flippy caps". Now we'll fit in with all the other google search results.
Jun 13, 2019 #28

My old Stihl 025 has the threaded cap. The cap is not stripped. I hand tighten it and occasionally have to use a screwdriver to get it open. NO problems. BTW the saw was bought in 1996 and except for a new carb, fuel line and chains/bars it's still going strong.

My newer Farm Boss has the flippy cap. I don't like it. I guess it's me but I sometimes have trouble getting it to close properly. And once it lost all the fuel, another time most of the oil. Again, that was me not getting it latched right and starting to work. But the screw cap was not a problem that needed fixing.

Overall I still like Stihl products. Two saws, one string trimmer and one backpack blower (also from about 1996-7).

There is a aftermarket flippy cap replacement for those over designed stihl caps. Lot of folks really like them better. Shown on this 440 I set a guy up with. 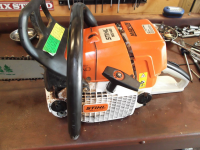 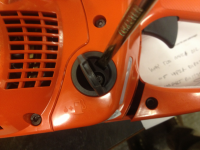 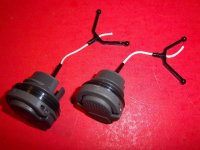 xyz123 said:
There is a aftermarket flippy cap replacement for those over designed stihl caps. Lot of folks really like them better. Shown on this 440 I set a guy up with.