This Bank is KILLING Me….

I tried a diy redneck boom mower on the FEL for around my pond, but I kept killing the mower. I experimented with ways of adjusting the angle of attack by securing the mower deck to beam in a much more sturdy configuration. I think I'll cross the securing chains, so that adjusting the angle of the bucket changes the left to right tilt of the mower, not the front to back. I have an old TV antenna tower that I plan on using (instead of the 2x6 beam shown below).

I was thinking about puting a hydraluic motor on it. At the time I found a hydraulic motor at Surplus Center for about $100 that would just do (I'm thinking it was <3 hp, but the right cfm and rpm). Once I buy hoses and fittings, I figure the project will cost about $300(excluding medical bills). Any thoughts?

Last time I tried to use my mower, the carb was bad and it wouldn't start, so I need to change the motor anyway. 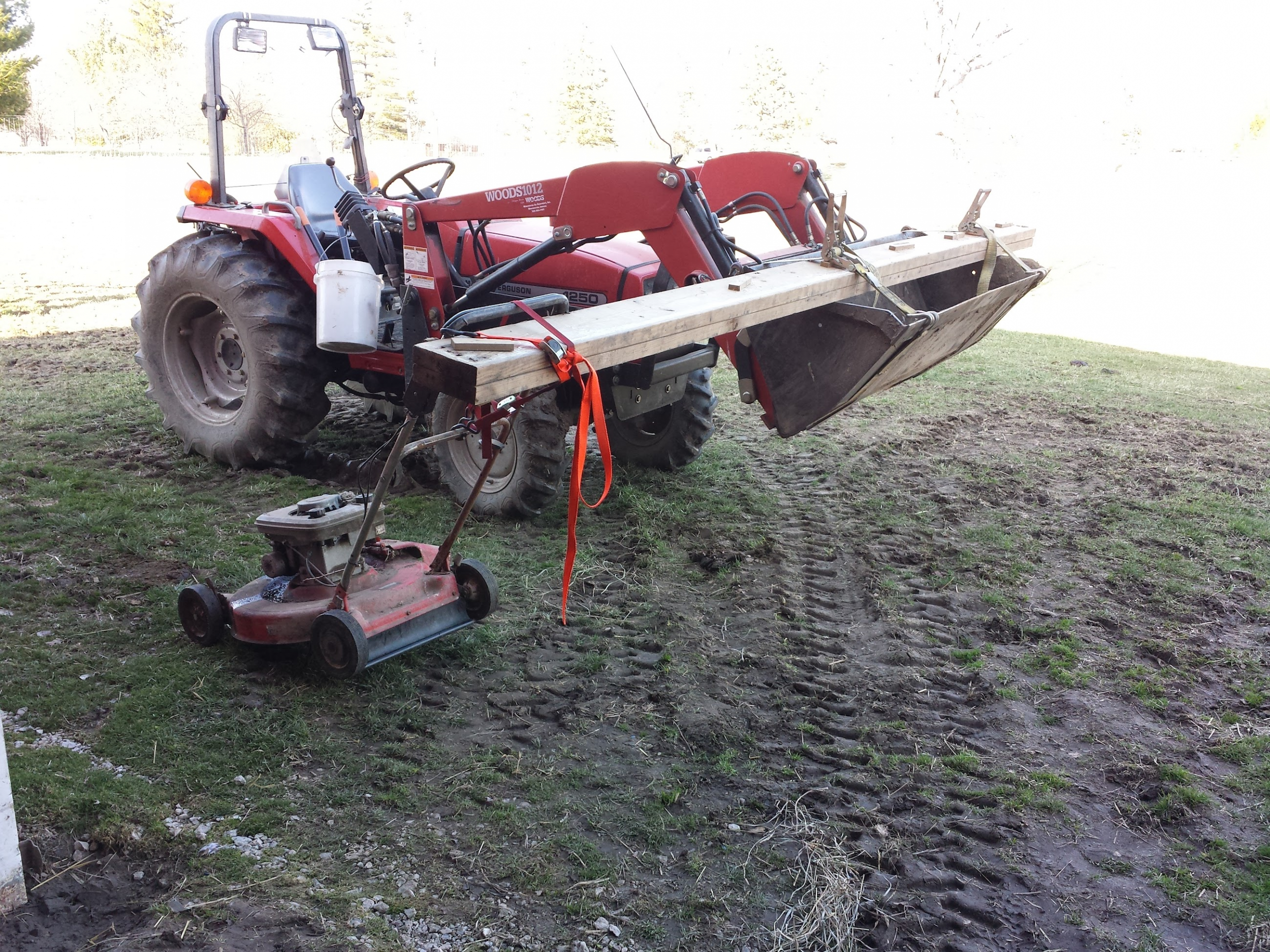 Mountaineer67 said:
This hill is killing me. A little steeper than it looks. I have a JD 1023
Click to expand...

Depending on how much "modify / fabricate" abilities you have, ideas I might think of:

1) Create wheel spacers so set the tires out wider than factory? County mowers have some really wide settings.
2) Use a long pole or beam of some sort that is connected to the tractor on the "uphill" side with a weight on the end to create extra stability. Don't insist that the wife sits on the end.
3) Require a second person to assist. One drives the tractor along (parallel to) the top of the hill with a chain or rope is attached between that any any type of push/self-propelled mower that traverses the hill with (or without) a person guiding it. Safeest method would be a self-propelled that the second person who "locks" it into drive mode and watches it go from a distance.
Jul 15, 2022 / This Bank is KILLING Me…. #33
H

I agree with the others that say let it grow. But I also know that where I am, if I did that, the town would mow it up to about 10 feet of it it 3 times a summer no matter what was growing there with the exception of trees.
Jul 15, 2022 / This Bank is KILLING Me…. #34
C

Get a little bigger tractor and a fox cross ditch flail

This hill is killing me. A little steeper than it looks. I have a JD 1023 - not enough juice for a boom mower or a flail. You can see I have easy access from the top. Been weedeating this mess for five years.

What if I took tow behind mower like you use with an ATV - hitched it to the back of the 1023 - and just backed up to the edge letting the mower drop down over the bank? Put a bit longer extension on it if I needed to. Then work my way across up and down. Is this a really smart idea or a really stupid one? I’ve been known to have both kinds.
Click to expand...

Mow straight down in 4 wheel drive and back straight up your next pass. Takes a little extra time but should not be any trouble.
Jul 15, 2022 / This Bank is KILLING Me…. #36
V

Before we were married, my wife had a yard service that used a zero turn ride on for most of the lawn and a hydrostatic walk behind for her steep hill, which may or may not be as steep as yours but seems many times wider. I bought a used one with a Velke/sulky (less than she paid the service annually) for the whole acre lot and alternately cut the hill at an angle as described previously. The mower works fine but the Velke would slide on the steepest hill if I cut horizontally so I just hung it up on the hook the prior owner installed when mowing there. Walking slightly downhill of the mower allows you to be more upright.
A self-propelled push mower works, but this is wider, faster, and much more stable.
Our current home is on the side of a hill with a third acre of 150 feet of up and down mowing a 30 percent slope. At the bottom is a 3 foot drop off (flood plain change) and heavy woods. Riding anything that could fail would be risky, even my tractor or ride on with seat belts and roll over protection.
BTW, I am handicapped, have balance issues, and need at least one cane to walk safely.
The perennial flowers sound great, except they don't last long. Ground covers seem to take forever to spread and still have weeds growing within, often unsightly large ones. Wildflowers are often annuals and have the same issues.
Is there somewhere you can rent a walk behind to try one out? It looks like you might get by mowing the whole bank horizontally in two or three passes. Up and down on that small a slope would take many times longer.
Jul 16, 2022 / This Bank is KILLING Me…. #37
M

Here is a solution to hilly mowing for someone with unlimited cash. $50K for used but it will do the job on 60 degree slopes per the listing.

Time to buy or rent a few goats and some fencing.

MossRoad - post#16 has the very best answer. And it looks good too. Otherwise - I'd plant Bachelor Buttons. Same idea as Moss - just a different type flower.

In my township that would be road easement and the township's responsibility to maintain. They might not be happy with me if I ran a dozer to re-grade their property. Check with your local roads person, maybe they will re-grade things for you gratis. Say you want to be able to maintain it for them.
You must log in or register to reply here.
Share:
Facebook Twitter Reddit Pinterest Tumblr WhatsApp Email Share Link