Rear Blade Tufline GB4 Rear Blade - anyone own one / opinions??

I'm going to be looking at a used Tufline GB 8 foot rear blade possibly this weekend & was wondering if anyone had one of their unit or had an opinion on them? I don't have any experience with the brand but it seems they have been around since 1958, so just looking for some info... Tufline website

The one I'm going to look at is an older 8 foot GB4 with manual angle, manual tilt and hydraulic offset adjustments but looks to be in really god shape. Would be using it on our NH TC40D... any thoughts?

dlctcg said:
I'm going to be looking at a used Tufline GB 8 foot rear blade possibly this weekend & was wondering if anyone had one of their unit or had an opinion on them? I don't have any experience with the brand but it seems they have been around since 1958, so just looking for some info... Tufline website

The one I'm going to look at is an older 8 foot GB4 with manual angle, manual tilt and hydraulic offset adjustments but looks to be in really god shape. Would be using it on our NH TC40D... any thoughts?

I think it's a big blade for your size tractor.
We live in the same area and 8" of wet snow will stop my tractor cold with the 6 ft rear blade it has.
You can always cut this one down if it becomes bothersome because it seems like a sweet acquisition otherwise..
Dec 8, 2021 / Tufline GB4 Rear Blade - anyone own one / opinions?? #3
OP
D

@arrow - Thanks... I really doubt we will use it for snow we have a truck with a plow. I think we would use it mostly for driveway gravel & ditch maintenance which is where the tilt & offset would be used, would also use it to spread dress the driveway gravel prior to using the land plane.

I was wondering if it would be to big also... I think it weighs just over 650lbs which should be ok (even a good thing) but as you mentioned & 8ft blade is going to pull a lot of material.
The TC40D does have foam loaded front & rear tires & is just under 70 inches wide with the rims set to the inside position (which is where they are) & around 84 inches wide with the wheels set to the widest position. So I think I would want at least a 7ft (84") blade but I wasn't even sure that a 7ft blade would cover the tractor width with the blade angled.

I never even thought about cutting it down, that could be an option if needed. Anyway it is in to good of shape for me not to at least go look at it in person... paint is faded & some scratches but not beat-up & looks to be pretty well built. I just never dealt with the brand before.
Dec 8, 2021 / Tufline GB4 Rear Blade - anyone own one / opinions?? #4

I have a 7'er. I bought it used and don't know the model no. Sounds like yours but mine is manual offset. It is a rugged and pretty heavy blade. I run it on a 56 hp tractor. I agree with arrow that it would be a lot of blade for grading purposes with your tractor. 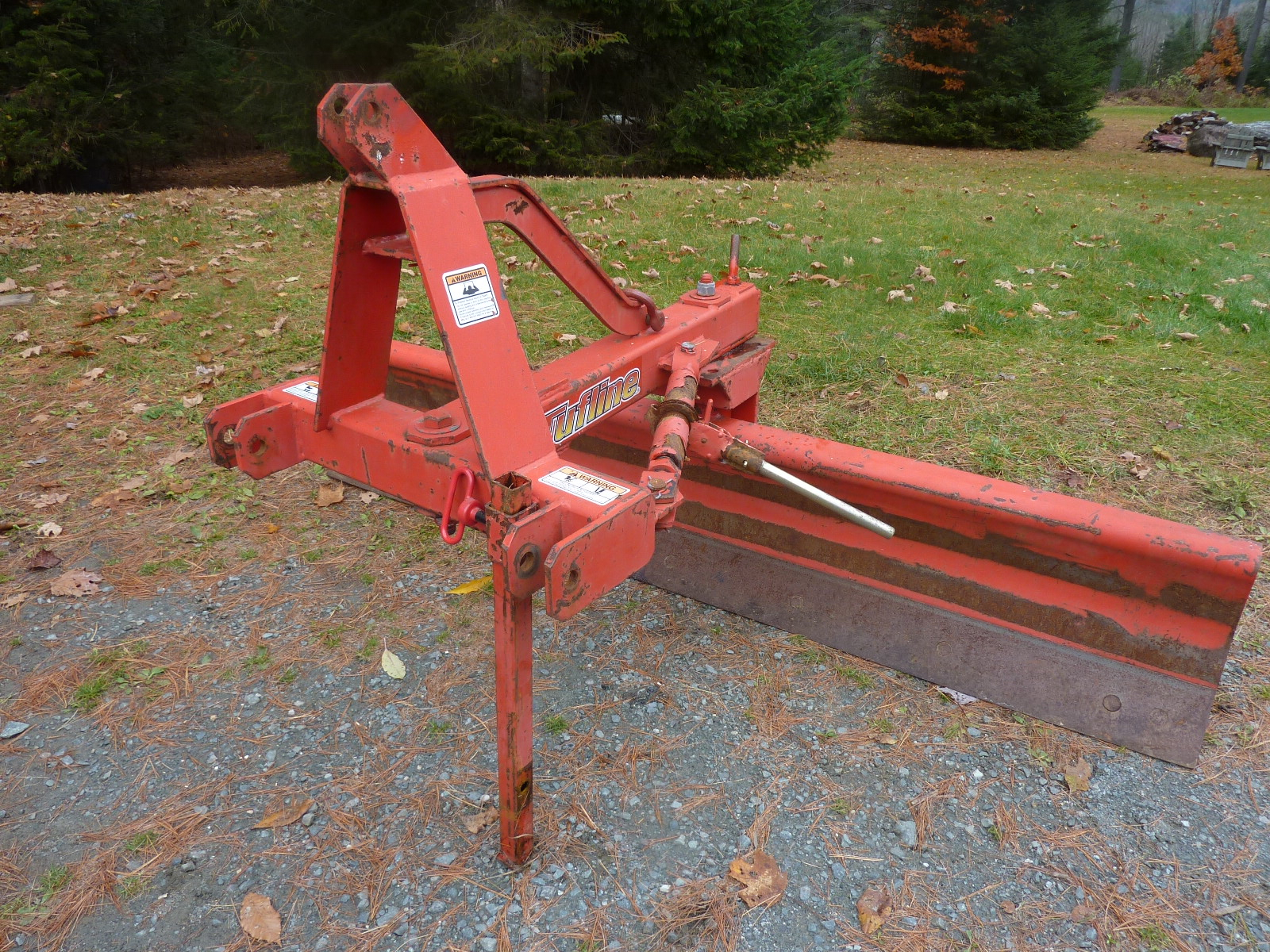 @Gordon Gould - Thanks for you real world experience... I'm glad to hear it is a quality product... you guys are talking me out of it (unless they give it to me for a ridiculous price)... but seriously I appreciate both of your input on this...

I had committed to looking at it this weekend... but may cancel going based on your information.
Dec 9, 2021 / Tufline GB4 Rear Blade - anyone own one / opinions?? #6

The thing is sizing a blade is more about how much traction you can get out of your tractor compared to the work you want to do. It is not so much the weight of the blade as the length. The longer the blade the harder it is to pull when it is full of gravel. You can always find a lower gear to turn the tires but you need traction which is tractor weight and road surface dependent. So advise is difficult. A wide blade is nice. If you use it taking smaller bites on your road it may be fine. It is a great tool for ditching. I can use mine on my 5000 lb (w/ loaded tires and FEL) 30 hp tractor to clean out existing ditches but digging new ones is not easy. This is my 60" wide L3010 and 7' blade set up for ditches. 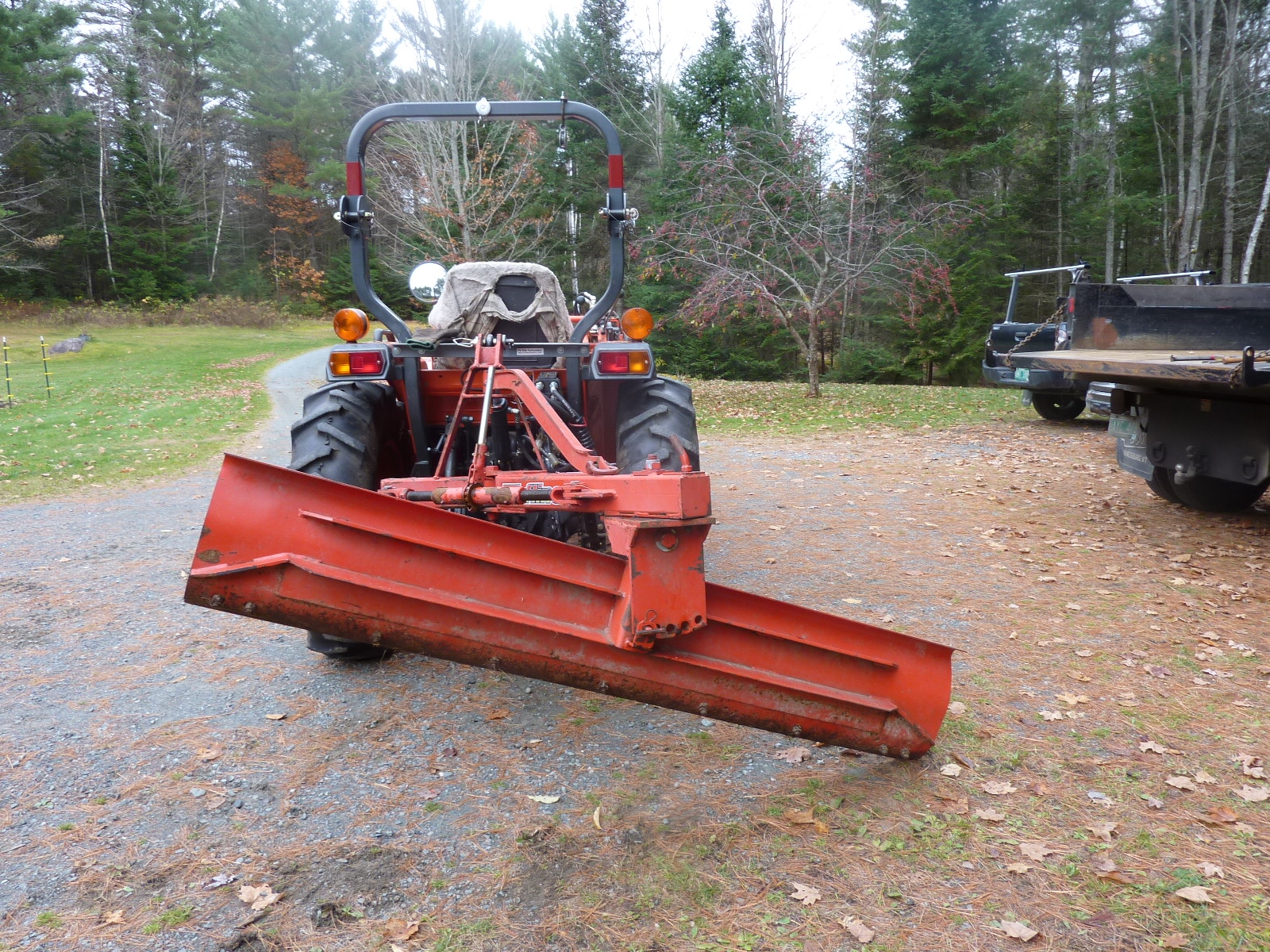 If you do get it and you are not happy I would make a swap deal with you if that was something that interested you and was to your advantage. My 56 hp tractor is 78" wide so I would like a blade wider than 84". It works fine with the offset but ...

I think your idea that you take it only if it is a real good deal, to good to pass up, is smart. That way you won't loose anything but time if it doesn't work out.

BTW what does your tractor manual suggest as a max blade size ?

8 Ft could be too much for your tractor setup. Like has been said, if you can buy it at a great price, go for it. Tufline is a excellent company and the GB4 is one of the heavier series. Ken Sweet
Dec 9, 2021 / Tufline GB4 Rear Blade - anyone own one / opinions?? #9

I have an 8 foot Rhino @ 1050# on my Kubota M6040. I've never had any problems clearing snow with the blade. As you could expect - if I set a deep angle - I can end up with all four wheels digging holes - if I'm grading dirt.

If it were my decision - I would buy the blade. If it ends up being too much - cut an equal amount off each side. Around here - ANY type of used implement is next to impossible to find. 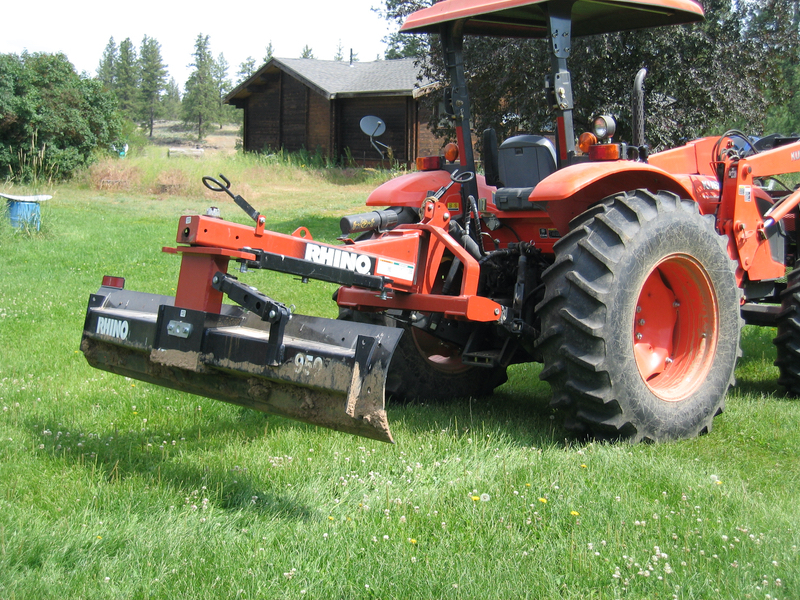 I've got the same tool as Gordon. 7 foot. It scrapes snow very well behind my light weight 35 hp Hurlimann.
It will "surface" our long drive all day long on the downhill run. Coming back up, carrying any real load will have the wheels churning. (Steep drive though)

The unit is well built. the tilt and swing features are easy enough, but it takes time to swap out that screw adjuster from side to side when called for.

I need to go out back and fetch the blade in where it's handi, snow is on the ground now, and if it freezes hard, that blade sure cleans the dooryard in fine fashion.
You must log in or register to reply here.