What did you do to or on your Mahindra today?

erkme73 said:
@jerryk, at the risk of hijacking, can you tell me more about the 3pt wood hauler you have? Looks custom. Did you do a write up on it?
Click to expand...

Eh, it's ok. Just thought it looked like a neat carrier that could resolve my issue with picking up heavy loads that tend to tip.
Jul 12, 2018 / What did you do to or on your Mahindra today? #333
G

Two guys were trying to clear some land near me, just a little spot, with the remains of a very old, very abused Massy Ferguson tractor. It had a front end loader and a small back hoe on it. The clutch, I think, went out on it and it would not move.

They were going to take it home and see what they could do with it. They managed to get the front wheels up on a trailer but could not get the back wheels on. They ask me if I could pick up the back end and slide the whole mess forward on the trailer.

I told them that I was not sure if my tractor (a 4540) would pick it up but I would try. I got around behind it and slid the bucket under the back hoe, uped the rpm to about 1500 and eased back on the control valve. The 4540 never even grunted. It picked the thing up and moved it forward with not a problem.

Doing some misc hauling of tools, hoses, etc. Shut the 2538 off, came back 5 minutes later and it acted like I had a dead battery. Wouldn't even click. I thought maybe my PTO was on, or some other "safety switch" stuff was the cause. But after 15 min, I looked under the battery terminal covers, and found a bunch of corrosion. Had to be a contortionist out in the field to get enough corrosion off to start it and get it back to the barn.

Then...I basically had to take apart the whole front end in order to get to the battery terminals. What a cluster ____ engineering design that is :thumbdown:

I was surprised at the amount of corrosion that had built up over 15 months. And I garage the tractor whenever it is not in use. I'll be sure the check it every 3-6 months now, so I don't get stranded in a far more desolate location next time.

Anyway, got the terminals exposed, cleaned them and re-assembled. Works like new now.
Jul 18, 2018 / What did you do to or on your Mahindra today? #335

Neighbor dumped me 4 big loads of gravel/clay mix last evening. [ $100 a load ] This morning I am going out and clear the downed tree mess out by my pistol range, then start working on my new ridge road, filling in the low spots with the fill. It is still nasty dry up here.... 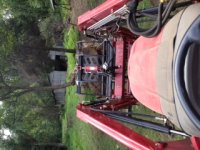 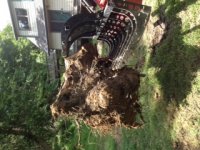 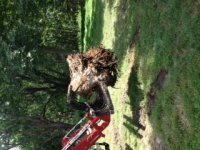 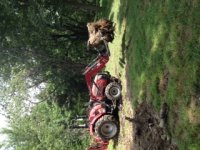 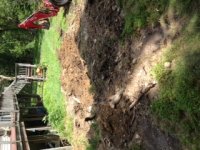 Nephew dug out the stump last weekend., roots broke fairly easy, stump was about 2 feet taller but then loader was maxed out lifting it by trying to just pinch the wood part of it with the grapple. cut off two feet of stump today and it was able lift it no problem. I am so pleased with the EA grapple and with the 2555! ONly suggestion I have for EA is the part where the shoe hooks into the grapple on the SSQA should be solid steel. diameter of stump was about 16 to 18 inches.
Jul 30, 2018 / What did you do to or on your Mahindra today? #337
D

JerryK said:
I did, at one time.... but every five years or so I get paranoid and delete all my pictures. Sorry....
Click to expand...

dickfoster said:
Paranoid? Are you growing that whacky weed on your place, Jerry? :laughing:
Click to expand...

I did my share in my younger days..... I just notice that if you Google, say ' 1538 TLB ' , or ' 5035 ', you may at sometimes see pictures of the inside of your garages and barns that show up in the normal Google images areas. The images that are here on TBN show up for the general public... just makes me paranoid sometimes... Although I am a fairly good shot, practice often, have a back hoe, and lots of property to dig....
Jul 30, 2018 / What did you do to or on your Mahindra today? #339
D

Yep he’s at it again

Yeah I have this sign up at the top of my driveway. 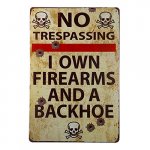