What have you done to your Branson today?

Especially with the hydraulic chute rotation and deflector it could be fun
It won't see much traffic when I'm using it.
Oct 13, 2021 #942

Cougsfan said:
Looks like it will definitely move huge amounts of snow. I get a kick out of the "Caution Do Not Pass" sticker on it. Maybe you should replace it with "Go Ahead, Just Try To Pass Me" sticker.
Click to expand...

Yesterday afternoon in the hot sun I'd decided to hook up my Bush Hog for todays work before I quit.
People-this is certainly not my first rodeo to hook up a PTO shaft! I've cussed them some then once I'd cleaned it up and lubed the splines and such it was not undoable at all.

Yesterday was different. I did not and never have had issues aligning the splines- it's that damned ring that releases the balls inside to allow a lockup that I was fighting with! I pulled the tractor side of the sliding shaft off, cleaned it and doused with lube. I wiped down the tractors PTO shaft and lubed it but will admit that I never got it connected-the first time ever I've failed at getting one on!
It's possible my hands have aged out on whats never been a real easy job. Both hands had CTS release surgeries over 20 years ago, also had injections for trigger finger and lately my left shoulders begun to "come out" (try that if you like pain?)- so maybe it's me? maybe not?
Yesterday after my shower during my "Especial time" I burned up google to look at the two types of PTO quick connects sold that make the job easier. They sell for similar prices a two piece set-around $350 and both look robust and workable w/o cussing yer PTO. As my tightwad mentality kicked in along with my lifetime of wrenching I decided the PTO shaft need a new look today in the shop. I drove the Mule down to the pastures edge where it all sat waiting and pulled that shaft, threw it into the Mule for a new look/see today in the shop.
Maybe I'll throw money at the issue, maybe I'll make it work better-we'll see huh?

I have always felt that a forked wedge that slid behind that ball release ring forcing it forward all the way- while you push the shaft forward would make a crappy job easier. Sort of like a tie rod removal tool but less wedge shape and lighter weight so it remained in place during the operation , would ease the task.
Things is that once you've lubed it all well the entire mess is so slick that that release ring becomes a tough thing to massage forward on both sides.
Oct 14, 2021 #944

I know your frustration. I have arthritis in my hands. Sometimes hooking up a PTO shaft can go easy, other times the same shaft can be so difficult. There have been numerous threads in this forum about tricks to make hooking up a shaft easier. Some of those tricks definitely help, but it is still a pain. You'd think after all these years an easier way would have been standardized and made easier. Instead we get poorly designed PTO drive covers and shaft covers that just add to the frustration.
Oct 14, 2021 #945

You can get just a new yoke and replace it,
Bare Co USA - 80 degree Welded Wide Angle Joints
this out fit has ends for most common shafts.
Also they make an easy to uncouple and slip back pto shaft guard.
I have their shielding on my brush hog and by undoing the two clips I can telescope the guard in on it's self
so that all I'm fighting with is the pto coupling and shaft the guard is clear out of the way.
It makes it easier for me and also makes greasing the ujoints easier.
Oct 14, 2021 #946
K

After I took the coupler apart today and cleaned it up it's cooperating and slides on and engages easily now. Between old hands and slick parts and a coupler drive shaft that was sluggish with old grease I'm back in business. I do agree with others who like the old style better. Not buying the $350 easy hookup solution after all.
Oct 14, 2021 #947
E

Something I realized only recently is that the coupler will slide a little ways on the PTO stub without disengaging the lock. So you can get it lined up and on the stub and then turn the ring or push the button to release the lock and slide it the rest of the way.

If I am fighting with the shaft I'll tie it up to the top link with a bungie cord so it's suspended at the right height. They I can concentrate on hooking it up without having to hold it up as well. I've only needed to do this a few times but I keep a bungie cord the right size wrapped around the rear work light. (I got this from someone else on this site, can't remember who).
Oct 14, 2021 #948
K

I've owned some tractors that were easier than others. One of my Kiotis was a head banger. The Branson I can climb onto the bush hog and stand astried of the shaft then step down into nasty land to couple the thing. The way in which the upper rear link swings aside helps to get down in there. I've never owned a coupler with a ring that asked to be turned.
I cut today for a couple of hours and the 10 hp difference between the Branson and my last Kioti @ 38hp is noticeable as is the weight and the wider/longer tractor plus the canopy to bang onto limbs.
I have a wildflower meadow that gets dog ugly late in the season and is the view from our kitchen sink so it always gets first call from the boss to clean it up.
I'll venture to say that I can easily run up one gear speed with the increased hp of this Branson. It is a very smooth tractor but in spite of my short legs, I'm banging my knees on the steering column-so gotta find a better position. This tractor has better brakes for some reason than my Kioti which had similar wet disc brakes.
When I prepped my Bush Hog Squealer 600 rotary cutter the gearbox was nearly empty! Took a whole qt of gear oil. I only use it once a year so who knows where it all went?

This tractor needs a rt fender grab handle for me to hang onto. There a couple of plugged holes there to use. I find myself grabbing the FEL frame if I mount from the rt side, left is OK as is but could use a grab handle on the left FEL frame too. My largeish butt gets in the way to mount on the rt.
Oct 14, 2021 #949

kantuckid said:
This tractor needs a rt fender grab handle for me to hang onto. There a couple of plugged holes there to use. I find myself grabbing the FEL frame if I mount from the rt side, left is OK as is but could use a grab handle on the left FEL frame too. My largeish butt gets in the way to mount on the rt.
Click to expand...

I hate to see Branson getting rid of those small details that put them a step above everyone else. Details like grab handles, steering cylinder covers (saw a post on the FB group about this, I think it was you) and some more stuff I'm forgetting.

My 2017 F36Rn came with a grab handle mounted on each fender and steering cylinder covers. It doesn't came with a right side step but no big deal as I don't mount the tractor from that side anyway and used the holes there to mount my toolbox which filled somewhat fast with only the tool kit that came with the tractor.

Note the grab handles on the fender on the left picture and the steering cylinder cover on the right picture. 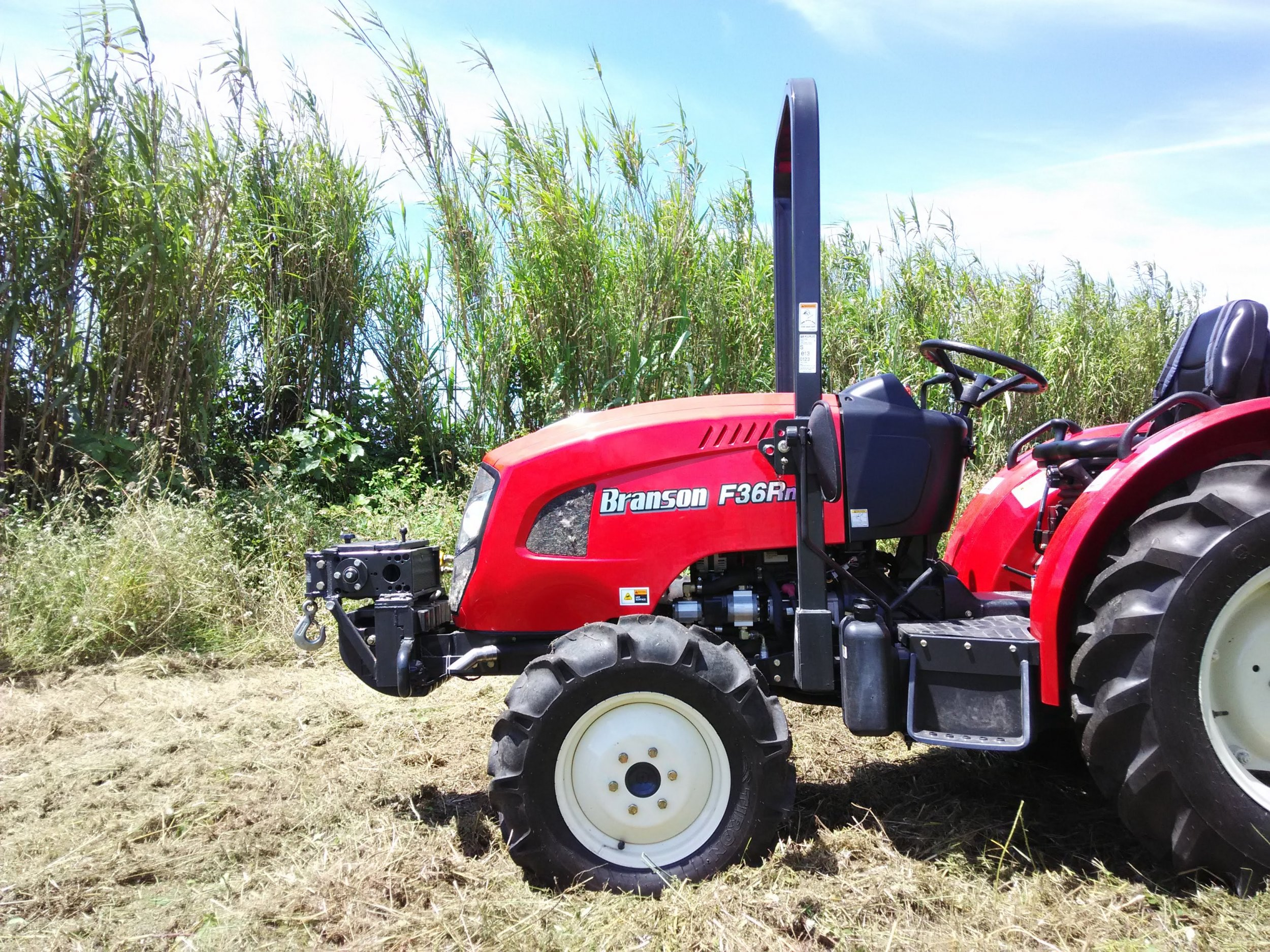 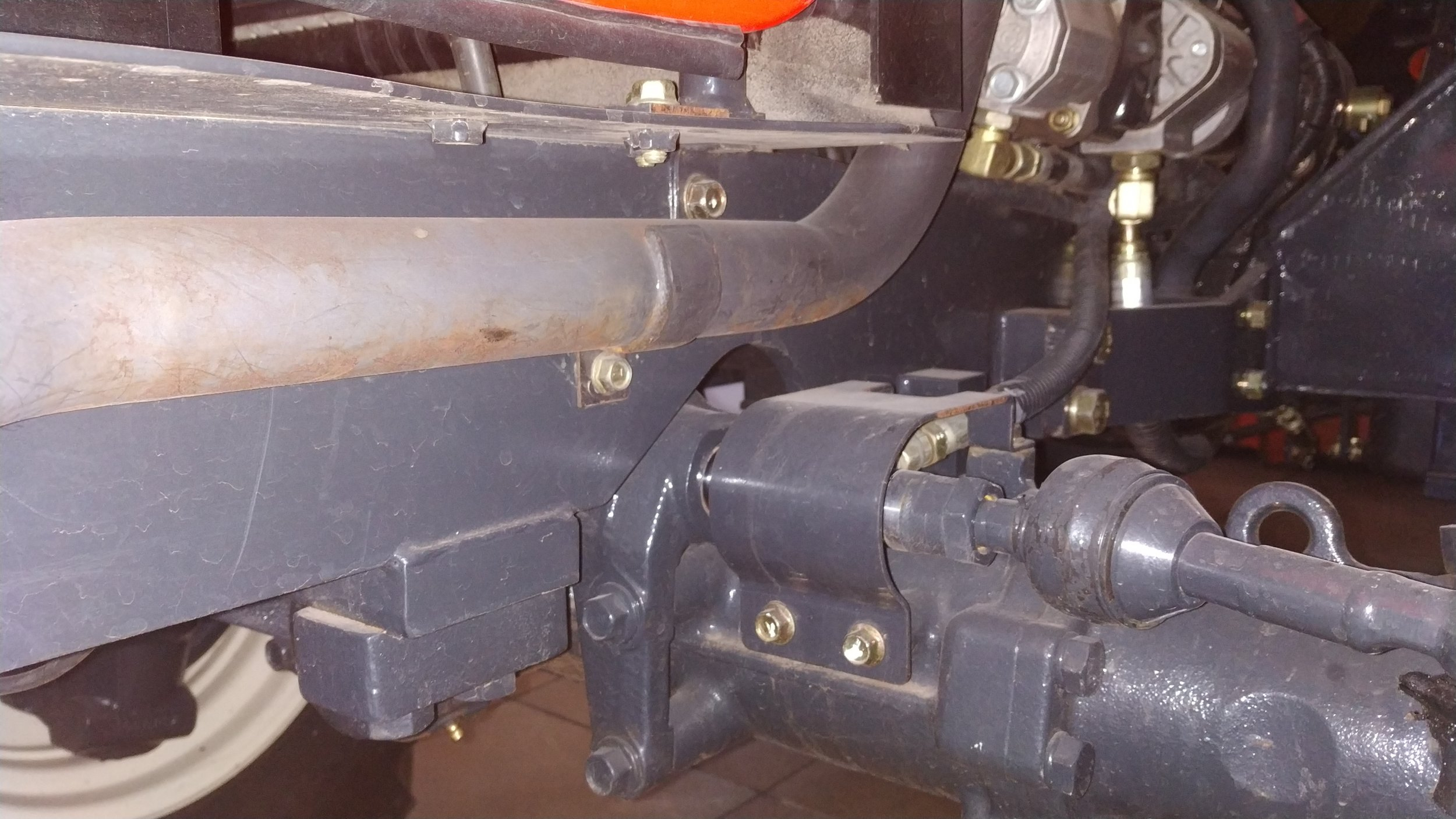 just got my branson 4720h yesterday. used it a bit to move some things around today. fantastic.

cleaned and lubed the linkage for the pedals, and seems to be a bit easer to run, need to inspect the return spring.