What is your favorite tractor and why?

I thought this would be interesting. I will start with my two favorites.

1. John Deere 4020. Although we never owned one, my best friend did. Growing up, when I would help his dad on their farm, the 4020 was the one I drove. That tractor is still going strong today and is worked on his farm almost daily.

2. International 5488. Probably because this was the only new tractor my dad ever got for me. I always got the worse ones on the farm till the 5488. Also it was the only cab tractor I ran that the A/C actually worked! Loved that tractor!
Apr 7, 2018 #2

My backhoe. I would never buy the same model again, but one day I will buy another backhoe. My mistake was going with 2 wheel drive and an open station. Next one will have AC and be able to drive after it rains.

My father's TO35 that I will be bringing home when (if) the snow ever melts. I always liked them anyways even before he bought his.
After he passed away I told my mother that if there was only one thing of his that I could have, it would be his Ferguson.
Apr 7, 2018 #6

I like them all, but the favorite has just got to be our 1958 John Deere 530. A Poppin' Johnny. That year was the last incarnation of the famous 2 cylinder John Deeres. And maybe just to say, "goodby", JD pulled out all the stops and for one crazy year in 1958 they gave their last 2 cylinder tractors most of the modern options that they were to offer on the next series of tractors. It couldn't have been a money-maker for JD to do all that for just one year, but they did. A few years later we jumped at the chance to buy one used. It had most of the special options, and I added most of the others. We still have it.

Ours has 12 volt electrics, Power Steering, Wide front, QA hydraulic loader, special seat....and remote hydraulics. Wow!! I added JD's nifty canvas umbrella for the summer and chains for the winter. But mostly we just use it as is. It's run a mower, grader blade, PH drill, and plows...both CatI & II. As well as PTO driven splitters, irrigation pump, and sometimes a 3pt backhoe. With today's modern gasoline I have to clean the carb float bowl each spring, before starting it the first time - but that's easy to do. No other problems. It still runs just fine.

It idles at a few hundred and makes max power at something like 1200 rpm. The sound of that big two cylinder motor working that slow is special.
rScotty

I had a no name tractor painted green and yellow that I really liked. Seat was just pressed metal. It was old and didn't have roller bearing pedals. But me and it would go just about anywhere, even in the snow. I had to make my own motor sounds, though. Got pretty good at it.....
Apr 7, 2018 #8
OP

Jstpssng said:
My father's TO35 that I will be bringing home when (if) the snow ever melts. I always liked them anyways even before he bought his.
After he passed away I told my mother that if there was only one thing of his that I could have, it would be his Ferguson.
Click to expand...

Farmall H. That's what I learned to drive on when I was about 10. Dad was spraying the roadside weeds with the hose and wand off our big tank spray rig and had gotten to the end of the hose when I walked up. My driving "instruction": "Climb on it an pull it up." So of course I did.

A few years later I spent many long hot summer days in the Sacramento Valley on it cultivating beans, corn, and sugar beets. We were glad when Dad got us umbrellas to keep off the sun. Also spent many cold pre-dawn hours raking beans for harvesting - had to rake them when the dew was on them so they wouldn't shell out when raked.

We had three or four of them and an M. We had both wide front ends and single front wheels for them. I don't know what year model they were -- Dad bought them used in the 40's.

For tillage we had several TD-40s: 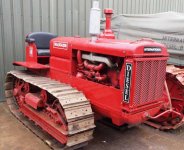 They all started with a crank. I don't think I ever cranked one, but I ran them enough that my ears still ring. I recall waking up on one as it was about to get into the fence. I was pulling a "Swede harrow" as I recall we called it - heavy wooden spike tooth harrow - with something behind it, probably a "roller" (cultipacker). It for sure wouldn't back up so turning it around that close to the fence was at least interesting. Kept me awake the rest of the shift!
You must log in or register to reply here.
Share:
Facebook Twitter Reddit Pinterest Tumblr WhatsApp Email Share Link