What you don’t know…

So I was cleaning off my PTO fitting and then I noticed something on the retaining lip; 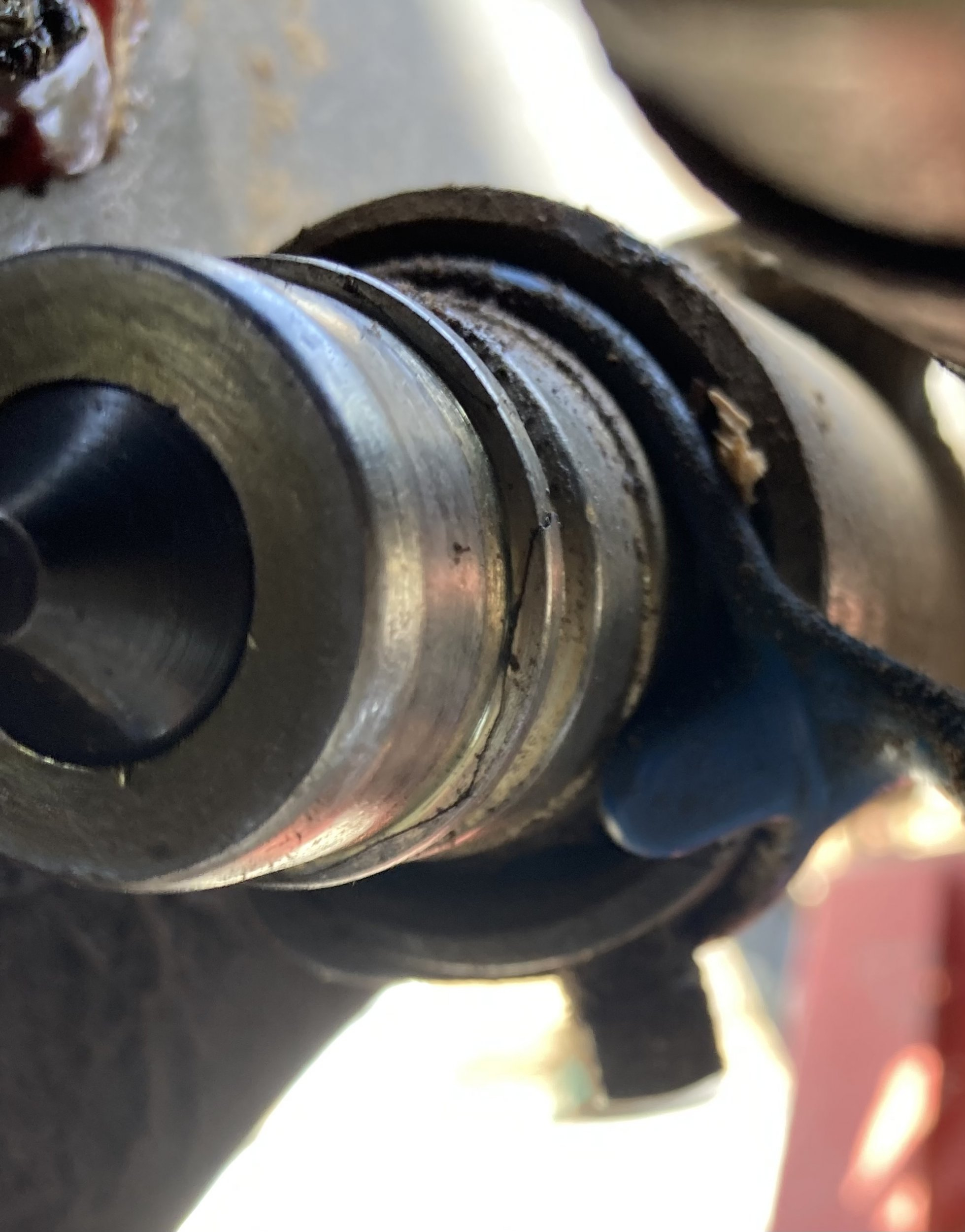 Yup. That is a fracture line; 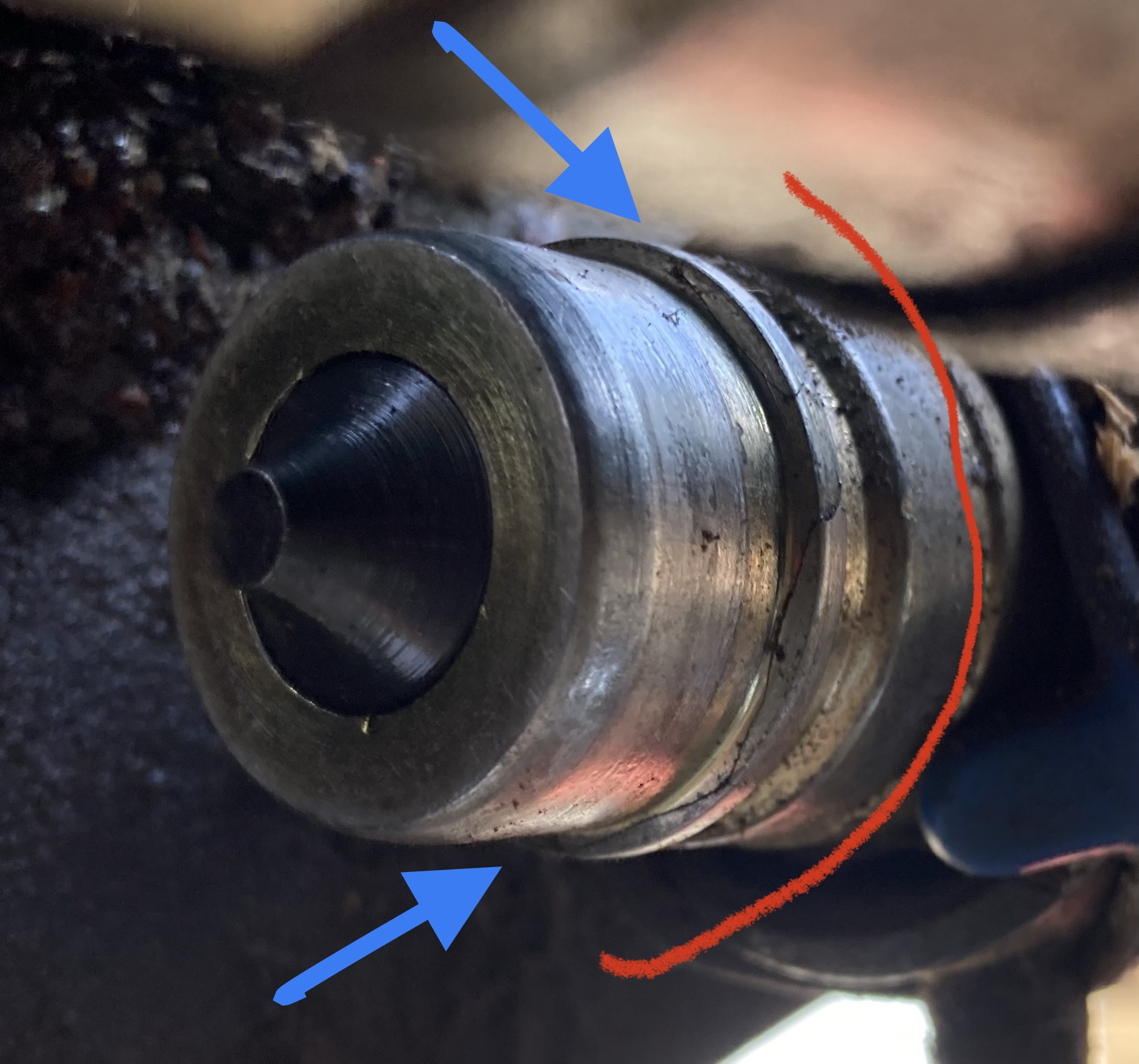 It is a very protected area, so I don’t know what to think about the cause.

Any tips for unscrewing these? There isn’t exactly a lot of room in there.

There is a lock nut and a square head bolt that probably goes up from the bottom. Loosen and back off the square head bolt. Then try to feed excess hose into tube and the end of the hose should protrude enough to wrench off the fitting. It might have more slack if you raise the loader up about 3-4'.
Apr 8, 2022 / What you don’t know… #3

As far as the cause, any chance the brand names of the female/male fittings don't match? I would start there even know most people expect that they interchange.
Apr 8, 2022 / What you don’t know… #4

Can you loosen the set screw in the tube and slide the hose and fitting out enough to get wrenches on the fitting?
Apr 8, 2022 / What you don’t know… #5
OP

Thanks, I did undo the bolt; I can only seem to get about an inch of extension, basically just enough to read the inscription on the coupler. Since there is a cross tube just above the coupler, and the front arm 90 degrees away, there isn't a great deal of elbow/wrench room. I am considering buying a deep well socket that would match, as the the current location looks like a knuckle buster.

I sent photos to Terry, but I haven't heard back from him yet. From the numbers that I can see, it looks to me like it is a Stucchi adapter, which matches everything that I have here at the moment.

I haven't gone back to the engine side to see if there is more slack there that can be fished forward. Has anyone fished it back to the fire wall and worked on it there?

What seems weird to me about the fracture is that it is on the outboard side, which is where the metal of the lip should be in compression. Naïvely, I would have expected the fracture on the other side of the lip. The fracture is bad enough now that you can catch the edge on your finger as you run it over the top, about a half a millimeter or so sticks out that is hard to see in the photos.

@SpringHollow Thanks! On my machine the other end is under most of the other hydraulic lines and attached to the PTO solenoid block. All I can say is that would be fun, as it is under the diesel tank, so it looks like removing the diesel tank would be the way to go for that one.

I plan to talk to Terry tomorrow, and see what he says. I just hope his plan A isn't "we put the fitting on before we push it through the tunnel." If it is, I am replacing the hose and the fitting at the same time. No plans to do this twice.

My brain is working slow these days -need sleep. My recollection is that when I swapped mine for flat face, I was able to get enough slack by raising the loader arms as mentioned above by M5040. I did not have to raise them all of the way.
Apr 27, 2022 / What you don’t know… #9
OP

Just to finish this off; I bought a new fitting from Power-Trac and put it on. The old fitting required a monster wrench to loosen, but it came off with just that.

A trick to getting enough hose to work with is loosening the ring bracket that the PTO and QA hoses feed through at the front wall. You can then loosen the set bolt and get 2-3 inches of hose to work with. The swap went quickly and with the FEL arm up at a good working height, no more than half a cup of oil leaked out. 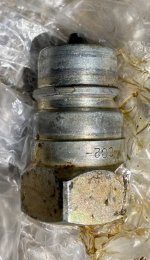 The bracket that I loosened; 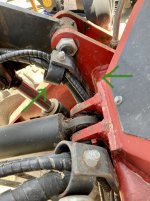 The working area, not too bad; 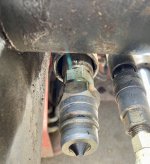