What's your dog's name and how did you name it?

Ours is a Redbone Hound mix - a little lab in there but she was the only one in the litter that came out all red. We named her KayAnne - a play on the spelling of cayenne peppers for her red colour. 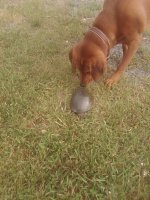 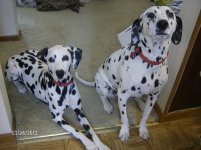 "Chief", sitting, anybody who's been around fire chief's will understand (they think they're God!

"Dottie", (Lil' Miss Lot's of Dots) laying down, self explanatory! 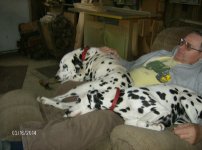 My last dog was a pointer-mutt(Mountain Cur?) mix.
Pure black, medium-sized, had the ugliest wrinkled up face you ever saw on a puppy. I mean he made a shar pei look good.
So we called him Wrinkles.
Good bird dog, loved to run behind the snow mobiles on the trails, lived 20 years before we had to put him down.
May 13, 2014 #44

Ours is (we think) a Labrador-Chow mix. We had just moved back to the home area, put in a late garden, and one afternoon he comes out of the tall weeds. We wanted a dog, but were waiting to find the right one. I tried chasing him off a few times and he came back. I called the dogcatcher on a Friday and he didn't show up. We decided we had been chosen, bought food & a collar, and on Monday called the dogcatcher and asked for a reprieve.
For some reason the move "Every Which Way But Loose" came to mind and he is named Clyde.

MossRoad said:
We got a dog named Skippy, from the pound, when I was 8 that was white with peanut butter colored blotches. Smartest dog I ever met. They said he was untrainable....yeah, about that...
Heel, come, sit, stay, lie down, roll over, roll over the other way, dead dog, dead dog's don't wag their tail (he'd stop wagging), dead dog's close their eyes (he'd close them), sit up, shake, other paw, speak, growl, count to one(one woof), two fingers go two woofs and three fingers got three woofs. Four fingers and he'd just go nuts! Jump through a hoop. Climb a ladder (couldn't get down from the roof, though). Fetch. Get the paper from the paper boy. Take it to anyone in the house by name. And if you'd snap your fingers and point at someone and yell "WARN 'EM" he'd become the most vicious, snarly, growling, slobbering beast you ever saw!!! YIKES!!! Untrainable indeed. NOPE! :laughing: He'd catch biscuits off his nose. And if it was raining out, he'd come in, you'd say "Wet feet" and he'd plop down on his back with his feet in the air, you'd dry dry his feet with a rag, hand him the rag and say "put it away" and he'd take it to the laundry room and drop it in front of the washer! Then, of course, he'd head straight to the kitchen for a treat. My mom taught him most of that stuff. Just a once in a lifetime dog to witness.

I had my first dog at about age 16-17 and named hime Dog, after the dog in the movie Big Jake.
View attachment 374923. Very loyal dark collie mix. Great dog for a young man. Very mellow. My sisters thought 'Dog" was undignified, so they called him Mr. Dog.
Also, Dog could sneeze on command. And I mean a big, wind up, bounce your nose off the floor sneeze! I think he had allergies or something, because every time I told him to speak, he'd sneeze first, then start barking. So I just stopped saying speak and would say sneeze instead. He got too old to travel when Letterman was doing Stupid Pet Tricks or I'd have taken him. Overall, that was the best dog I ever had the pleasure of knowing.

We had another dog named Pooky after garfield's teddy bear. She was a border collie with a perfect black eye on the white side of her head. Sweatest dog you'd ever meet, but for a border collie, she was a loveable box-o-rocks. Dumber than a doorknob. Great pet though.

And finally, my wife and I got a Cairn Terrier when we got married named Max. He came with that name. What a fiesty little beast. Very smart, too. Many tricks. Typical terrier that thought he owned the place. We got him a kitten to keep him company. Kitten raised by a male terrier was too funny. The cat would walk on a leash with the dog. That got some looks. :laughing: (guess what I named the cat? Cat!).
Click to expand...

Some people mistakenly base their pet's intelligence on their own lack of training ability. The smarter the dog, the more problems you're apt to have if you don't find ways to stimulate it's natural instincts. People who just want a dog to keep tied out all or most of the time should consider a lawn shadow; very low maintenance, no feeding or vet bills, and they never bark. 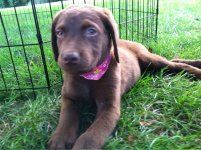 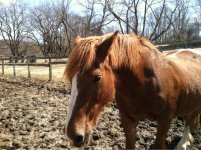 Someone brought us an Australian Cattle dog that they didn't have room or time for. He came with the name Jack. We didn't change it ,'just have to make the distinction of Jack dog Jack cat or Jack horse.
The first day was funny when he herded the horses. But that got old and kinda dangerous. You should have heard the silence one day when a boarder lady screamed Jack....... Off as he was chasing her horse.
May 13, 2014 #49

One time a scary looking big stray dog showed up by our house. First just played with our dogs but when saw us immediately run away. When he returned next day my wife gave him some food so he stayed. We called him Smokey because he looked like the cartoon bear. But it was wrong name for him. We should have called him a Shadow because he will not move away from my wife and followed her everywhere she went like a shadow. When walking in the woods and there was some racket he would run to check it out but returned right away by my wife. When she talked to a stranger he was sitting in between. He was scary looking because he was so hairy and big but he was the nicest dog we ever had. He never walked in the house. He slept curled outside in the middle of the yard covered by snow. When we got up he just jumped out of snow. I checked his paws they and they were nice warm. His fur was at least 4 or 5 " long.
May 14, 2014 #50