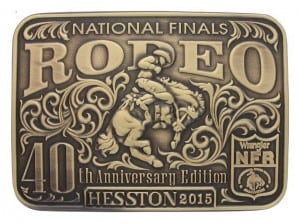 “In 1975, when the then-named Hesston Corporation introduced the first Hesston NFR Buckle Series, I’m sure no one imagined the relationship would mark 40 years and create a 40th Anniversary Edition buckle,” says Cale Sledge, tactical marketing manager at AGCO. “However, this milestone is a great reminder of the strong bond between the Professional Rodeo Cowboys Association (PRCA) and the Hesston brand. It is a long-standing partnership, and we’re proud to introduce the 2015 buckle to again commemorate the NFR and our involvement with the event.”

Designed by AGCO and manufactured in the U.S.A. by Montana Silversmiths, the buckle versions available include the ever-popular solid brass polished buckle; large and small pewter buckles and a gold and silver plated version. The 2015 design took inspiration from the 1975 version. Supplies are limited and buckles are sold through Hesston dealers.

An enduring tradition and long-standing relationship

The relationship between Hesston and the PRCA began in 1975 when Hesston’s advertising team approached PRCA about televising the final night of the NFR, then held in Oklahoma City, Okla. Rodeo fans were an ideal market for the hay and forage-harvesting and handling equipment manufactured by the Hesston, Kan., company. Hesston was granted the rights and became the owner and sole advertiser of the full two-hour telecast which reached viewers in Oklahoma and Kansas as well as parts of Texas and Nebraska.

Hesston NFR commemorative belt buckles were introduced in 1975 as an incentive to get rodeo fans to visit Hesston dealerships. The buckles were promoted during the rodeo broadcast and through direct mail.

Both the rodeo telecast and the buckle series were successful in increasing awareness of Hesston and in turn, equipment sales. And so, the partnership began.

As popularity of the broadcast increased among rodeo fans and Hesston equipment dealers, the number of stations west of the Mississippi that were broadcasting the event increased. Popularity of the event also increased, leading to sell-out crowds even during the weeknight performances. Eventually the NFR outgrew locations in Oklahoma City, and in 1985 moved to Las Vegas, Nev.

Because of the popularity of the Series and the tradition of belt buckles as rodeo attire, Hesston wants to see everyone’s favorite buckle, old or new, Hesston NFR Collector Series or not. Buckle collectors and rodeo fans are invited to post an original photo of their favorite belt buckle at the Team Hesston Facebook page for a chance to win a 40th Anniversary Edition Hesston NFR buckle.

Follow the posts on Facebook and vote for your favorite entry! The winner will be chosen from among 10 finalists receiving the most votes. Judging will be based on creativity of the photo and relevance to the Hesston brand. The winner will receive choice of three versions of the 40th Anniversary Edition buckle. Entry deadline is Dec. 15, 2015. See the Terms & Conditions for details.

The very first belt buckle commissioned by Hesston was made in 1974 and featured only the Hesston logo in a rectangular frame. Today, these buckles can bring as much as $1,000! The NFR Commemorative series is among the most successful and widely collected commemorative buckle series available today.

The WNFR, held in Las Vegas from Dec. 3 – 10, 2015, is sanctioned by the PRCA, the largest and oldest rodeo-sanctioning body in the world and the recognized leader in professional rodeo.

For information about Hesston by Massey Ferguson hay equipment, visit your local dealer or go online at www.hesston.com.