Valtra’s Unlimited Studio has put the finishing touches on a golden N Series tractor that will be displayed this spring at special events and exhibitions. Customers can also order the same Unlimited specifications for their own tractors.
The specially equipped Valtra N174 can be identified by its bright golden graphics, tinted windows, the golden award logos on the side window and Unlimited decals on the door hinge. The interior of the cab features a brown leather wrapped steering wheel and seats, as well as an exclusive Unlimited dark grey mat. 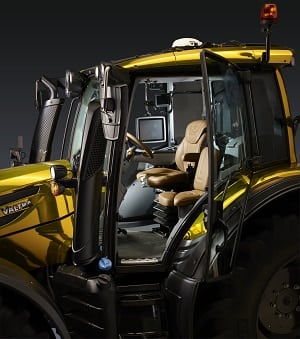 Launched in the second half of 2015, the Valtra N4 has proven to be a very successful model series. At the Agritechnica agricultural trade fair in Hanover, Germany, last November the Valtra N174 received both the “Machine of the Year 2016” award and the “Golden Tractor for the Design 2016” award. The international jury praised the fourth generation N Series for its “modern, dynamic, compact and cool look”. Valtra introduced the new look at the end of 2014 with the launch of the bigger T Series. The same design will be adopted by all Valtra models in the future.

Valtra is recognised around the world for its custom-built concept, allowing customers to select from hundreds of features and options according to their individual needs. Valtra’s Unlimited concept takes customisation to a new level. These days around 10 percent of all new Valtra tractors are sent to the Unlimited Studio, where Valtra’s skilled technicians can fit any features or equipment desired by the customer as long as they are technically feasible and legally compliant.

Introduced in 2013, the Unlimited concept has been a successful innovation that ensures that the end product is perfectly suited to the customer’s tasks and operating conditions. While the first Unlimited tractors were supplied mainly for the Finnish market, the Unlimited Studio now delivers tractors to over 20 countries around the world. All of the features and equipment fitted in the Unlimited Studio are fully compatible with the model in question, come with a full factory warranty and are backed up by Valtra’s spare parts services.