I'm not from the South, never lived there and have hardly visited. But there is some Southern cuisine that I like. Or really like.
When I was 7 or 8 there was a girl the same age who lived a few houses away. She had family from the South. One summer her Grandma was visiting and she brought with her some green peanuts. She put them in a pot, boiled them up, and I got to eat some. Shell and all. Till my tummy hurt. Mmmmm.
As an adult living in the Puget Sound region, I looked and looked for green peanuts or boiled peanuts, remembering those delicious peanuts from decades before. I found folks selling them in South Seattle but they were always out whenever I could come by.
So, after hankering for boiled peanuts for nearly 60 years I decided to see if I could get raw green peanuts shipped to me. I wasn't having any luck but did run across all sorts of recipes using dried raw peanuts. And dried raw peanuts are for sale here on Whidbey Island at not just the feed store but also a local hardware store. For squirrels. What makes them so special anyway?
Since squirrels eat the same peanuts as humans, and in fact the peanuts diverted for animal feed are fit for human consumption, I just looked at several brands to see which had the larger peanuts. The hardware store won out. Better pricing too, which surprised me.
So I cooked me up a batch of boiled peanuts. And another. And so on. I have tried various spices. There are a ton of recipes online for making boiled peanuts from dried raw peanuts. What really matters is that I like them. Really like them. So does my son and my wife.
The upshot is that I really like and recommend them. They take several hours to cook. So if you have a day to burn and few friends and a big pot and a crab cooker, AKA a turkey frier, then look online for a recipe that looks good, buy 5 pounds of raw peanuts, plain salt, any spices you want, plenty of cold beer, and cook yourself some boiled peanuts.
I have a big fire ring and a nice large covered area practically next to it. So when it gets cold, but sunny and dry, we will be having folks over for baby back ribs, boiled peanuts, beer, and a big warm fire.
Eric
Oct 13, 2021 #2
P

I really liked your story but then I thought all peanuts were boiled? Or maybe I’m exposing my southern upbringing. Don’t eat the shells though.
Oct 13, 2021 #3

Being on Whidbey you were just asking the wrong people. I knew a few Filipinos who would bring them to work. They got there's at Coupeville farmers market (Tee's Nuts).
I've never cared for the taste but my wife makes them a few times a year.
Oct 14, 2021 #4

I have been a peanut addict most of my life; keep some peanuts on hand here in the house at all times; very seldom a day goes by that I don't eat peanuts; used to buy raw shelled peanuts by the hundred pound bag and roast them ourselves at home. I've also had a reputation most of my life for being one of those who eats and enjoys anything and everything.

But I have bought boiled peanuts twice to try them, and threw them in the garbage; used to think a peanut could not be destroyed, but I was wrong; don't know how anyone could eat boiled peanuts unless he was starving.
Oct 14, 2021 #5

I started eating boiled peanuts many years ago after a trip to South Carolina. Since then I've experimented with many different ways of making them. By far the easiest is to cook them in a crock pot, just give it lot's of time.

I've gotten my raw peanuts at Walmart (Hampton Farms Brand). Also if you're in need of a quick fix Walmart also sells boiled peanuts in a can, not great but better than nothing.
Oct 14, 2021 #8
M

Maybe I’ve just had improperly prepared boiled peanuts, but to me I’d rather eat them as is v. boiled.

Why don't y'all just just order them? 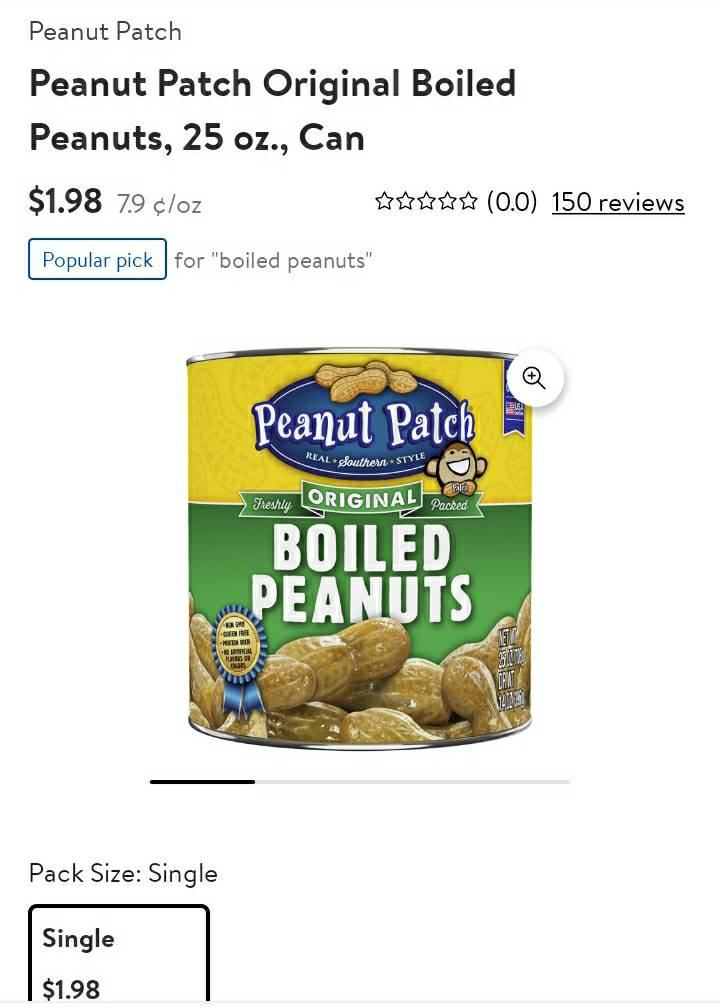