Mud in Front of the Barn issues

I've been going about this all wrong and hopefully I'm slowly figuring it out. My first mistake was not fencing out the horses from where we have to walk to get to the feed, and then having them behind a fenced area when we feed them. That's done and it's been a huge improvement. Next I will fence out the goats, but the only way that I have to do that will require building a new area for them to be able to get out of the rain. That's coming. Until then, I'm dealing with a mud mess after a rain right in front of the feed room door.

My first thought is to just add more dirt to stop any water from getting there. Where I've done this before, the dirt just disappears from the animals. I honestly don't know what they do with it, but it seems to go back to where it was before fairly quickly. So maybe I need a lot more dirt?

My other thought was to lay down something like flagstone to walk on. It's not so much that the mud is deep, it's just very slippery with the goats, ducks and chickens walking around it nonstop, day after day.

I thought about gravel, and that just might be what I end up doing.

Then I was wondering if hay would work? Kind of let it get tangled into the mud and form something not so slippery? or will that just make a bigger mess?

What have you used to deal with mud around the barn when dealing with animals?

There is a roof over this area, the water is coming in from the sides, and the goats, which is why I'm thinking more dirt, which is obvious, but I'm just hoping that somebody out there has a better idea that I never heard of before.
Oct 19, 2018 #2

Eddie, you always have your hands full of projects. I have no help or advice on this one but good luck and I know you will find a good solution!!
Oct 19, 2018 #3
S

Hay will make a bigger mess. It holds water do that area stays muddy longer. Can you divert water before it gets to muddy area. Stone will help area being less muddy, but it will disappear also
Oct 19, 2018 #4

Until you find and fix a new goat area - I would go with gravel in the muddy spot. Maybe even wood chips - if you have them. Not straw because mud and straw mixed - which the animals will gladly do - when it dries will get hard as concrete. Remember - Roman bricks were a mix of mud and straw.

Like you - - the MOUNTAIN of dirt I brought to my muddy area with the FEL - disappeared and soon became lost to the great black void - never to return.

Already been through this for our ENTIRE dry lot the horses are in.

Get most if not all the mud OUT. Either cow carpet or underlayment, then sandrock or pea gravel depending on what you can get for your area.

Tried it a few times and got tired of replacing the rock, lol. As stated just disappears into the clay around here. Just did this a few weeks ago, spread 110tons of sandrock. 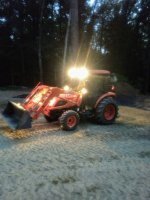 The subsoil is not allowing the top to drain. You end up with mud.

Dig in a few trenches out to lower land, filled with the same gravel that you want to use to build that area HIGHER than the surrounding grade.

No bark mulch, No hay no organic material of any kind.

(If there is a strata of impervious clay soil below the surface soil, you may be able to bore through and achieve drainage that way. Again, fill with gravel!)

Let me just add to this until I take a picture. The area that I'm dealing with is only 12x12. There is no standing water, it's just muddy enough to be like snot, super slippery, but only an inch deep. The goats, chickens and ducks just kind of work that top layer of looser soil into a type of grease that sits on top of the hard, compacted soil beneath it. When you walk on it, you don't really sink down very far, you just slide. Nobody has fallen yet, but it's like walking on ice, you go slow, you pay close attention to each step, and you hope that you don't end up on your rear.
Oct 19, 2018 #8

Put in drain tiles to get rid of surface water.

Put rock down 2-3 inches deep to act as additional drainage.

Put down rubber stall matts. 12x12 is not going to break the bank.

oosik said:
Until you find and fix a new goat area - I would go with gravel in the muddy spot. Maybe even wood chips - if you have them. Not straw because mud and straw mixed - which the animals will gladly do - when it dries will get hard as concrete. Remember - Roman bricks were a mix of mud and straw.
<snip>
Click to expand...

This may be the solution - put straw down shortly before you get the goats out, let them mix the straw and mud well, then as soon as you get the goats out throw in a bag of lime or maybe a bag or two of Portland. Mix well and let it bake in the Texas sun. Put some boards across to walk on until it hardens (maybe a month)

Let me just add to this until I take a picture. <snip>
Click to expand...

Frist year we used wood chips after getting the animals away... big improvement.

Later we found Horse Mats cheap... bought them and made paths which also helped.