arpt209 said:
I've owned the same 92 since the US military first adopted it for use. Never had a problem with it and would buy it again if I needed it. The ammunition has evolved over the years and I know some federal law enforcement agencies are moving back to the 9mm. I've shot numerous 9mm pistols & the Beretta 92 is definitely one of my favorites. I like the size & the double/single action. I also like the ability to cock it & shoot it single action and the decocking is a plus for me.
Click to expand...

I like the Beretta too. It just feels good to me, and I can shoot it more accurately than any other autoloader I have tried. The problem the Military has is their FMJ bullets that just poke neat little holes. Load one with SXT and it's a different story.
Aug 20, 2016 #32
C

IMO, everyone should have the "classics" in their collection. 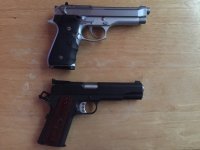 I carried one as my secondary firearm during deployments. I thought it was heavy, had poor ergonomics and the standard trigger pull was too heavy. I wasnt a fan of the 9mm in a combat scenario as well but thats a ballistics debate for another day. Some people like the physical safety and that my have been a big selling point for the military where accidental or negligent discharges might be more prominent. The 92F probably wouldnt be bad as a target pistol or home defense but as an everyday carry--I didnt like it. My 2 cents.
Aug 20, 2016 #35

IMO, everyone should have the "classics" in their collection.