I thought tusks would be better. 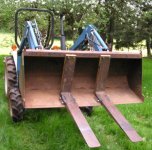 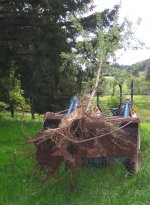 I only had two. I set them a little narrow to suit my needs at this time. I'm not carrying around pallets at the moment, but could redrill my holes if I need to set them wider.

If I was doing it again, rather than welding on ears, I might consider drilling and tapping the forks. But this seemed to work for what I needed.

I did loose a little more dirt than I had hoped, but I certainly couldn't hold the root ball together with the stock bucket.
Apr 29, 2013 / Bucket Tusks!!! #2

you will buckel your bucket in a hurry doing work like that. A bucket is built to have the weight displaced across the entire surface of the bottom. The bucket is also built to put pushing pressure on the cutting edge and transfer back to the loader frame. With those forks you are putting all the weight in the center of the bucket "weakest point" also on the top rail where there is no supports. Its a good idea, but i dont see it lasting long.
May 1, 2013 / Bucket Tusks!!! #4
OP

The tractor doesn't have the strongest hydraulics in the world, although one can dig with driving forward.

The tree in the photo is a Cherry tree that I was transplanting (a little late in the transplanting season), and it was mostly dug out by hand. The stock bucket wasn't big enough to pick it up, so I needed quick bucket extensions to get underneath it and try to get as much of a rootball as possible, and still lost more dirt than I wanted.

Yes, I know it was a bit late in the season to transplant a tree. We'll see if the tree actually survives the abuse. It looks sick now, but not dead yet.

I don't like the typical clamp-on forks like these for several reasons. They put all the the weight as a twisting action at the bottom of the bucket.

I've seen people use their buckets as grader blades. In all likelihood, this will be less damaging to the bucket than that, at least in the way I'll be driving the tractor. Certainly carrying and lifting stuff will be limited by the power of the hydraulics, and I doubt it could damage the bucket. Digging? Maybe. But, in reality, it does also change the digging dynamics of the bucket, so I may eventually just take them off to regain "bucket" capacity.
You must log in or register to reply here.
Share:
Facebook Twitter Reddit Pinterest Tumblr WhatsApp Email Share Link