Username Taken said:
It doesn't, you're right. It has everything to do with control
Click to expand...

The EPA is not going after race vehicles or their parts. They are going after illegal parts on road going vehicles and the vendors that promote this practice.

It’s the EPA, not the same EPA that used common sense to clean up cities, rivers, etc…
No, now they’re a bunch of rabid, woke, left wing extremists bent on control and virtue signaling.
Jun 16, 2021 #55 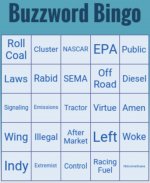 You win if you knew the reality of the situation would eventually be brought to light. Congratulations, you win, everyone loses.
Jun 16, 2021 #57

By the way, it’s easy to predict what was already said.

Username Taken said:
The EPA is a rogue agency run by eco-terrorists that hate capitalism, America and you.

Ah, come on , no need to mince words and sugar coat it. Tell us what you really think.

Seriously though, there needs to be some better communication between the EPA the manufactures and the public. What has happened with tier 4 tractors and the diesel trucks is sad. Having to Inject More diesel to run cleaner-
That is/was a JOKE and wastes fuel
When a dealer tells you expect your engine oil level to rise before the oil gets changed because of diesel fuel contamination of the oil which is being caused by the clean emissions system, SMH

GregbkH said:
I don't think that is true. After looking at my quote from the op and reviewing the link he posted, the EPA is talking about aftermarket high performance parts ( exhaust = headers ) as well as emissions equipment. Not just solely the latter.
Click to expand...

That is how I understood it .


The EPA wants to ban sales of things like Blowers, turbos, headers, and other performance equipment.

Even when they are solely going to be raced and not driven on the street.

From another quote in the article, California state is not even on board with the EPA on this... and they have the most stringent laws- but have a carve out exemption for raced vehicles.

here is the current status of HR 3281 the RPM Act

Moss and others may be right about much of the EPAs response was triggered by the estimated 550000 deleted diesel trucks,

The EPA has prosecuted pollution-control tampering on trucks, cars and motorcycles. And the stakes have been raised.

Vehicle enforcement had traditionally meant civil suits, but in 2018 the E.P.A. began to press criminal charges using a provision that was previously applied only against smokestack industries.
That increased penalties to companies, and added the threat of jail for management.

The Clean Air Act has no exception for racing.

Yikes! That might be another reason it's getting less use.