I thought I saw on here a thread on FEL wear blades and can't find it after searching for 30+ minutes tonight. What is a good bolt-on material or add-on for a FEL wear blade for snow etc on concrete?

I bought a wear bar for my BX which I leave on all the time, but also drilled holes in that so I can put a urethane edge on in the winter so I don't tear up the concrete. The only regret is that I didn't totally understand how the urethane edge would be attached, so I ordered it with measurement for the inside of the bucket instead of outside, but not a big issue. Attached are some pics of the wear blade with edge attached and also the lighting I wired in at the same time. 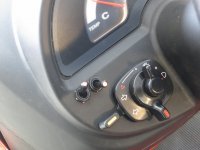 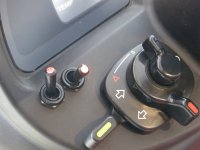 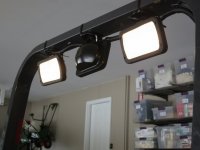 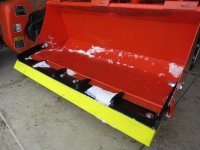 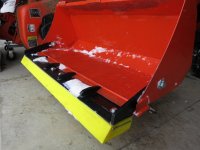 The first winter I had my B7500 I saw the welded-on factory bucket edge wear enough to convince me it needed protection. That came in the form of a stainless steel wear rdge I bolted on. It worked fine for the 10 years I had it. When the L3200 replaced it this year, one of the first things I did was look around the oddball stainless pile at work. Fortunately there was a nice piece there that was even heavier than the one I used on the first Kubota. The edge is held on by short studs that are plug welded into the stainless so it's smooth on the bottom. The last couple of inches on either end are ground so they curve up slightly - that way they can't dig into the asphalt. It has already seen close to 20 hours of dirt work. Here's a pic I snapped with my phone yesterday after the 50-hour servicing and a good scrubbing. 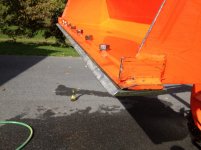 I've seen a couple of pics where people have taken HDPE black water pipe (flexible stuff that comes coiled). a slit is cut in it and slipped over the edge of the FEL and/or rear blade. Protects the edge and doesn't dig in.

Chim- what is the thickeness of that metal? I need to replace my cutting edge and would rather do something like that than have to cut off the old and weld on the new. any pics of how you welded the studs in place?
Oct 21, 2012 #7

CBW1999 said:
Chim- what is the thickeness of that metal? I need to replace my cutting edge and would rather do something like that than have to cut off the old and weld on the new. any pics of how you welded the studs in place?
Click to expand...

It's 1/2" and should last as long as I do. The previous (B7500) edge wasn't that heavy and I couldn't damage it in 9 winters. To remove packed snow the tractor spent time on the cutting edge and two rear wheels.

I can take a couple pics if you want but the welds are not visible. What we did was drill plain and slightly oversized holes the threaded studs would pass through. Then the blade was placed upside down on a steel welding table. It was blocked up so the studs could be dropped into the holes and end up being below flush. Then the stud / hole were welded full and any projecting filler metal ground flush so it wouldn't make scratches on the driveway.

The hardest part was making the 45 degree edge. I started off with a big angle grinder and progress was painfully slow. One of the (real) welders saw me struggling and broke out the portable plasma cutter. He set up a guide to use as a rip fence and made pretty short work of it. Then he had his helper finish the grinding.
Oct 21, 2012 #8

That doesn't sound too bad (up to the angle part). Was it tough getting things lined up and drilled on the FEL? I wonder if making a simple jig would work to use of both pieces.

Measure twice, drill once. It wasn't too bad. The factory edge isn't as hard as you may think.