Hypertherm 30 vs Hobart 40i for first plasma cutter.

(removed) said:
Till you run it at Carbide or other ceramic manufactured metal. Give it try, you ain't gonna hurt de machine or de carbide.
Click to expand...

That's when you either forget why you NEEDED to drill/machine carbide/tungsten, or dig in your wallet a couple orders of magnitude DEEPER than that plasma cutter

Back in 1980 I was just starting a job in industrial instrumentation in a rare metals plant; got handed the VERY dubious honor of being responsible for the GREAT GRAND DADDY of EDM's - my company had a small military contract to make "steering vanes" for a certain missile.

The vanes actually sat IN THE FLAME of the rocket propulsion, and were cast from SOLID TUNGSTEN in order to withstand the heat. They mounted to actuators with 3 holes that WE HAD TO DRILL

My "nemesis" was already old when I got there - It was what's now called a "Sinker EDM". It had a 1200 volt power supply and was all TUBES; to get around the current limitations, it had 18 "beam power tubes" all bussed together in parallel. The idiot who ran that dept was incapable of learning, so I had to explain to him every time he called, that tubes start out in a slow descent into FAILURE - He never DID get smarter, just kept saying "it USED to burn that fast"

Back to plasma; my PM45 needs to be "sorta" portable, so it sits on a rollaway tool cabinet (which doubles as consumable storage for MIG, TIG and Plasma) - my compressor is the SMALLEST industrial one the local compressor store sells (5 horse Baldor, 80 gallon, inter-cooled, pressure lubed all cast iron, 21 CFM @ 175 psi) - so for "portability" I put together a "helper" separator 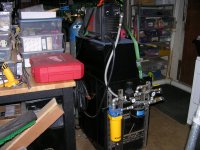 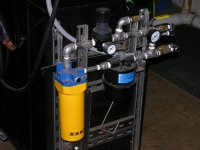 full pressure air enters top right in the pics; goes thru a "pre-regulator" down to 125 psi, then thru a "painter's filter" with a water drain, then a Motorgard filter and up to the plasma.

I get several hundred feet of cut on a set of consumables, for me that's more than acceptable.

Can’t go wrong with hypertherm. Performance and consumable life can’t be beat with outstanding manufacturer support. Use coalescing air/water filters that Hypertherm recommends. My xp45 has a self draining one inside. Use much bigger one outside before the cutter.
Dec 14, 2020 / Hypertherm 30 vs Hobart 40i for first plasma cutter. #24
3

I've been looking at plasma cutters for awhile. I plan to use it on 1/4" and less for most of the cuts. An occasional severance of 3/8" or 1/2" steel bar so Hypertherm's 30xp should do the job. However, I have one project coming up that I will need to cut a curve in 1" steel that is 5' long. The 45xp can do it according to the specs. Since this is a single instance of the 1" material, i'd rather farm it out to a machine shop, but all the ones around here can't do 1" either. So, even though the 30xp is rated at 5/8" severance can it be made to cut 1" even if the cut is not clean? I figure I can always clean it up with a grinder.
Dec 14, 2020 / Hypertherm 30 vs Hobart 40i for first plasma cutter. #25
U

You'll be much better served by O/A or O/P cutting 1" than trying an under capacity Plasma.

3Ts said:
I've been looking at plasma cutters for awhile. I plan to use it on 1/4" and less for most of the cuts. An occasional severance of 3/8" or 1/2" steel bar so Hypertherm's 30xp should do the job. However, I have one project coming up that I will need to cut a curve in 1" steel that is 5' long. The 45xp can do it according to the specs. Since this is a single instance of the 1" material, i'd rather farm it out to a machine shop, but all the ones around here can't do 1" either. So, even though the 30xp is rated at 5/8" severance can it be made to cut 1" even if the cut is not clean? I figure I can always clean it up with a grinder.
Click to expand...

In my area there are several shops with water jet and laser cutting capabilities. That 1” sounds like a great match for one of the water jet guys.
Dec 14, 2020 / Hypertherm 30 vs Hobart 40i for first plasma cutter. #27
U

It's good to know what's in shops in your area. One near me has a policy encouraging employees to bring in "government jobs" to fill time on their CNC cutting and bending machinery. Management has no aversion to de employee makin a little side money and only charges employees scrap value on material if de job can be indexed into a job makin scrap. Management call it ongoing employee education since guys improve der skills.

Big farm equipment maker over by Batavia has predumpster area where employees can shop for material headed to scrap. Rule on dumpster divin is 1 man in dumpster 1 man on safety watch. Dey generate a lot of cutoffs because of der QC standards. Wait time to get hired der runs over 10 years.
Dec 14, 2020 / Hypertherm 30 vs Hobart 40i for first plasma cutter. #28

I have 45xp. I wouldn't attempt 1in without expecting a long slow painful mess. But the difference in cutting speed between the 30 and 45 was enough for me along with the thicker severance cut ability.
Dec 15, 2020 / Hypertherm 30 vs Hobart 40i for first plasma cutter. #29
B

I have the older PM45, it's rated for up to 1" cuts - did that ONCE, came out looking OK. I used a straight edge (as in, a fairly thick 4' long ruler - the chart in the manual says 1" mild steel @ 4 inches a minute. Do the math; that's 15 SECONDS PER INCH. I was in the military just long enough to NOT have a problem counting seconds, I can count off seconds for a minute and be within 1-2 seconds either way -

Compare that to cutting 14 gauge sheet - even turned down to 30, I can't MOVE fast enough to get ahead of the machine's capability, even with a well-clamped straight edge. 'Nuther plaz advange over O/A - kinda hard to run out of gas at the wrong time (as long as you pay your electric bill on time) :laughing:

IMO, aside from the Hypertherms not bein' the CHEAPEST around, the biggest problem with plasma is if you buy too SMALL, you're either stuck with its limitation or you buy BIGGER next time - if you're NOT tryin' to cut metals more exotic than mild steel, my solution is to get the biggest plaz you can afford (or think you'll need) - then, don't forget that O/A torch sittin' in the corner - My O/A setup is older than a lot of members here, still works fine. Got some craftsman stuff from the original (tips small enough to do jewelry) some Smith, Victor, and Harris from various sources.

After finding out how painful it was to use the plaz on 1" steel, I went on Da Bay and found 3 more sizes of O/A cutting tips - nearly brand new, $10 apiece. My size 5 tanks can handle the flow, now my upper end is at least 4" thick.

My Victor 300 series torch also lets me heat something up to bend it, WITHOUT slicing clear thru it; ANOTHER advantage over plasma. I DO really like using the scarfing tip on the plaz tho, it's about 20 times more "surgical" and at LEAST 20 times QUIETER than air arc. (I also don't own any welders I would subject to THAT torture...)

I think each person needs to HONESTLY assess what they're pretty sure they'll need to do, and at least START with the tools they KNOW they'll need - After that, it's more the individual's choice (along with circumstances) as to whether you define "need" the same as "want" - a trait I've been accused of more than ONCE ... Steve
Jan 18, 2021 / Hypertherm 30 vs Hobart 40i for first plasma cutter. #30

I've been following this thread and looking at getting my first plasma cutter. Hobbyist, small fab work, with sheet metal or up to 1/2" max plate. A unit that is "Made in USA" is my plan ("The job you save may be your own", your kids or grandkids...). Miller, Hobart or Hypertherm is my focus. My question is about the air drier advice.

For my newbie - occasional use, is dry air such a big issue? What does moisture do to the consumables? I have the smallish air driers in my compressed air system, which have been okay for auto painting. Do I need more, if so which?
You must log in or register to reply here.
Share:
Facebook Twitter Reddit Pinterest Tumblr WhatsApp Email Share Link