I like the Eagle cans. Fact they are made in WV is an additional perk...

I have a couple of the No-Spill cans and Oi like them.
I bought a 5g diesel can and a 5g gas can as well as a 1 g gas can for mixed fuel for the weedeater and stick edger. 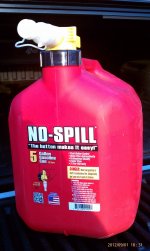 Gary Fowler said:
No way would I agree. That new design is a POS. I bought one out of necessity, used it one time and the next time, the valve wouldn't open. The collar would just turn then click shutting the valve. I had to remove the valve assembly and now it is just a spout. WHO figured that you need to twist a collar, pull back on it at the same time while trying to hold up 5 gallons of fuel and keep the spout in the filler neck. Biggest bunch of idiots ever that came up with that design.
I don't mind the older type where you slide a switch then you can push down on the handle to open the valve. However it seems that they all should come with some sort of over-pressure relief valve. I have seen mine round up like a ball from setting in the sun in summer (empty) and then suck the sides in due to cold (not good for the plastic)
Click to expand...

Not that I can agree with.
Last spring my wife started driving a newer Jetta (gas)and seldom looks at the fuel guage as the other car was a Jetta TDI.
Almost a week later she call that she was out of fuel (she has never ran out of fuel). I was closer to HomeDepo than home and was in need of a newer can I picked one of those PIA units with that valve in it. On sale.... now I know why.
When I went to put the fuel in the car ,the valve would not open. Thinking it was a mans problem with reading instructions, the ladies had a crack at it too. Not a chance it was going to open, so I remover the spout and taped a short piece of 1" pipe in the neck that I had in the truck and got them on the road.
After a few days I looked at the darn thing to see what the issue was and now it pours fine, I cut the valve out to make it normal again.

I use this 40 year old metal can for my mixed fuel: 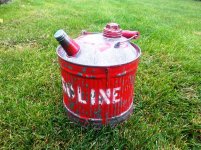 Tractor
a fleet of them

I thought more about it and realize it is closer to 40 years. I got it in 1976 when we got our first house.