Im going to try and build myself a mini digger, similar to the one pictured.
Its a small machine with just under a 2x4 base, powered by a Honda GX160.
Without the tracks - given the cost of the tracks, motors, roller wheels, sprockets, rotary union, and a turret bearing large enough for the union, it'll have 2 roller wheels and 2 legs.
Anywho, I was going to use 1/4" steel plate, but the pictures look like it might be a 5/16 or 3/8 (or, given the country of origin, 8 or 10mm) 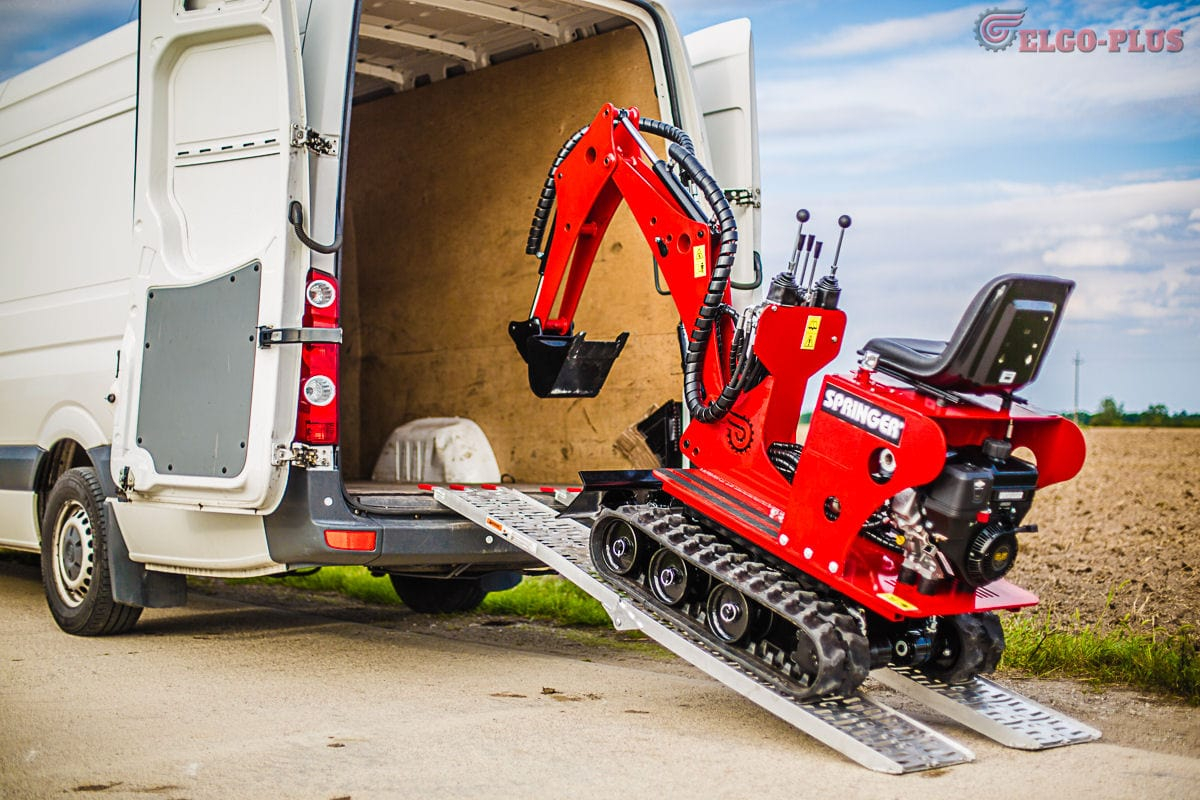 Seems like an interesting project. What service will you do with it?

I think 1/4 is pretty thick... what parts are were you considering going so thick with?

Thats also a TON of weight.

I got sent to Brokk school several year ago to be a certified remote controlled excavator/breaker operator. This thing reminds me of those Brokks. They were fun to operate, but also dangerious. Many times, I found myself deep under a building, digging out footers. Running an excavator on my knees remotely. Or standing near the edge of one roof, looking down at my Brokk being suspended from a crane hammering out a different roof below me.

Anyway, thats why I asked about the reason you want one. What small, confined space will you be using it in? Would a backhoe or mini-ex serve you better?
Dec 6, 2022 / Metal Thickness? #3
OP
B

I was thinking about using the same material on the whole thing (or, "body)
I have about 2 sqft of 5/8th plate, anything else I would need to buy.
Local metal shop doesn't have scrap, and only sell 4x8 sheets. One sheet should do it, and given the cost, I only want to buy one.
It looks like they did the same thing here, as the boom and base are all the same thickness.

Ill be using it in the Arizona sand to dig trenches for sprinkler pipe, and a future block wall footing. Past that, just random digging projects.
I have a ditch witch now, but its absolutely miserable in the sand. Its like Atreyu trying to pull the horse out of the mud in The Neverending Story.
I've thought about mounting a winch to it, so it can pull itself along. If I can successfully build this, selling that clunker should mostly pay for it.

Pic here, looks a bit thicker than 1/4"
I like that the hydraulic tank is the seat, but I don't see a filter.... 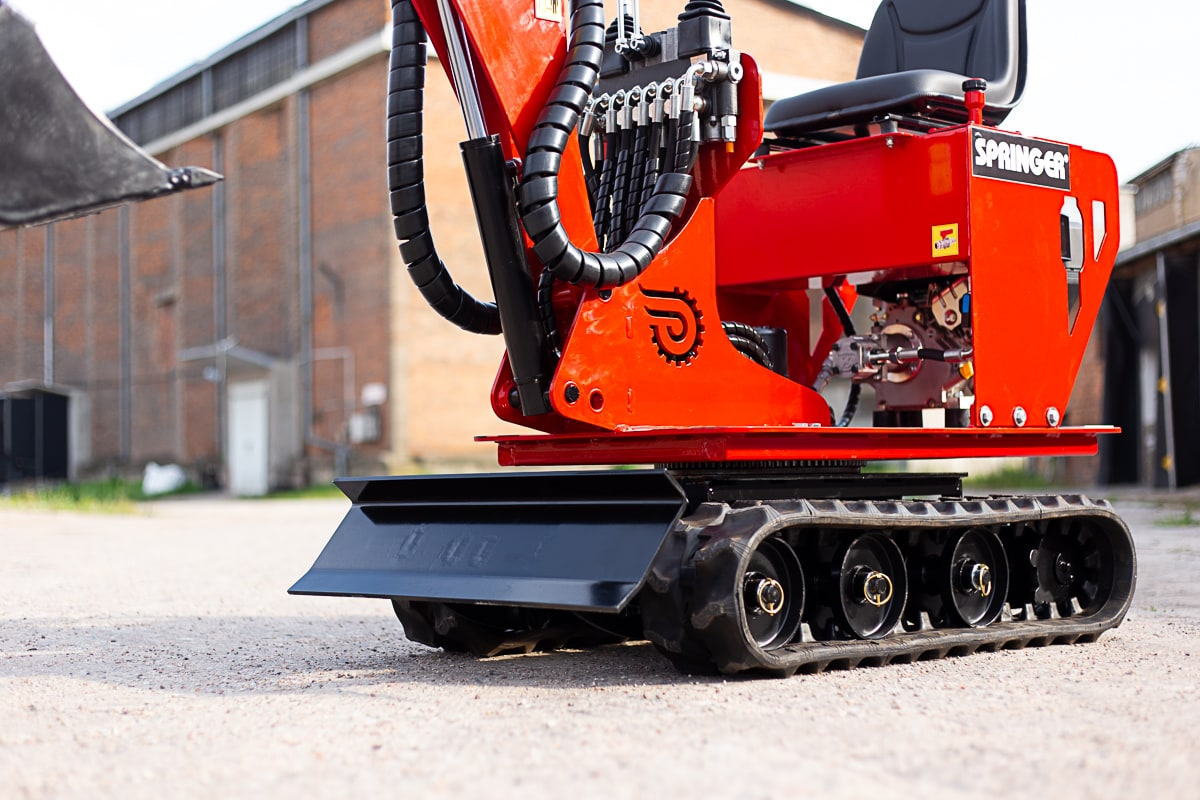 Sounds "Penny wise and pound foolish" if you are going to spend 1,000 hours designing and building a machine when you don't even have a clue about materials requirements to save a couple hundred dollars in machine rental fees.

Construction equipment these days are appliances like toasters and you are paying by the pound weight. It's not like an iPhone that costs $80 in parts that sells for $1,500.

If your goal is a fun expensive hobby then I take back these comments. What I glean from your initial posting is you want to dig a hole and don't want to spend $$$ on a new machine.
Dec 6, 2022 / Metal Thickness? #5
J

mikester said:
Sounds "Penny wise and pound foolish" if you are going to spend 1,000 hours designing and building a machine when you don't even have a clue about materials requirements to save a couple hundred dollars in machine rental fees.
Click to expand...

If you enjoy tinkering for its own sake, then by all means, but designing and building your own excavator is not a way to save money. Of course, you can build something which will work, but, for how long? And how well? Very experienced equipment manufacturers spend immense amounts designing and constructing competitive, desirable equipment. You may be inspired to improve a small detail, but there is no way you can "better" or "economize" a whole machine.

Letting alone material thickness for a minute, boom elements must be tubular, rather than parallel plate for torsional stiffness. Where parallel plate is the only way (at the joints), it's got to be thick to be stiff.

The machine pictured is certainly "cute", but I doubt very practical compared to renting a "real" mini excavator. My first observation is that it has only one hydraulic pump. That means that if more than one function can be run at once, it'll steal hydraulic from another function, so it slows down. There is little "fluid motion" with this type of system. Digging with one function at a time is painfully slow. Three pumps are the common arrangement, with that, you can dig smoothly. Another observation is that there is a minimum practical weight for mini excavators. Too light is handy for getting it into the back of a van, but it won't have the oomph to dig into hard ground, or resist pulling against the bucket (you'll pull it along the ground, rather than digging a trench). And, when it breaks, your jobsite work just topped, while you [try to] load it up, to take it home to tinker more. The rental machine gets returned, and they replace it with a working one.

Your homemade excavator is going to have close to no resale value and judging by how things are going so far I doubt it ever moves dirt. Do yourself a favor and just go buy one. You can start work tomorrow and it holds value. Equipment manufacturer aren’t making tons of money to assemble it anyway. You’d spend the asking price to buy the material.
Dec 6, 2022 / Metal Thickness? #7
OP
B

Sounds "Penny wise and pound foolish" if you are going to spend 1,000 hours designing and building a machine when you don't even have a clue about materials requirements to save a couple hundred dollars in machine rental fees.
Click to expand...

Couple hundred?! Its $500 a day, or $2000 a week, and you have to put your name on a waiting list where you get notified the evening prior to the machine delivered.
AND! If you don't have a 1 ton truck and trailer, you have to pay the $500 delivery fee. I live within viewing distance of the rental yard, and they wont let me drive it here; but when they deliver it, they drive it. Jerks

If your goal is a fun expensive hobby then I take back these comments.
Click to expand...

If you enjoy tinkering for its own sake, then by all means, but designing and building your own excavator is not a way to save money
Click to expand...

Calling this thing an excavator is a huge stretch. More like a power assisted shovel.
Now, Aside from the drive train, which I said I was ditching anyway - I could buy all the material, hydraulics, plasma cutter, a better welder, and a predator engine to power the thing, and still be well under the price of a new one.
Not only that, I think if I did use 1/4" material, and it bent, I would still have money left over to build version 2 out of thicker stuff.

Maybe the scale of the thing isn't coming across. The operator platform (or cab?) is less than 2'x4'
I put the images into Fusion 360, and calibrated using the known base dimensions to get the dimensions of the boom and arm, I don't remember what they are, but the boom is just under 3' long. Where its pictured driving into the van, at that stance its probably 7' long.

I agree on the money spent on every aspect of equipment, but this is not a John Deer or a Caterpillar, or even a Kubota. This is a cheaply made Chinese machine, being exported and rebranded all over the world. (except the US it seems)
Those aren't the cast iron track rollers you would find on a bobcat, those are stamped and formed steel rollers. It does have a steel cog wheel, but not the same quality you would find on a US machine - but it doesn't need to be. Each one is only responsible for moving a couple hundred pounds, unlike a Bobcat, where its closer to 7000 pounds.

Those are 180x72x31 tracks - dirt cheap ... in China.
31 being a less common size, but if you go with a 180x72x39, they are less than $80 each, unless you buy 25+ then you get the 50% off bulk price. But, shipping one set isn't cost effective compared to just buying them from someone in the US who imported hundreds of them to sell at a massive markup.
If you go with a 180x64, you get into modern snow mobile size, and more track wheel options (the more there are, the cheaper they are)

Simple fact of a 'real' machine is the quality, and mostly built to last. The manufacturing and markup on quality equipment is a whole subject by itself.
This is neither. Its a cheaply made machine with a huge markup. Most common complaint with cheap machinery is the lack of replacement parts - and there are many reasons for that which is a whole discussion by itself.

The machine pictured is certainly "cute", but I doubt very practical compared to renting a "real" mini excavator.
Click to expand...

Of course. You aren't using this to break up concrete and load a dump truck.
You are using this to dig trenches for sprinkler pipe, holes for trees, and footings.
Its a small, light weight machine made for small uses.
You shouldn't compare this to anything that has more than one cylinder.

My first observation is that it has only one hydraulic pump. That means that if more than one function can be run at once, it'll steal hydraulic from another function, so it slows down.
Click to expand...

Well yeah, but that's common on most machines.

there is a minimum practical weight for mini excavators. Too light is handy for getting it into the back of a van, but it won't have the oomph to dig into hard ground, or resist pulling against the bucket (you'll pull it along the ground, rather than digging a trench)
Click to expand...

Correct. But again, you need to remember is use - light duty use. In my case its sand.

rental machine gets returned, and they replace it with a working one.
Click to expand...

Not all rental places are created equal, at my local rental yard if it breaks, you pay for it.
They require a couple thousand dollar retainer to cover any equipment damage and mechanical failure.
This bother me, because if you are renting a machine with a few thousand hours on it, can you really be held responsible if the pump dies while you're using it?

Sure, tinker and build to your heart's content, but if you value your time, and have a job to do on time, use a proven tool....
Click to expand...

For light duty, this could save you all the effort/headaches of building....

I'm all for the "Build it yourself" mentality. There was a member here from Eastern Europe that built a curved boom backhoe and started (I don't know if he finished) an excavator. Both rivalled the best you can find on the commercial market. But this member was no hobbyist fabricator. His skill in design, fabrication and welding was nothing short of amazing.

You just said you have a cheap welder and aren't the best. I'm going to assume your skill set is in the same realm as mine. Capable of a decent repair, maybe some light fab work, etc. I'm proposing a middle ground. Why not find a digger like WranglerX linked and fabricate a vehicle (track or wheeled) under it? At least 60% of the rig will then be built for you already.
You must log in or register to reply here.
Share:
Facebook Twitter Reddit Pinterest Tumblr WhatsApp Email Share Link