My New to Me TC40D- Dilemma, fuel solenoid

I had a similar problem with my TC45DA and it turned out to be the ignition switch. The switch had to be "just right" for the solenoid to operate and engine start. Check out this thread http://www.tractorbynet.com/forums/new-holland-owning-operating/195255-tc45da-ignition-switch.html I replaced the plastic switch that kept on melting with one from NAPA never had another problem
Dec 7, 2013 #12

Jackfr said:
I had a similar problem with my TC45DA and it turned out to be the ignition switch. The switch had to be "just right" for the solenoid to operate and engine start. Check out this thread http://www.tractorbynet.com/forums/new-holland-owning-operating/195255-tc45da-ignition-switch.html I replaced the plastic switch that kept on melting with one from NAPA never had another problem
Click to expand...

Firstly, reconnect the safety switches. They are there to protect both you and the tractor. Secondly, I was thinking the same thing as Jack about the ignition switch. Do the headlights work when the switch is turned on? If they don't it points to a bad ignition switch.
Dec 7, 2013 #14

All power for the fuel solenoid comes from fuse #2. If fuse #2 has no input power from the ignition switch, neither will any of the other fuses. The whole tractor would be essentially dead. However, if the ignition switch is bad, it does provide the power to the neutral start relay through separate contacts than the power to the fuses. That means the starter will not crank over. There is no way shown on the wiring diagram for the ignition switch to only disable the fuel S/O solenoid so that the engine will turn over but not start. If the engine spins, but does not fire, it is either the seat switch, the oper safety module, fuel S/O relay, or fuel solenoid. I don't mean to disparage anyone's remarks, but the circuit is what it is.
Dec 7, 2013 #15
A

The ignition switch is in fact "touchy". I do agree it could probably be replaced also, but I don't believe it has anything to do with the fuel solenoid. If you turn it "wrong", the lights on the dash don't even light up, wiggle it, and everything is fine- that may be my next fix after I reconnect the safety switches.

I agree that they are there for my own safety and would like them to function. The seat has been replaced with an aftermarket and doesn't have the switch or any wires coming out of it.... that one will be last. The PTO and Parking Brake I want working.

Does anyone have any actual photos of the wires going directly to them? I believe they are there, just want to see someone elses, makes it easier for me... When I was checking the connections on the bypassed PTO switch, I noticed the PTO light actually came on (Which I havent seen since I've owned it), although, it shouldn't have come on while it was not engaged.

I checked the Fuel Solenoid relay, its fine, not sure how to check the Module, but I did notice that there was a fused, switched positive lead of the back of the ignition switch that was taped up, not going to anything. So, I did just wire that to the Fuel Solenoid and it runs just fine... after it bled the fuel lines, by itself... Nice feature! I replaced the fuel filter while I was there- My MF200 has to be bled manually, slight pain in the neck-

I also searched and read a lot of info on the temperature gauge... mine us usally cold, below the green, but if I'm mowing or running it at 2500 rpm constantly it will get to the green, otherwise, just driving around it stays below the green. Anyone else like that, or should it be in green even at lower rpm's?
Dec 7, 2013 #17

Here is a photo of my seat jumper. You can see the switch between the seat base springs. I just disconnected the plug and put the spade jumper between plug connections. The switch is normally open and closes with your weight in the seat. 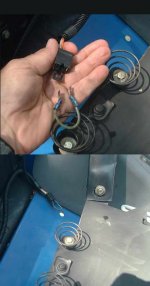 I'll discuss the temperature/thermostat issues in the morning when I have more time and references. I agree that you really need a new ignition switch, either New Holland or a similar 3rd party switch. Also, since your interlocks have been "messed with," there is no way of knowing if the wiring represents the actual schematic or original wiring. Returning it to as close to original as you can is another excellent idea.
Dec 8, 2013 #18

There are three issues that can have a huge effect on your temperature reading.

1. On early model tractors, there is a block drain hose that goes from the engine block to the radiator. It looks like 3/8" fuel line/heater hose. That hose provides enough bypass so that in cool/cold weather, the engine never heats up as it should. Below is a photo of a cutoff valve a member installed on his tractor (not me). I installed a brass needle valve on mine, but in the exact place shown for this valve. 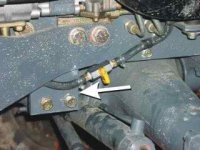 3. The third problem is that the temperature gage often goes out of calibration due to age, moisture, and sun exposure on the inst. panel. To test the gage, Pull the wire off the temperature sending unit as shown below. Pull the plastic back on the wire end and hook an alligator clip to the female spade connector. Leave the sending unit disconnected. Now, take the other end of the alligator jumper and attach the alligator clip to a good ground like the ground lug on the back of the alternator. Next, turn on the key while watching the temperature gage. If the gage goes to the maximum reading all the way up in the top of the red (2nd photo), then the gage is okay. If it only rises part way, then the gage needs to be replaced. The gage is sold individually by New Holland. If you have to do that, I'll send you a set of photos showing how. 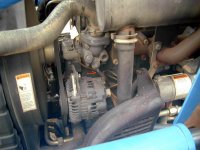 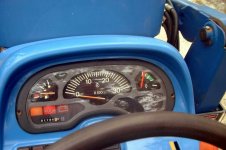 Happy New Year! Thanks for all the information... I finally got to the thermostat issue. I opened up the housing and there was not a thermostat present! Apparently the previous owner removed it. Being Saturday, my local dealer closed at 1pm and it was 12:50 of course. I called up there, they had the parts and left them outside the door for me (after paying of course). It's funny, cause I just replaced the thermostat in a Jeep that I have and it was $4, this sucker was $40! Must be made of Gold-

In any case, I put it in and the temperature looks great now! Woohoo.

It's really too bad you paid such a high price for the thermostat. With dimensions of the mounting flange, you could have bought a new one at NAPA or even Walmart for less than $10. You can even order them from Amazon.
You must log in or register to reply here.
Share:
Facebook Twitter Reddit Pinterest Tumblr WhatsApp Email Share Link