Power Line to my house was broken 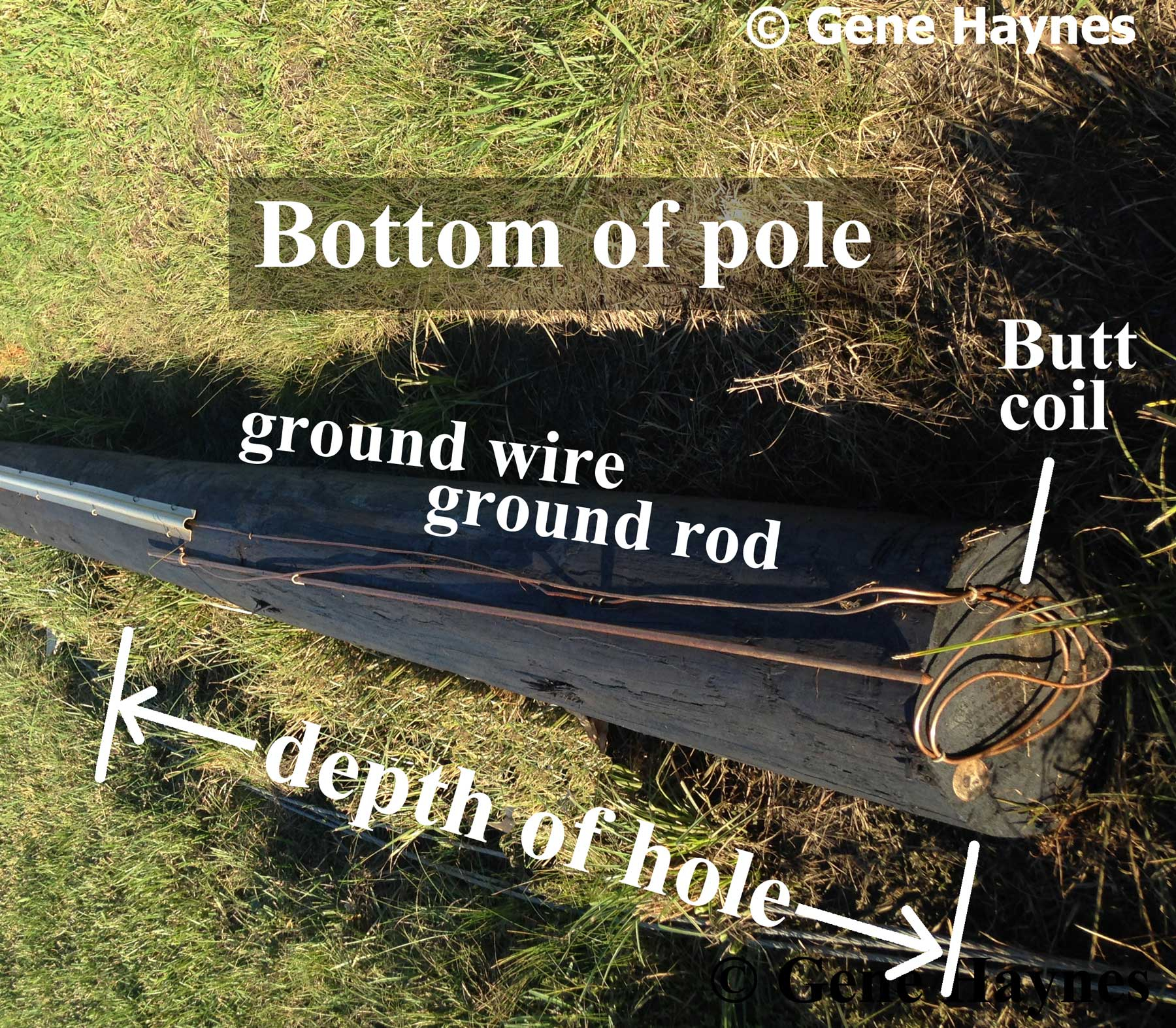 I thought I had mentioned this up thread but maybe I only thunk it.

Years ago they were replace power poles in town, and before they put the poles in the ground, the poles were just laid out along the side of the road. I noticed that all of the poles had a copper wire running down the pole and at the bottom of the pole the wire was in a nice, neat coil. The coil and wire were stabled to the pole.

This was when copper theft was a big problem and I thought they were taking a chance leaving the poles out with that tempting copper just sitting there. Best I could tell, none was stolen.

We have had so much growth, the "new" poles are being now replaced with bigger and taller poles.

coobie said:
Never seen that before here in the north country ..
Click to expand...

Me, either, but I wonder if it has a lot to do with the soil depth that you can expect a reasonable ground at. Soil that is too dry / too sandy / too rocky isn't going to function well.

Or do you think it has to do with grounding lightning strikes better?

Either way, this has been a really interesting thread. Thanks to everyone for contributing. Personally, I find it hard to believe that @EddieWalker is still partially wired...

Still not fixed. I'm hoping that with the rain coming fairly steady, the ground will remain wet and I'll continue to have a good ground until the fix it.

I've been wracking my brain to try and remember how they did the ground wire on the poles when they installed them. I remember seeing a guy unroll the copper and staple it to the pole when it was still laying on the ground, but I don't remember what he did with it at the bottom of the pole.
May 11, 2021 #237

I hope that you stay safe. With the rain, I certainly expect your home grounds to be going to stay in good shape.

A related update:
In the process of adding battery backup to the house. It is a process. In our case, a very long drawn out process because the battery supplier hasn't supplied very many batteries last year or this year. As in we ordered the batteries spring 2020.

Well good things come to those who wait, or so I have been told. Batteries finally arrive at the electricians.

First the main panel has to be replaced with one that has upgraded 225A busbars. Get the power company out to cut the overhead wires. Literally. The lineman crawls on the roof and cuts the cables, wraps them in electrical tape and leaves. Cut the old panel out of the side of the house, pull the old service drop (4/0Al!), install new service drop (copper), install new panel, reinstall existing circuits. Wait for the lineman to come back. He does, and splices the old overhead wires into the new service drop and leaves. House back on six hours later. Everything works.

Now comes the fun bit; you have to turn off the house power to move the house circuits out of the new (3 day old) panel, into a newly installed backup panel, and install a 200A breaker in the main service panel to feed the automatic transfer switch and backup panel. Following this? Yes, the wiring gets convoluted, but all according to NEC rules.

After moving the wires, turn the main service disconnect on.

Nothing happens. No power. The smart meter is blank. I figure that a fuse blew on the power pole.

Ok, I will call the power company, but first I get out the extension cords generator and get the essentials on power. While doing that I notice a surge strip with a green LED on. WTH? I go back to the main panel, and measure 16V on one phase. Throw the service disconnect off. The smart meter now comes on as far as reading out idiot lights "88888". Ok, call the power company, figuring the fuse blew on the power pole.

The lineman turns up promptly, he is the same guy who spliced in the new service drop on day one, so he knows what is going on. After poking around, he heads out to check main line fuses farther away, as those have easy access. Ninety minutes later, he comes back; "you need to have your transformers replaced. The crew will be out later tonight, or tomorrow morning."

Not too surprisingly, the crew comes out the next morning, and proceed to drive two large bucket trucks up and across slopes that my slope tractor has challenges with. Thirty degree slopes. They can't get their biggest truck up there, so they have to rig a pulley and winch to lower the old transformers off, and the new ones up. After a couple of hours and quite a bit of work for everyone on the six man crew, it is done. They mention in passing that they had to replace the ground wire for the pole. I am not surprised.(More on that in a moment.) Two years ago, the power company contractors worked on the pole adding rot preventative, and checking the ground, which I happened to see. So I know it was good then.

Moving on. Now, we get to experience the bad news. Flipping the service disconnect works, but then flipping on the main breaker that feeds everything fails. As in "BANG", with lots loud humming and arcing noises, fails.

As all of this happened while the panels were being rewired, the suspicion is on the rewiring, although it is hard to see how. Time to get the rewiring crew back out.

They pull the panels, and start tracing the wiring. Long, long story short, it turns out that there are two tiny teeth (less than 1/8") on the underside of a terminal for a 4/0 main busbar terminal for the neutral wire from the main panel to the automatic transfer switch. One of the two teeth is bent/missing, which has the effect of not completing the neutral circuit, resulting in a floating ground, blowing the breaker.

Whether the increased neutral flow pushed the transformers over the edge, I don't know.

Here is why I wasn't surprised to have a melted ground wire on our transformers: We had a doozy of a lightning storm a year ago, the one that started last summer's fires here in California. Eleven thousand lightning strikes or so. Since then, the power company has been replacing transformers along miles of power lines toward our place. They were due to replace ours the day before this happened, but they canceled at the last minute, so I suspect that they knew the transformers were dying.

Which leads me to wonder if @EddieWalker has had his grounds/power lines repaired.

Stay safe out there.

The short answer is no. Nothing has been done. I looked back to when I started this thread and it was in March. Nothing has happened at the Gas Pipeline Station, where they broke the wire, for months now. I really need to find a good phone number to call somebody that will actually do something. Thanks for the reminder, and for sharing your story.
Aug 29, 2021 #240

Im not sure if texas has a public utilities commission. The puc can issue fines to companies that dont repair work. i had to file on a ziply phone line that i waited on for 2 months for them to pull old pole out and cut dead feed wires. I was warned that if i do it there is up to $10,000 fines. They said they would do it but never showed up. We filed a report and they were out next day to do removal.
You must log in or register to reply here.
Share:
Facebook Twitter Reddit Pinterest Tumblr WhatsApp Email Share Link