Seal comes out the front .. or we haven't seen the right diagram. Removing the 8-bolt cover would be necessary to replace the bearing. (on the bench) Only the shaft being 'slightly' in the way and the job being <knee-high should add difficulty. The shaft will center a new seal for installation but will do nothing to hold it square to bore or make it easier to press into it w/o bending it.

I shouldn't make pounding one in with just a hammer out of confidence sound like an easy 1st time DIY. Might you find a piece of PVC pipe or fitting whose dia ~matches the seal and is a big longer than the shaft protrudes? The longer it is the less likely the seal will tilt as you tap it in place with a BFRH. (big friendly rubber hammer, ~2lb) Get an extra hand or bush the pipe if you can to hold the driver and seal concentric for that first blow.

Regarding the Phillips head screws, those are cross sections of the ball bearings not screws.
Jul 16, 2019 / Rotary mower gearbox input seal. How often gear oil change? #13

I'm finishing my 3rd cup of coffee and contemplating getting my butt in gear and doing something, maybe even productive or not. :dance1:
Jul 16, 2019 / Rotary mower gearbox input seal. How often gear oil change? #14
OP

LouNY said:
Many seals will drive in from outside a gear box,
looking closely at your picture it looks like that one may.
If it does, I have collapsed them and peeled them out,
many people have success running a couple of screws into the seal then prying them out.
Once out one of the hard parts is sliding the new seal over the shaft without damaging it,
then keeping it square in the bore as you tap it in.
Click to expand...

Yeah, I'm afraid to start drilling to run a couple screws for prying and then hitting the bearing......especially if the procedure might be to take off the cover plate and remove seal from the backside of cover plate.
I just don't know.
May 29, 2020 / Rotary mower gearbox input seal. How often gear oil change? #15
OP

Here’s the follow up to this in case anybody else was as ignorant as me...yes I know it’s 10 months later!
Like I tell my wife when she asks me if I’m going to fix the vacuum cleaner: “I said I would and I will! No reason to keep asking month after month!” (Old joke, I know)
Anyways....
-Removed seal from outside with just a couple small screwdrivers.
-Had to be more careful to not bend screwdrivers.
- Rightly or wrongly, I used some plumbers grit tape to buff around input shaft. It felt smooth before and after (i.e. no burrs)
- Luckily I noticed that there’s a metal “spring” ring that’s part of the old and new seals. The old one was left behind on the input shaft when I took the old seal out. I thought maybe it belonged there until I saw the new seal has one “built in” a groove.
- Put some oil on the seal and used a rubber mallet and some PVC pipe to knock it into place. “Looks” seated. Proof will be when I refill. 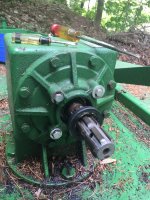 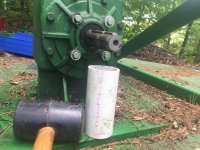 Looks good, if you were doing that this afternoon, hope you were in the shade and had the breeze getting to you.
It's been down right miserable for me working outside the last few days, going from winter to mid summer is rough.
May 30, 2020 / Rotary mower gearbox input seal. How often gear oil change? #17
OP

Yes, I left it in the shade where it gets parked to work on it instead of bringing to the sunny driveway in front of the garage. Much, cooler and nicer there, but 3 times doing the 4 minute round trip walk to the garage for “one more thing” balanced it out. Today is ideal out in sun and cool breeze.

I still think there’s something going on with the vent cap fill plug. Soon as I put a screwdriver along seal, the oil ran out, something makes me think there may of been some pressure. I put a brand new cap on it last year when seal first leaked. Maybe I’ll replace plug with something that vents more “obviously”.
Suggestions?
Thinking a threaded pipe with a 90 degree sweep and a plug with a weep hole?
May 30, 2020 / Rotary mower gearbox input seal. How often gear oil change? #18

Several places have breather vents, one from Surplus Center has a dip stick which could be cut of;
1/2" NPT Breather Cap With 3.75" Dipstick | Reservoir Accessories | Hydraulic Reservoirs & Oil Coolers | Hydraulics | www.surpluscenter.com
Also you can get the stone/wire mesh vents which go into cylinders when used in single acting systems.
I had to replace the one on my generator gearbox it was allowing moisture to get in and contaminate the gear lube.
That was a metric thread and I finally found and umbrella type for it, seems to be working.
May 30, 2020 / Rotary mower gearbox input seal. How often gear oil change? #19

Pulling the cover looks like it might have taken the bearing and shaft with it as well, as those four inner bolts are there for a reason, probably a bearing retainer.
To pull a seal like that, use an awl or other sharp punch to make small holes for a sheet metal screw (or three), then you can pull on them like pulling a nail. I use a scotchbrite disc to burnish where the seal runs, if you haven't removed all the burrs it will chew up the finishing disc and let you know it's there. Pack the area between the seal lips with grease and be sure to drive it on squarely, which you've done, and it should be fine.
For venting, you might see if you can get a sintered bronze fitting, they use them or single acting air cylinders to allow air flow and keep contaminants out. They shouldn't get rained on, so if it can be positioned such or fab up a small shield for it it should be good.
May 30, 2020 / Rotary mower gearbox input seal. How often gear oil change? #20

Tractor
JD2555 and a few Allis Chalmers and now one Kubota

I usually drain the oil and add corn head grease to a gearbox when it starts leaking. Typically the grease and oil aren't supposed to be mixed. If you guys think working on a gearbox in NY is hot, try it in Florida!!
David from jax
You must log in or register to reply here.
Share:
Facebook Twitter Reddit Pinterest Tumblr WhatsApp Email Share Link